Taking that initial step into The Fields, there was a sudden rush of both excitement and suspense not knowing what to expect at the event’s full return after its three-year hiatus.

Luminous rays of light can be seen from as far as the drop-off point, where a horde of Wonderers, both seasoned and newcomers, eagerly marched onto the dusty path that led to the main festival grounds. Greeted by one of the many F&B and wellness areas, it was as if Wonderfruit itself was reminding its attendees to prepare themselves physically for a full four days of experiences. Stalls offering free massages, ice baths, sound healing sessions and copious dining options were full of people…and we hadn’t even gotten to the stages.

Walking through the first stretch of the almost 100-acre grounds used for the festival, we were met with sensorial stimulations left and right. From the echoes of both larger and smaller pop-up stages to the many art installations, phones were out of pockets and snapping shots of everything worth capturing. 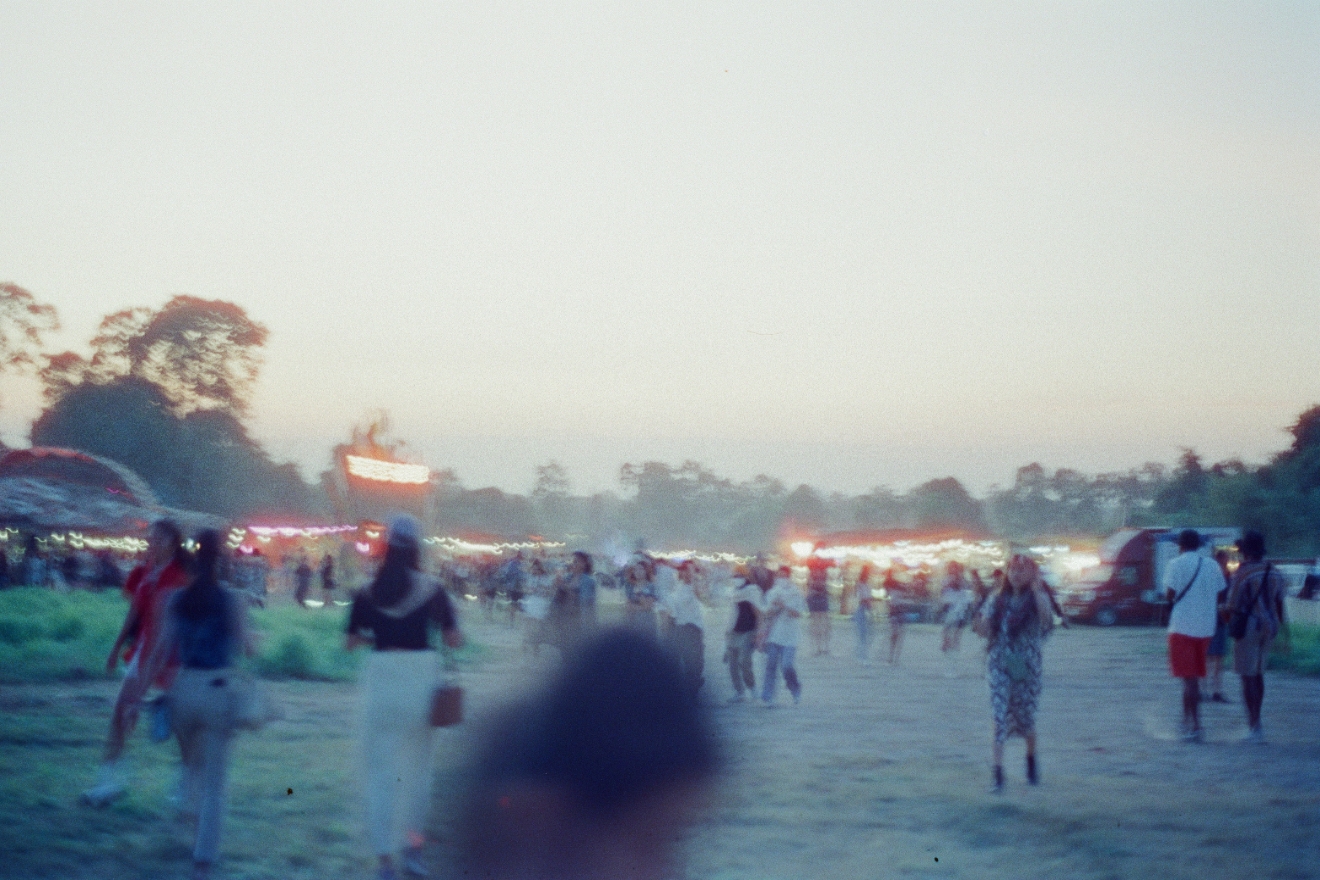 The overall atmosphere was nothing short of overwhelming — overwhelmingly exhilarating. Elated Wonderers donning playful grins were seen pacing from one stage to another, without a care of the distance they had to tread (and trust us, it was quite the walk!).

After experiencing four days of sublime sets, it was hard to cherry-pick what to highlight from all the soaked-in splendour. The somewhat obscurely varied programming by the organisers made sure to not only include something for everyone of every age and preference, but also managed to showcase Thailand’s vibrant culture and why it’s nicknamed “The Land of Smiles”.

Here are a few (personal) pinnacle moments in and around the music from Wonderfruit 2022 that made for an unforgettable adventure in The Fields.

Having the pleasure of opening The Quarry on the first night, Sarayu of Thailand’s More Rice Records welcomed the dauntless crowd into the dark. Adorned with glowing circles atop its open-air wooden dancefloor, the infamous stage came to life on the first day by virtue of one of the country’s hometown heroes and his signature UK-driven sound.

Amidst towering trees, festival goers danced well into his one-hour set, while those soaking in the atmosphere were found sitting on the steps located on the side of the stage. On Saturday, December 17, More Rice Record Store’s music curator, Elaheh, kickstarted shenanigans at The Quarry, slowly but surely filling up the floor. 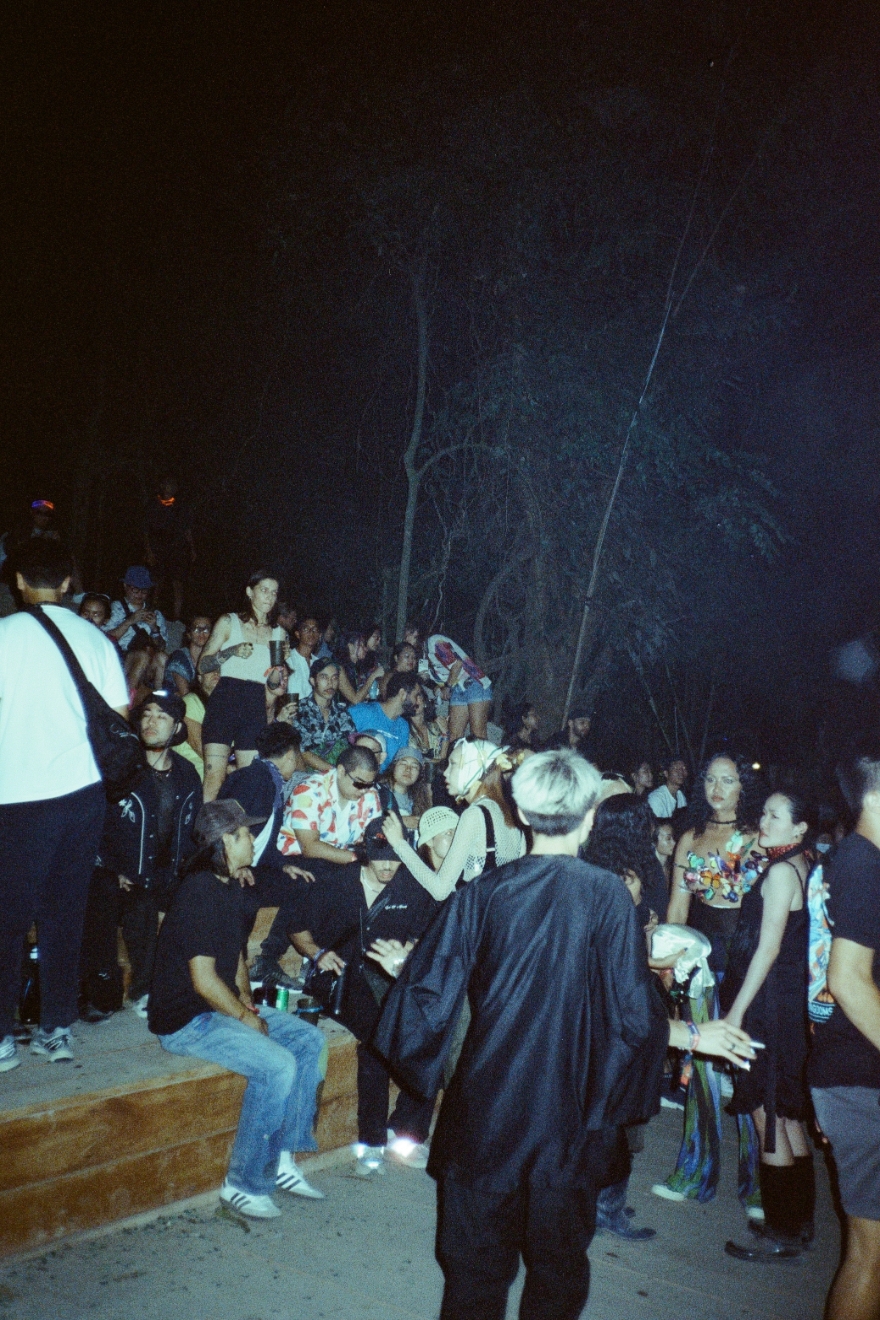 Having built a strong reputation in promoting the underground sounds of Thailand, it was only fitting to see more of More Rice during the festival. And what better way to pay tribute to such a contributing entity than bestowing upon them the honour of closing out the festival? Joined by Ouissam, co-founder of Savage Hanoi, the last set of the year was nothing short of climactic, where carefree attendees gathered around and behind the Solar Village deck, basking in the 11am sunlight without a hint of weariness.

Not gonna lie, but it was definitely a wholesome moment to see familiar faces in real life doing what they do best. UNKNWN co-founder and Philippines Correspondent for Mixmag Asia, Samantha Nicole, let out a beast of a set full of leftfield, techno and surprising transitions at Forbidden Fruit on day one, 1am. Cosmic Tiger head honcho Rocco Universal aka Patrizio Cavaliere (who also happens to be Mixmag Asia's Music Editor) was bestowed the honour of pre-sunset duties at the bright yellow Ziggurat stage with his signature selection of blissful tracks.

Another distinctive release that came out last year was from Hatis Noit who highlighted her mystical vocal artistry in the album ‘Aura’ — hearing it live while sitting on the grass in front of the monumental Creature Stage was pretty much remedial.

Our brothers in beats, Yeti Out, also heated up the dancefloor for a whole two hours at the ever-vibrant SOT, proving exactly why they're considered prominent figures in the region's party and underground music scene.

To not include the immersive experience of the Polygon Live stage would be borderline blasphemous. The colossal structure was unmissable as it radiated lights and 3D virtual-reality sound technology from the far-right corner of the festival grounds. A perfect set-up to enjoy the set of Osaka-based Ground, who emphasises primal, rhythmic beats that blend with his wide range of soundscapes under the pulsating lights. 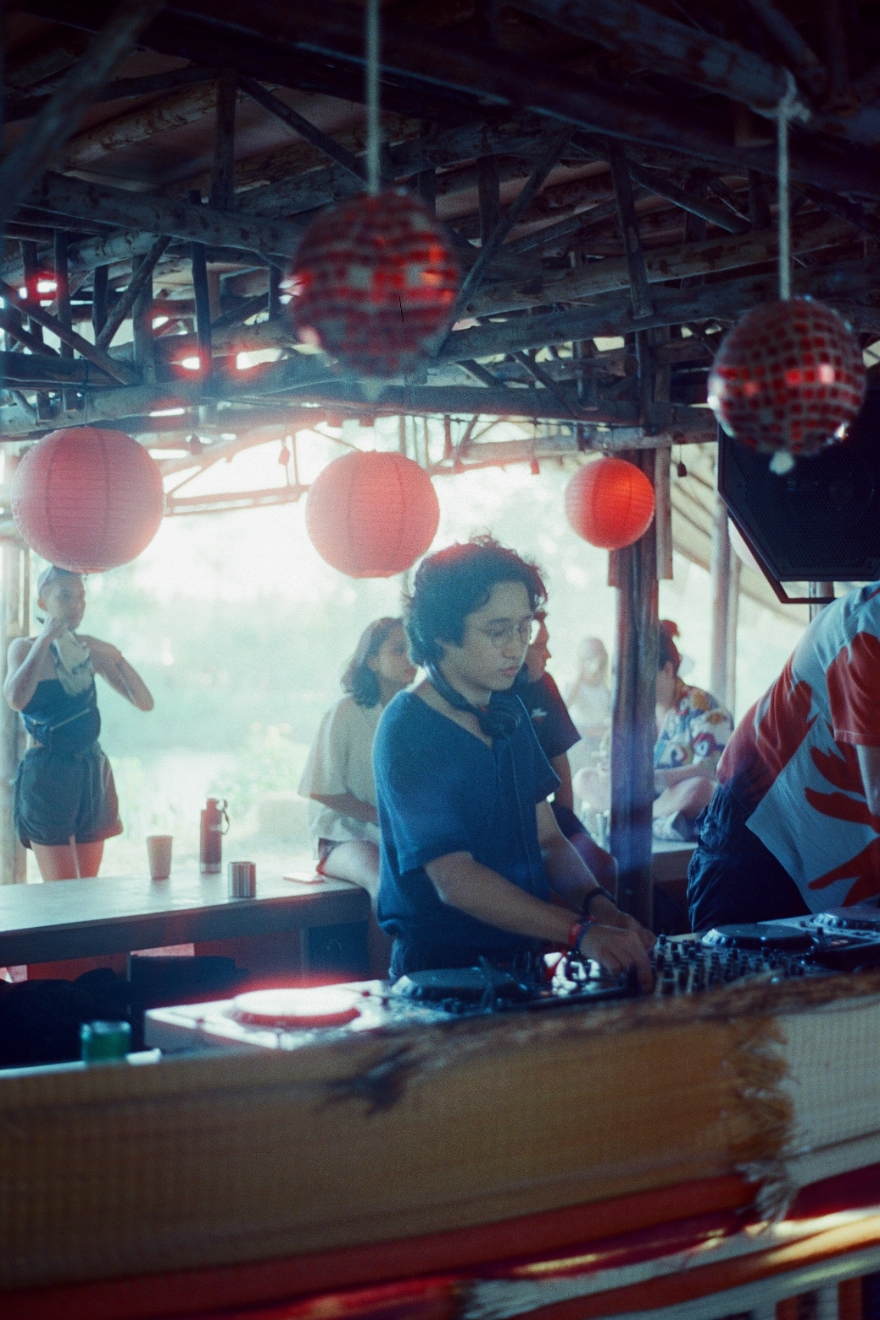 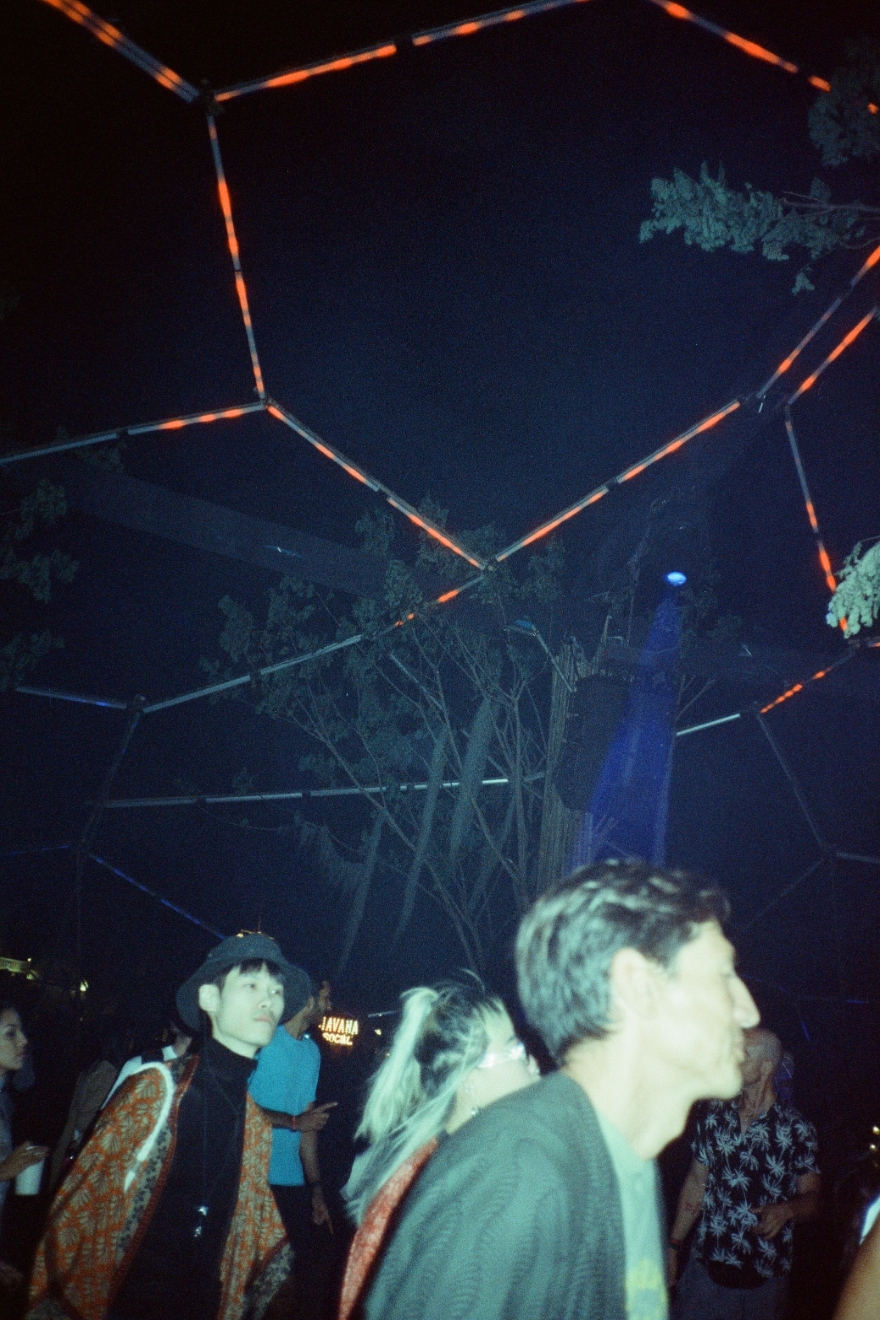 Strong winds close down The Quarry on day three

Might not sound like a pleasurable experience to some — especially for Craig Richards who was not even two tracks into his set — but hey, it was definitely memorable. Around 3am, gusts of strong winds began to blow through the trees that surrounded The Quarry. Attendees anticipating the stage curator’s set were delighted as Richards stepped behind the decks. Turns out Thailand wasn’t the only victim — a cold continental high-pressure front and turbulent East Winds were affecting countries surrounding the South China Sea.

A few minutes into the set, the famously dark stage lit up with lights. Thinking it was part of the immersive experience, the unknowing crowds’ already-lit-up eyes widened even more. However, to their dismay, the circle-shaped screen above the deck hinted at the stage being shut down.

Only then, as The Quarry went quiet, did festival goers take in the sounds of howling winds and rustling leaves. Guarded by the safety of surrounding nature, it took the crowds a slow, trying uphill walk back to the festival’s central grounds to realize just how strong the winds were.

Migrating to safer grounds, most succumbed to the luminous glow of Solar Village and its grand wooden structure that conveniently provided "resting pods" for those quick enough to hop into one. For the next few hours, we were soaking in the set of London's Jonny Rock which ascended in rhythm in accordance with the first few minutes of sunrise.

Just when the first hours of the last day come creeping up and ravers scurry to find a seat at the Ziggurat stage area to relax, on comes Mae Happyair. In the first few minutes of her set, not a tush was left sitting down. Showing no mercy with her hard-hitting set that echoed EBM, breaks, techno and a dash of psytrance, the Bangkok-based producer and founder of NON NON NON reinvigorated dozens, including a number of light whip dancers who illuminated the open-air dance floor with their hypnotising movements.

#Sorrynotsorry but here we go again with The Quarry. DJ Masda’s multiple-deck, full-vinyl set left most attendees astounded by his precise mixing and flawlessly flowing track selection. Intense, intimate and immensely galvanising, his three-hour performance was exactly what the bright-eyed and bushy-tailed midnight ravers needed. 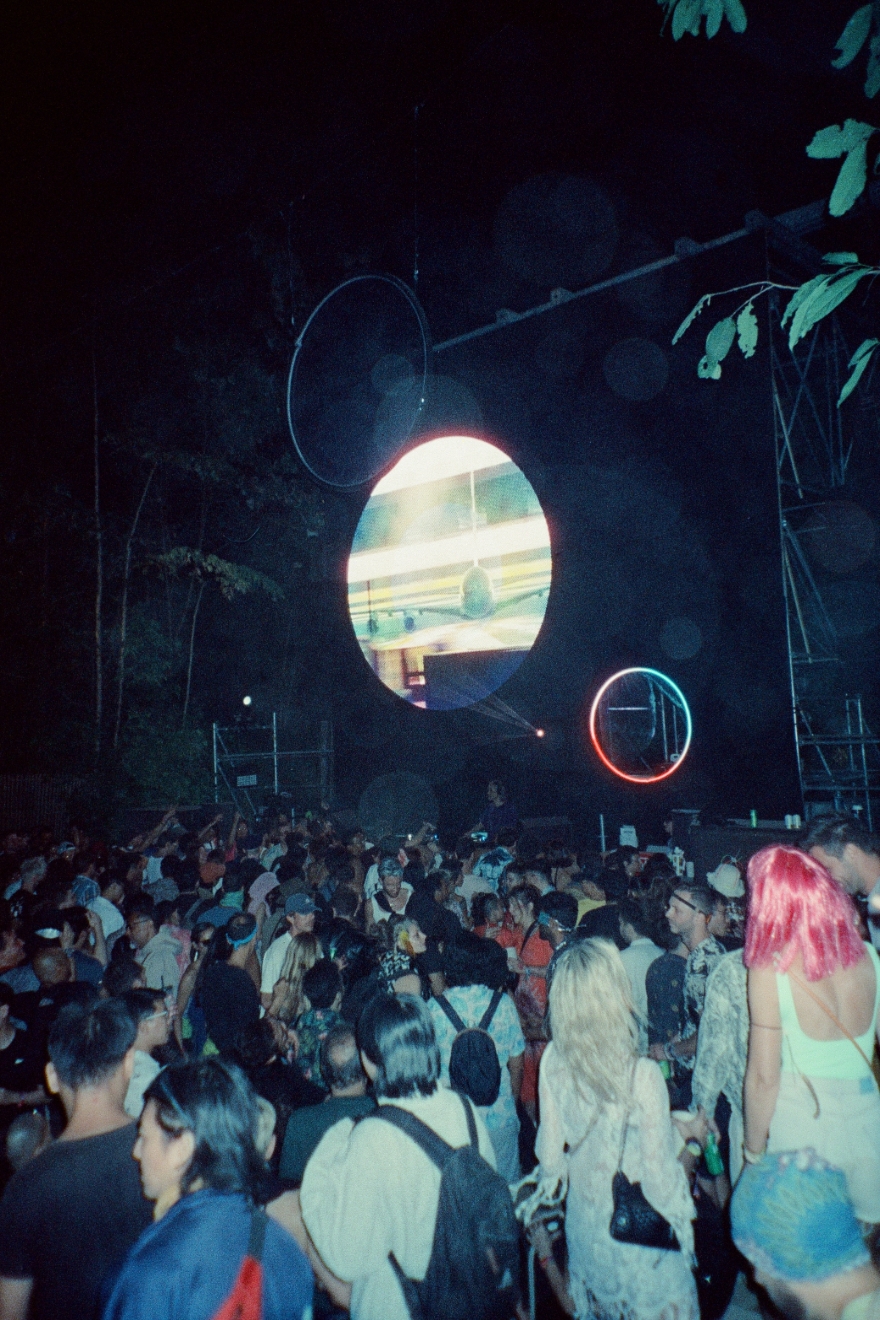 Picture this: you’re dancing in the presence of greatness as the sun slowly peeks out from behind the hills. An eclectic selection of house, soul, jazz, disco, broken beat and more resound from the speakers of Solar Village accompanied by the humble smiles of none other than Panorama Bar residents, Lakuti and Tama Sumo. Now that's how you start your Sunday.

Wandering around The Fields on whatever day it was, we come across a section almost isolated from the larger stages. As the rhythmic echoes fade out, calming sounds of nature start to emerge; bird calls, trickling waters, chirping crickets. We had come across Amnesia Mole — an installation that compiles sound recordings from Wonderfruit’s own venue.

Gathered from 2019 to 2022, the experience allowed attendees to immerse in an intermixing of organic, tranquilising sounds, almost to the extreme opposite of the sets that were still ringing in our ears a few moments earlier. Created by Thailand’s Arnont Nongyao and Vietnam’s Nguyen Ngoc Tu, Amnesia Mole allowed us to observe and absorb the symphonic sounds of Mother Nature that we often take for granted. 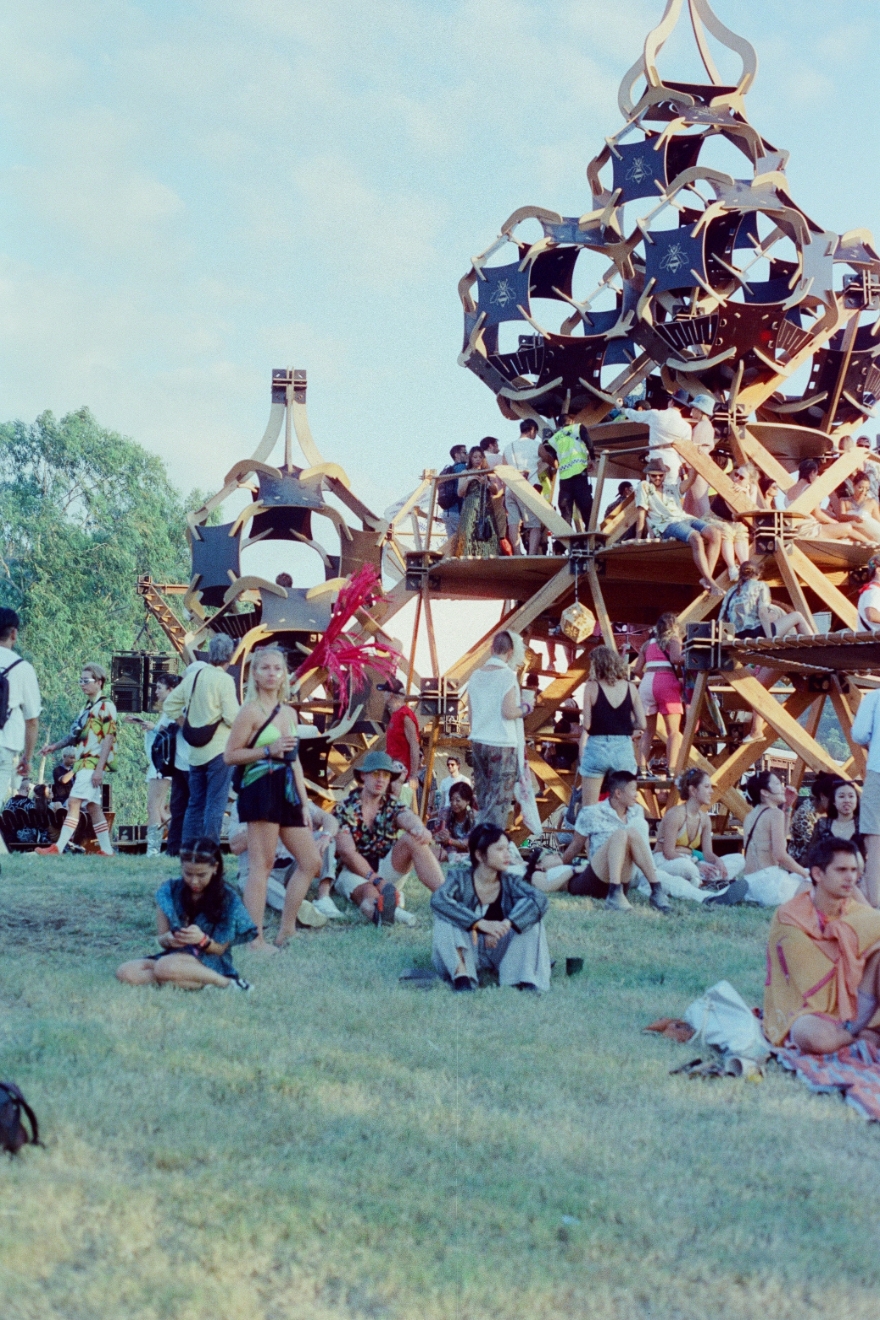 Browse through our gallery of analogue photos from Wonderfruit 2022 here.