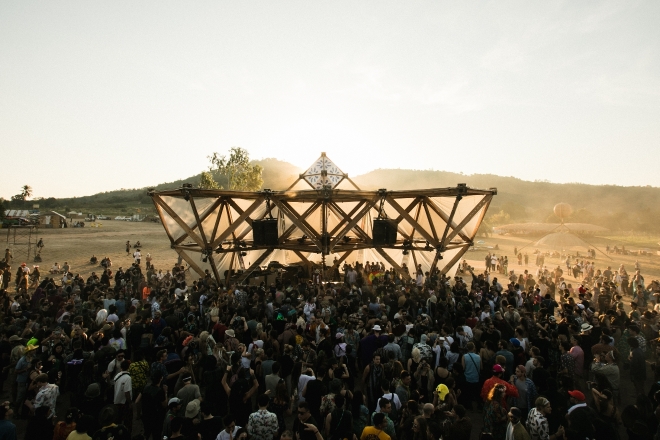 Deemed as one of the world’s biggest gatherings in showcasing the intersection of global culture, this year’s Wonderfruit continues to blur the boundaries between worlds with its specially curated programming, artistic wonderings and live performances. Don’t believe us? Take a gander at the first round of acts that it just announced on Instagram.

Wonderfruit eliminates the notion of exclusivity by omitting big headlining names — something most people would expect for a returning festival. This goes to show how organisers have undergone a meticulously deeper sense of curation towards presenting novel experiences for all who attend.

"Since the last time we gathered, it feels like we have left behind a different world. The pandemic gave us the opportunity to pause for a long moment, think back at where we had started, and look ahead more clearly to where we want to go. While life ahead is unknown, I am recognizing that to be vulnerable through this lens is to grow and engage with it. To focus on the things that matter. And it’s in these moments that life expands," festival founder, Pranithan Pete Phornprapha, illuminates.

Encompassing the realms of music, art, architecture and wellness, the festival comes alive on December 15-18, 2022. A heap of unique experiences awaits us at Siam Country Club including Ancient Forest, a new community-based art project named Wonder OK, ancient rituals in wellness with the Human Body as Axis Mundi, plus reimagined spaces for man and Mother Nature in Architecture that feeds.

Two specially curated projects have been prepared for this year to further ignite the senses. SUGi, the world’s leading network of Miyawaki Forest Makers, will design the Ancient Forest where us wonderers can engage in workshops and installations amidst a harmonious environment of nature, architecture and culture. There’s also Sonic Elements, where MSTCY Studio invites us to enhance our relationship with the natural world through its immersive installations resounding transcendent field recordings.

In this year’s instalment, the world-renowned Yayoi Kusama will present her ‘Flower Obsession (Sunflower)’ alongside local artists such as Boonserm Premthada and his natural-world-themed structures that are bound to bring an added sense of marvel to The Fields.

Read this next: Wonderfruit: If you’re only interested in big names, you’re not thinking big enough

And now for the music. Asia’s slew of talents definitely stands out in the first phase announcement, which includes Japan’s bastion of charming house music, Soichi Terada. Yumiko Morioka is set to perform her recently re-released 1987 album ‘Resonance’ and conduct a traditional green tea ceremony led by her daughter. Indonesia’s Batavia Collective are also on the list, so prepare to groove along to a presentation of their future-jazz wizardry. Thailand's very own breakbeat/techno pundit Chalo is also set to perform live as a part of the More Rice Records Showcase.

For more ambient tunings, the Creature Stage will present the sounds of Hatis Noit and Masayoshi Fujita as part of their Slow Down with Erased Tapes programme. Missing the iconic Molam Bus? Legendary Molam singer Angkanang Kunchai will be there to indulge us with an unforgettable aural experience for both Wonderfruit first-timers and loyalists.

The first line of international acts are just as exceptional. Tune in and zone out to the sonic soundings of Telefon Tel Aviv, Penguin Cafe, Anne Müller and her cello, Ben UFO, Dresden (Ivan Smagghe x Manfredas), Tom of England and DJ Garth who is credited with defining the sound of San Francisco house music.

Read this next: Soichi Terada & Masalo aim for the clubs with their re-imagined 'Driving Into Minds' EP

With ticket sales starting next week, make sure you read up on the new purchasing system if you want to secure yours.

Keep up to date with Wonderfruit announcements by following the festival on Instagram.