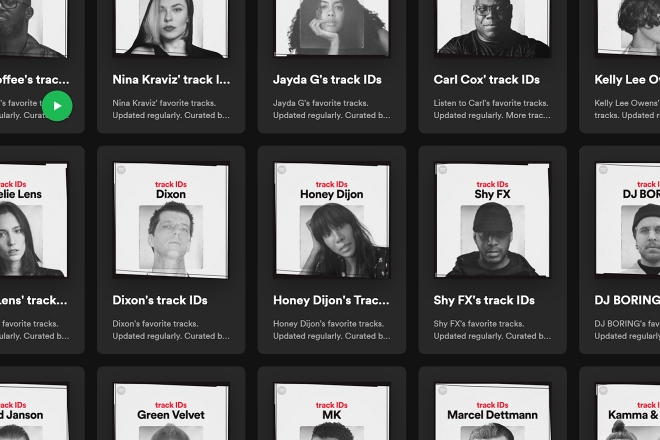 Spotify just announced the exciting release of ‘track ID’ last week, a new set of playlists curated collaboratively by DJs and Spotify’s editorial team. These playlists will also include the DJs’ original tracks, as well as tracks that DJs have played in their sets to “remove the guesswork for dance and electronic music fans”. Indeed, there have been too many moments wasted troubleshooting Wi-Fi while trying to Shazam a song during a DJ set than simply surrendering to the dancefloor and the sound waves. Luckily for us, these playlists will also be updated every week, so this will be a healthy long-term relationship.

What's even more exciting is that two Asian DJs have been featured alongside a small pool of some of the biggest names in dance music like Carl Cox, Nina Kraviz, Dixon and Green Velvet. First up: Sapporo-born-and-raised DJ Qrion was selected by Spotify as one of the 23 DJs. You may remember her from her blissed out melodic house and techno mix for Mixmag Asia Radio back in April. She was also listed as one of the best up-and-coming acts by Mixmag in 2018. Her most recent release is ‘Slow Down’, a collaboration with Motez that was released in late June by Californian deep house label This Never Happened. Her track ID playlist includes deep cuts by Four Tet, Bonobo, Mount Kimbie, KETTAMA, as well as cross-genre remixes of the iconic New Order, and indie folk singer-songwriter Lianne La Havas. You can listen to her ‘track ID’ playlist here.

Also selected to curate a track ID playlist is legendary Japanese DJ and producer Ken Ishii, one of the most important figures in the contemporary techno scene. The artful Ken Ishii is revered within the techno world for pushing the rhythmic and structural boundaries of the genre, as well as for pulling influences from more experimental music such as the chromatic compositions of the early-mid 20th century, and combining that with the sound of Detroit techno. His track ID playlist includes joints from Derrick May (reasonably), Justin James, Takuya Yamashita, Jani Ho and more. You can listen to the playlist here.

The ‘track ID’ series has a total of 23 DJs, including household favourites such as Aluna from AlunaGeorge, Amelie Lens, Black Coffee, Dixon, Jayda G, MK, Pan-Pot, Honey Dijon and more. The songs included in the track ID playlists will hit every corner of the messy genre-world: techno, house, electronica, downtempo, ambient and more. Dixon says, “It’s no secret the tracks I play are usually unreleased from whichever sounds I’m into at the time. Right now with the usual game on hold, this playlist feels quite personal. Of course there are the floor fillers in there, some from prior to lockdown, some that never have been tested on a dance floor. But I’m more curious to gauge the listeners’ response to the underdogs.”

You can check out track IDs from all 23 DJs here.