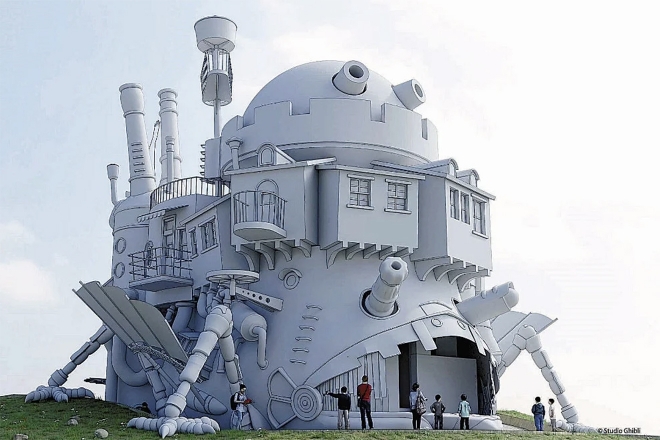 2021 perhaps hasn’t been off to the greatest start but the big difference between last year and this year is now we have hope. There is a light at the end of the tunnel and it looks like a (slow but steady) vaccine rollout that should hopefully allow for some form of travel to return. First stop? Japan, for the opening of Studio Ghibli’s long-awaited theme park in 2022. And today, we get a first look behind the curtain at a 16-metre high recreation of Howl’s moving castle, and a landscaped recreation or forest attraction of Princess Mononoke’s Irontown.

In a mock-up first shared by Japanese culture news source Otaku Calendar on Twitter, we are able to fully digest how true-to-life the scale of the titular castle is. Sadly it's not built to move as it does in the movie, but it certainly retains its size coming in at 16 meters. For context, that’s a third of the height of the castle at Disneyland Paris.

A picturesque settlement of Irontown from Princess Mononoke was also shared, which gives us a closer look at one of five uniquely themed zones at the park. Take a look at the images below:

Ghibli Park will be opened 2022 in Aichi Prefecture. Howl's Castle and Irontown of Princess Mononoke will be reporduced !! pic.twitter.com/twPxz61CvR

The park was originally planned to open last year but following some delays due to the coronavirus pandemic, Ghibli Park is slated to soft-open in 2022 in Aichi Prefecture, near Nagoya in Japan. The grand opening will come sometime in 2023. The theme park will feature many iconic settings from the movies as well as a theatre and exhibition spaces that offer a behind-the-scenes look into the iconic animation studio's artistry. The first is a large Ghibli Warehouse with an indoor facility, cinema and playground featuring elements from various Ghibli films including The Secret World of Arrietty and Castle in the Sky. The other four sections are the Valley of Witches, the Princess Mononoke village, the Dondoko Forest from My Neighbor Totoro and the Hill of Youth area which will house the motionless castle.

More good news is that Studio Ghibli founder and figurehead Hayao Miyazaki wasn’t happy in retirement and announced his return (“in order to live” he’s quoted as saying). Since he is set to continue making more movies, so the theme park will hopefully never run out of endlessly fantastical material. There's also Gorō Miyazaki, whose controversial new release Earwig and the Witch, which is now streaming, will also get an exhibit.