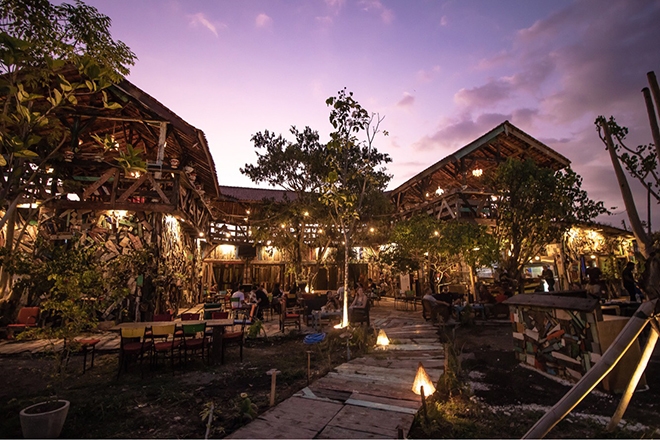 An inspiring new hospitality development in Bali recently caught our attention, especially when we found out it was named Neverland. Birthing themselves in the bustling and burgeoning area of Canggu, which has become the ultimate hub for nightlife on the island, Neverland is an all-encompassing entertainment destination that has a variety of outlets offering conceptual burgers, yoga shalas for the well-being-lifestyle-folk, contemporary Japanese dining and an underground club that runs throughout the day and night.

And to nobody’s surprise, the open-minded music club concept is what got us most excited — HAUS by Neverland is an unpretentious edition to the heavily hyped Canggu area, which has been developing rapidly over the last several years and extending the party-centric areas of Kuta and Seminyak further across the western coast of Bali.

The new property is built with decommissioned ships, contrastingly blended with organic, recycled and wood construction that gives off warmth and friendliness. A stunning array of unique cocktails and a high-grade Martin Audio sound system sets the perfect tone for after-dark socialising. The ultimate priority is, of course, the music, which is programmed and curated by their Music Director, Devin Wilhelm (Devlar), who brings a wealth of taste, knowledge, and passion to the booming music scene on the island. Devlar’s musical homes are with two Hong Kong-based record labels, Souta and Typhoon 8 Records, and when he’s not helming the decks and sound-tracking a lengthy sunset at the beach or taking sweaty dancers on a hedonistic journey, he’s one of those DJs you’ll find locked up in a studio losing his mind to his crowded collection of drum machines, synths and flashing LEDs. A strong partnership with Golden Gate Berlin and Golden Gate Club Records (GGCR) brings seventeen years of authentic underground clubbing experience to the venue.

This coming weekend, over Friday 20 and Saturday 21 December, HAUS officially opens its doors with a powerful line-up that will appeal to music heads and those with serious dance-floor rituals. With their roots stemming from Berlin, and their spirits embracing Bali, you can expect two nights of solid house, techno and underground dance music, starting with Devlar and special guest Jepe on Friday, while Ocean Lam and Rodaq set the tone for some beach-side techno on Saturday. The general direction he will be taking the venues crosses between the realms of house, techno, deep tech and deep house.

Joining Devlar on Friday, Jepe hails from Portugal and then relocated to Berlin where he launched his solo career after releasing under a previous duo-based moniker, Johnwaynes (with a fellow Portuguese musician) on labels such as Mulemusiq, Compost, Let’s Play House, Cécille Records and Get Physical. His solo direction which started in 2013 has landed him releases with Moodmusic, Engrave Ltd, JackOff, Frau Blau, and a new project called Battera with Takumi Motokawa.

Shifting towards a heavier sounding Saturday night, making her Bali debut is Ocean Lam — Music Director behind one of Hong Kong’s few underground clubs, Social Room. Also part of the Typhoon 8 Records family, Ocean frequently travels the region playing across South East Asia and China, and has a growing following in Europe, particularly in Germany, where she has been invited to play at Berlin’s famed Golden Gate, and Ipse, as well as Melt Festival.

Heavily sourcing from the Berlin scene, the final addition to the line-up is Rodaq, who left Berlin to embrace the rapid and bustling scene of Asia while based in Singapore. The Sweatbox Records artist is known for concocting unique blends of undulating techno and trippy tech-house to club and festival devotees across Europe and Asia.

The Official Launch of HAUS by Neverland couldn’t be more to the point of their concept and direction, supporting regional electronic music artists while importing the Berlin influence that they stand strongly by. Where the walls come from the past, hearts live in the present and inspiration from the future, HAUS is kicking off their journey with a mighty bang right in time as we shift into the second decade of the millennium. If you’re in Bali this weekend, we suggest you head over to Canggu for an early Christmas present and be a part of the Neverland journey, in a land far far away.