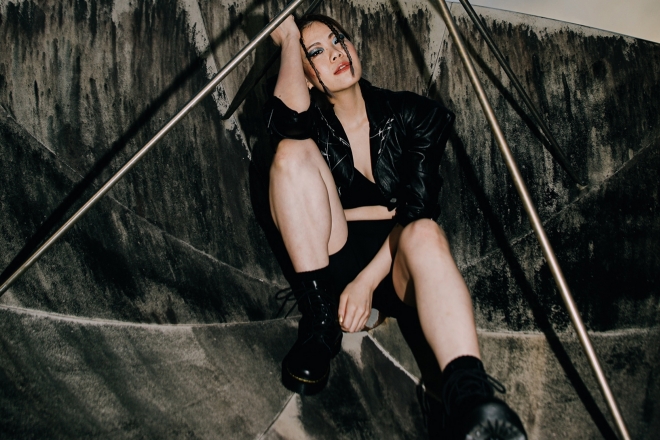 We write about Sonia Calico a lot. The Taipei-based artist makes it easy for us with her steady delivery of stellar content: from forward-thinking music releases to mind-bending music videos and, her latest trick, a groundbreaking two-day music and technology festival that took place in Taipei last month. Consistently one step ahead of trends, a trendsetter if you must, her latest output is a music video that solidifies her position as an artist that looks to the past to create her own hyper vision for the future.

The video is for a piece called ‘Neo Tokyo Folk’ off her 2021 album called Simulation of an Overloaded World and is a collaboration with Dustin Ngo from Ho Chi Minh-based music duo ANNAM. She found inspiration for the work after seeing a performance of Awa Odori (阿波踊り), a traditional Japanese dance that’s celebrated at the Obon festival, a dance festival that draws 1.3 million people each year, and felt compellingly drawn to the music.

“Taiko drums and shamisen — a traditional string instrument — were already my favourite instruments, but what really got me were the performers’ chants and shouts,” she said to Nowness Asia about the inspiration for the track. “They were so powerful and rhythmic, I later realised it’s called ‘Kakegoe’.”

When she connected with Ngo, whose live performance layers traditional instruments over dark electronic music, she immediately felt it was a syncopated match with the future vision she had for her own version of Awa Odori, which sees the dance mutated to fit a world that is fuelled by technology and globalisation (a common theme explored by Calico, especially in Simulation Overload which sonically explores a post-human universe).

Now, 3D visual artist Nhat Nguyen helped her bring the track to life visually with the release of an accompanying music video. The mesmerising three-minute spot stars choreographer Joan Nguyen as the protagonist who is “roped into an underworld and performs the Awa Odori while possessed”, which is complemented by a melody that Nguyen describes as the goddess character wanting to take you into her world. It’s set in a dystopian place where the real and the virtual worlds are merged, and where the human mind is controlled by a virtual superpower.

The video for ‘Neo Tokyo Folk’ is out now. Watch it in full below: