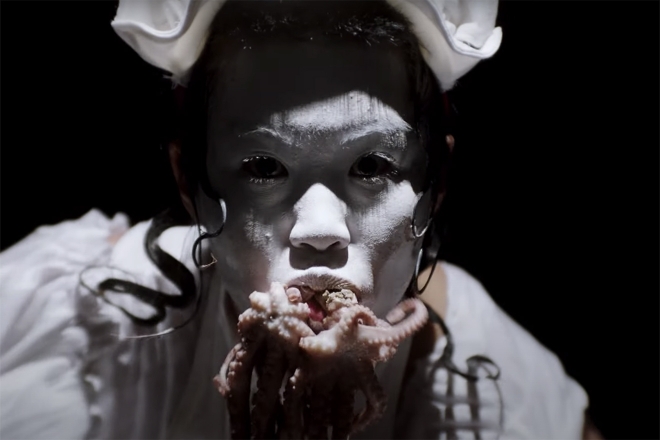 Last year, Taipei-based electronic artist Sonia Calico put out an ASMR-inspired club cut called ‘Mukbang Roler’ which was taken from her debut album ‘Simulation of an Overloaded World', which was written mostly during lockdown. Earlier this week, she released a video for the track that’s built around the audiovisual sensation of mukbang, an online broadcast in which a host will eat large quantities of food while interacting with their audience. The trend was popularized in South Korea and has merged with ASMR on certain channels, and Sonia tapped into its vivid, high-definition sounds for the track.

The video was created together with artists Curry Tian and Jasmine Lin, and is staged in the form of a virtual dinner party with an underlying theme of companionship, cultural connection, and queer identity-making amidst a global pandemic. The idea came to them after they wondered how and if the intimacies and textures of both food and live performance are translated in the digital realm? They also mulled the evolution of mukbang and how the pandemic had affected the way people experience eating.

“Mukbang (먹방) has taken on new significance within the context of COVID-19, where sharing food with our loved ones is no longer a viable love language,” reads an article on Nowness, where the video premiered. “Disembodied in space, where do we go to experience these relationships and appease our affective desires?”

On choosing mukbang as their medium, Curry says “even before the pandemic, people turned to mukbang for a sense of belonging. It was a way to heal their self-awareness and loneliness.

“What intrigues me about mukbang, and the idea of people streaming a mukbang video whilst they eat alone, is that it’s a way of engaging with the internet where you’re still aware of your own body,” she says to Nowness. “When you binge a TV series, or when you play a game online, you tend to forget you have a body. But when you’re eating, it keeps you grounded in your own body. So when we talk about these experiences like eating and raving and how it’s been transpired in the digital sphere during the pandemic, my question is: how do we bring that intimacy and richness of these acts into the digital space?

In the video, three performance artists — Jaclyn Chu, Jenny Kwak, and Jasmine Lin (and their NUSI QUERO-rendered avatars) — seek to “satiate their ravenous appetites, ripe with hunger and desire for intimacy and cultural connection amidst a global pandemic.” Throughout the commensality, the directors meld together textures from the live performance and the virtual simulation in a way that’s meant to inspire diasporic neitzens to think about their own bodies through the sensory act of eating.

The making of the video was a very collaborative process, explains Nowness. The performers all conceptualized their own raw, unpasteurised food performance grounded by these questions: What stories of migration/assimilation/tradition/grief does food carry? How can food be a time-travelling device or a full-bodied experience? How can the intimacies and textures of both food and live performance be translated into the digital realm?