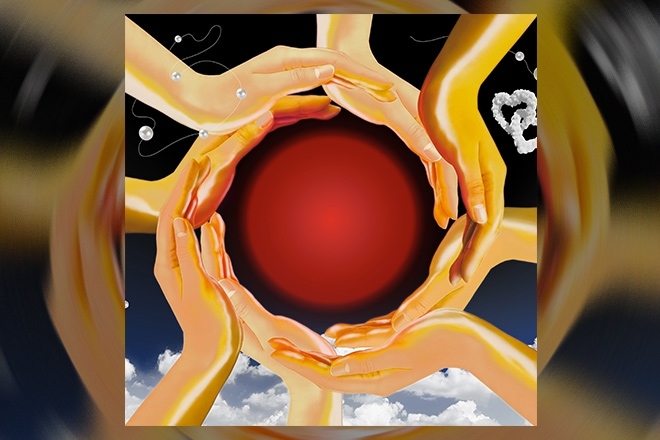 Nhạc Gãy is a Saigon-based party collective with a rave spirit and a playful mindset, and they’re starting the Year of the Ox with a bang — they’re releasing their first club compilation featuring local and diasporic Vietnamese artists. From techno, gabber, vina house, IDM, industrial, to hip hop and breakbeat, the compilation will reflect the collective’s rave spirit as well as celebrate the Vietnamese heritage and identity. In the album, traditional Vietnamese instruments and elements are paired with contemporary dance genres like UK drill. 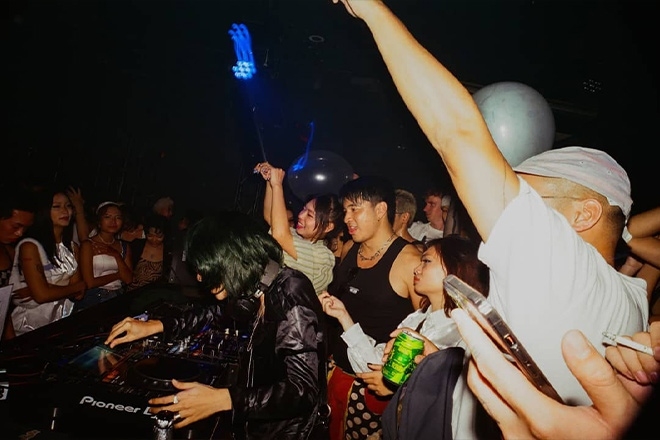 We reached out to Anh Phi and Abi Wasabi of Nhạc Gãy to learn more about the process of curating the compilation, the growth of the rave community in Vietnam as well as the unspoken taboo of mental health in Asia.

Mixmag Asia: What was the A&R/curation process of this compilation?

After our first couple of raves, I realized that we were playing mostly music from overseas. Most of the local sounds we were playing were vina house (a mainstream funny cheesy club genre) or old traditional songs. With this first compilation, we wanted to push Vietnamese artists — both locals and from the diaspora — to reflect more on what could be modern Vietnamese club music. With the diverse range of genres that could be heard at our raves, we wanted the compilation to be quite eclectic with a club feel. We asked producers to cross genres, to experiment, to add a Vietnamese touch to their sound. Some would have Vinahouse elements (like Larria and Nodey), some would sing/talk/rap in Vietnamese (Tiny Giant, Mess, Attiss Ngo, Puppy Ri0t…) or some would sample old traditional instruments or voices found on the internet.

In terms of A&R, it was pretty organic as well. Most of the artists in this compilation are friends or friends of friends, some already played at our raves while some others we’ve just connected via the internet. In fact, Gãy seemed to become little by little a bridge with the young Vietnamese diaspora all around the world. More and more, people from the West born from Vietnamese parents reached out to us on social media, either to greet us or just to present themselves as artists, music producers, etc. That’s how we digitally connected with Kim Dürbeck, a Norwegian Vietnamese music producer and DJ we knew via his Vietnamese memes Instagram account. In a current era of representation and identity crisis, it felt like it became increasingly important for younger generations to connect deeper with their roots, so music and arts are strong mediums for that.

Nammy Wams, an English-Vietnamese producer based in the UK said about his track that it “reminds [him] of the music [his] grandma used to play in the house when [he] was a kid”, but he added his own UK drill/grime style to it. Another example with a local artist now, Hanoi-based and young multidisciplinary artist Tran Uy Duc made a deconstructed club experimental track that had only some English vocals in it. But I wanted to push him to experiment with his native language. Unlike English, Vietnamese is a tonal language with six distinctive tones, so musically it is harder to work with and make it sound right. He was too shy to sing in his mother language then he looked at the title he gave to his track then finally threw a kind of rap in Vietnamese that comes from another planet.

Overall the process feels like we opened some doors for some music producers or gave a space to others to express themselves and connect with Vietnam and its people wherever they are in the world. This compilation is an ode to our heritage while blending it with contemporary weird sounds the new generation is eager to explore. It is a quirky cultural sonic piece in between different eras and places reflecting how open and multicultural Vietnam is. 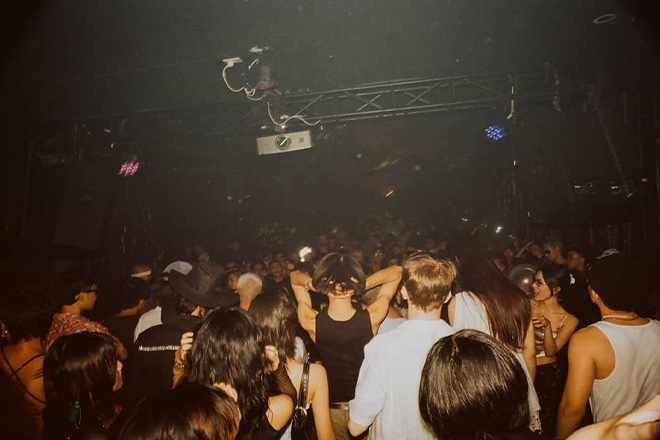 How is rave culture tied to mental health?

From a popular point of view, clubbing would just be simply associated with being wasted. In Vietnam, most clubs are table-service with women in short skirts serving you drinks along with top 40 hits and EDM tracks. However rave culture in its early age was mostly associated with PLUR (Peace, Love, Unity, Respect) and that’s what we’re more aligned with.

It would sound quite common in the West with decades of rave culture but in Vietnam, it is quite rare to have such spaces so we’re just building our own, both offline and online to support and push for under-represented identities, unheard sounds, and what is usually unaccepted or ignored by popular and mass organisms. Mental health issues would sometimes have their sources with being targeted as someone different, being rejected by our own family or our peers.

Rave culture is somehow a cure to that yet we’re aware it is not enough, hence our mental health podcast to break conversation about those topics, just openly talking about it is always a good small meaningful step. We’re still working on developing different ways to approach such a sensitive topic.

Was the collective always devoted to raising mental health awareness?

Some of our friends would have these mental problems, or at some point we once had. It's been in our lives for a long time and we all know that feeling of helplessness when we can't help a friend. Then when we started to earn some profit money from the raves we decided to spend it on such programs as small efforts we are trying to contribute. But we're not experts at it therefore we collaborate with other organizations to bring these topics closer to everyone and through the process of doing that, we learned a lot about ourselves as well.

What's the biggest lesson you've learnt since the pandemic?

Before the pandemic happened, we began to invite artists from oversea. We invited Taiwanese producer and DJ Sonia Calico to our night just before our borders closed. Our wishes of inviting oversea artists we admired quickly stopped so afterwards, we learnt to focus more on ourselves and on developing our local artists which turned out to be a really good thing. We discovered and developed talents by inviting them to jam with us at our homes, paying them some classes in a club, and giving them a spot at our raves to play. The pandemic pushed us to dig deeper into our own scene and focus on building growing it instead of venturing out which was a great discovery. 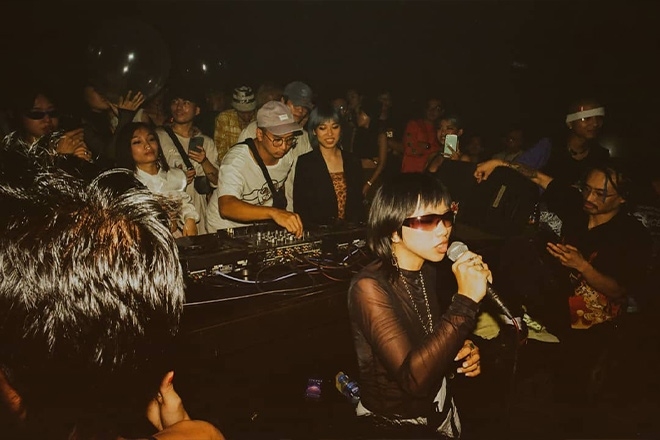 How has the community grown since the collective was founded?

It grew pretty much organically and with word-of-mouth from day one. The first one was just a birthday party we threw in a small club (Baroness) for our friends. The second one, some friends had overseas artist friends visiting the city so we just invited them to play. After a three month lockdown last year, we moved to a bigger capacity club (Arcan) as the space began to be too small for our audience that kept growing.

For our comeback last June, we invited a trash punk band Cút Lộn from Hanoi who played dressed as a high school girl in a Pikachu costume. It was an insane night where you would see people mosh pit, crowd surf, headbang, scream...Our resident and guest DJs dug deeper into those intense and playful sounds, jumping from genres to genres and keeping surprising the audience throughout the night: techno, gabber, hard trance, hip-hop, drum 'n' bass, experimental...During the live show, someone from the audience dressed as a vampire jumped on stage by surprise and threw a real mutton head over the crowd.

It felt quite surreal and reminded me of how raves are modern-day rituals. Starting from that night, our identity and energy became more obvious and strong toward our audience so that allowed us to continue to throw packed raves every time after that.

To keep growing, constantly changing and remain a playground for self-expression for us as well as the artists we collaborate with and our audiences.

To keep having fun, to surprise ourselves, to try new things, to learn altogether, to dig out hidden talents, to share more love. And personally, to tour with my best friends while sharing our music with the world in physical places. Seeing more and more Vietnamese artists creating new unique sounds is one of my dreams, but we still have a lot to work on. 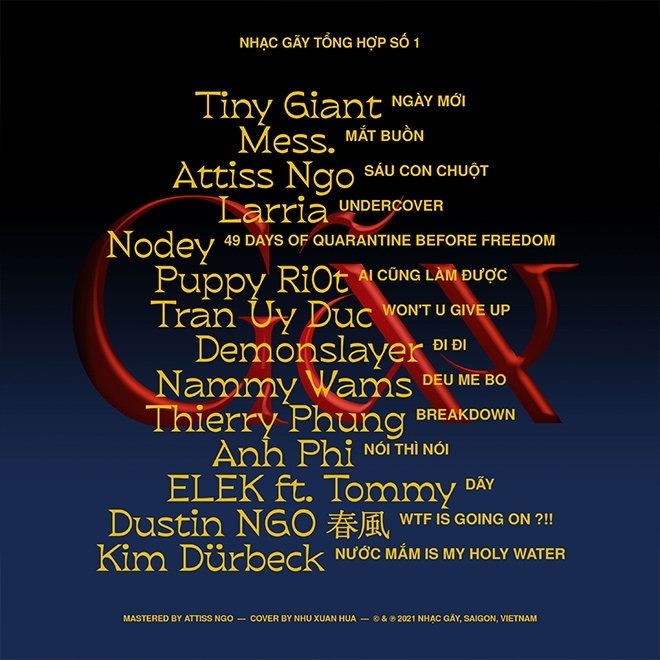