Believing that the boundary between virtuality and reality has disappeared — a phenomenon accelerated by the pandemic and the evolution of the metaverse — SYNERGY FESTIVAL debuts this weekend in Taipei with the aim of carving out its own corner of a fast-evolving world and shaping the future with music, art and technology...at least in Taiwan.

Unfolding across March 19 and 20 at the Songshan Cultural and Creative Park, a former tobacco factory, the two-day event looks to bring something never before done in Taiwan to an audience hugely invested in the intersection of music with culture and technology. Even before getting into its ethos, a strictly electronic music festival in the centre of Taipei City with a warehouse experience for urbanites has long been missing from the city's music scene and culture. It's a first, to be sure.

"We found that there are many overlaps and similarities between people who love electronic music and singer-songwriters in Taiwan," said the organizers. "They are a group of people who have unique tastes and can appreciate alternative cultures; they are curious about new things and accepts diversity, very open-minded."

"We provide a field where new energy occurs, bring the musician and audience from both sides together, to create SYNERGY EFFECT, 1+1>2, together to create a new scene that's bigger and stronger."

Planning to go? You should. Here's what not to miss.

​1. Explore a new wave of electronic music in Taiwan

Inspired by a new wave of creativity by electronic musicians in Taiwan, SYNERGY FESTIVAL believes this stems from Taiwan’s high acceptance of foreign cultures and its ability to internalize and integrate with local cultures so as to create a new musical configuration. As such, their mission is to break through and characterize the electronic music scene of the moment. They’ll do this across three stages: red, blue and grey. The red stage and grey stages are a natural habitat for party animals and will feature non-stop electronic music from house to techno, bass and dubstep by some of the local heroes in Taiwan’s music scene, with the latter being fully immersed in art. The blue stage, well, read on...

​2. Experience the power of collaborations via SYNERGY TRIANGLES with Jägermeister

SYNERGY FESTIVAL aims to gather artists from different fields to communicate and collaborate with each other to produce new works and new performance models. They’re doing this via a concept called SYNERGY TRIANGLES, which challenges artists to venture out of their comfort zones and reinterpret their works with electronic music. In collaboration with Jägermeister, who have long been major allies of independent musicians and artists, the blue stage has been fit-out with a Funktion-One sound system and a nine-meter-wide LED wall as the backdrop and is where SYNERGY FESTIVAL will look to present an entirely immersive audio-visual live experience for the audience. Expect to see artists like YELLOW (黃宣), CHUNYAN (春艷), Gobo (狗柏) from Amazing Show, SOWUT, Mong Tong, and more, including a SYNERGY TRIANGLE highlight made up of Abao阿爆（阿仍仍), Sonia Calico and veeeky who are teaming up for a performance that will surely redefine how we perceive "girl groups”.

​3. Take in some of the art experiences…from home

The curatorial concept “You invent the story of how your destinies were made” connects the themes of SYNERGY FESTIVAL's virtual gallery and physical exhibition. The virtual gallery was launched last month and invited artists to construct digital spaces to display the work of other artists. Exploring the virtual galley is quite different from the ordinary website browsing experience.

4. Deep dive into an IRL exhibition that travels through reality & virtuality

The curation of the IRL installations encouraged artists to interpret how our online and digital activities affect people’s feelings in real life, and how we are seduced by images when browsing on digital devices. However, during the ideation phase, it was observed that everything that exists in the virtual world cannot be engaged without physical actions. Thus, many of the installations explore the space where virtual and reality are intertwined and influenced by each other, with the hope of finding equilibrium through exploring and experiencing these artists’ creations. They include an exhibit that imagines the age of artificial intelligence, another that unravels the act of observing, and lastly an installation that proposes people may still reclaim control of their own attention, because our attention has a greater influence on what products are being produced and what ideas are propagated, amongst others.

5. Immerse yourself in a world of audiovisual experiences

Due to the development of new media art, A/V has gradually become one of the most prevalent methods in the electronic music scene. Operating under the belief that VJs can sometimes be seen as auxiliary elements to a live DJ performance, SYNERGY FESTIVAL aims to weigh music and visuals equally. The A/V experience will take centre stage thanks to a nine-meter-long LED screen where VJs who are either phenoms or veterans in the visual/media arts sector will flex their prowess. Lighting, lasers and projection effects will also be amplified and look to transform the warehouse space into one where the visual content uses the texture and frequency rhythm of the music itself to compile codes or programs corresponding to the visual parameters.

An immersive game experience will run in tandem with SYNERGY FESTIVAL that can be entered via LINE. Upon completion, gamers will be rewarded with tokens to redeem various prizes. Here’s how it works:

1. Participants will need to explore both the physical festival site and digital spaces in order to clear the missions

2. Enter the code found at these spaces to the bot (The Rabbit) on the Discord channel, collect the token and get rewards like drinks, merchandise and more

2. Enter the code found at these spaces to the bot (The Rabbit) on SYNERGY’s Game channel on LINE, collect the token and get rewards like drinks, merchandise and more

​7. Play at the Hunter Cabin with Jägermeister

In continuation of the Follow The Rabbit experience, the Hunter Cabin by Jägermeister — which will reimagine the brand’s iconic deer with thanks to 3D artist XTRUX — will be part of the missions that participants have to clear to become “hunter master”. The space is a collaboration with 3D artists and will house four objects that are linked with local nightclubs and music labels. Visitors to the Hunter Cabin can click on the objects to explore playlists curated by these nightclubs and labels.

8. Take part in an NFT online to offline link

Called the NFT Foundation, the platform is there for music/media art fans to directly support the future SYNERGY FESTIVAL. The owner of such NFTs will be granted unlimited free access to every future edition of SYNERGY FESTIVAL as well as events like workshops, satellite gigs, and so on. Being that digital art and music are struggling when it comes to being valued or traded in any art market, SYNERGY FESTIVAL believes that the concept of decentralisation can support artists who make unseen/untouchable pieces of art (music or digital) that can be traded and collected in the market, and gain income from it.

Taiwan has long been lauded as one of the more inclusive nations in Asia, and SYNERGY FESTIVAL looks to really push that agent by promoting gender equality across their line-up and their event, alongside mutual respect while embracing cultural diversity. “The mission is to create a safe environment where attendees can enjoy art and music while feeling comfortable and protected,” said the organizers. “While attending, please let go of any preconceptions and treat others with genuine love and respect.”

With a whole digital world to unpack and a rich program of off-kilter music to experience, SYNERGY FESTIVAL looks to tickle your conscious and leave you rethinking everything you know about music, DJs and staying connected. We took this ethos and applied it to an afterparty: welcome to the future, where music isn’t just to dance to, but also looks to challenge and engage. While they might be usual suspects in Taipei, we’re giving DJs Lemonfacer and GAZER a fresh platform to play together and explore that inimitable space created by a b2b — a tabula rasa for the maestros of the night. Forget what you think you know; come with an open mind, leave with an idea. 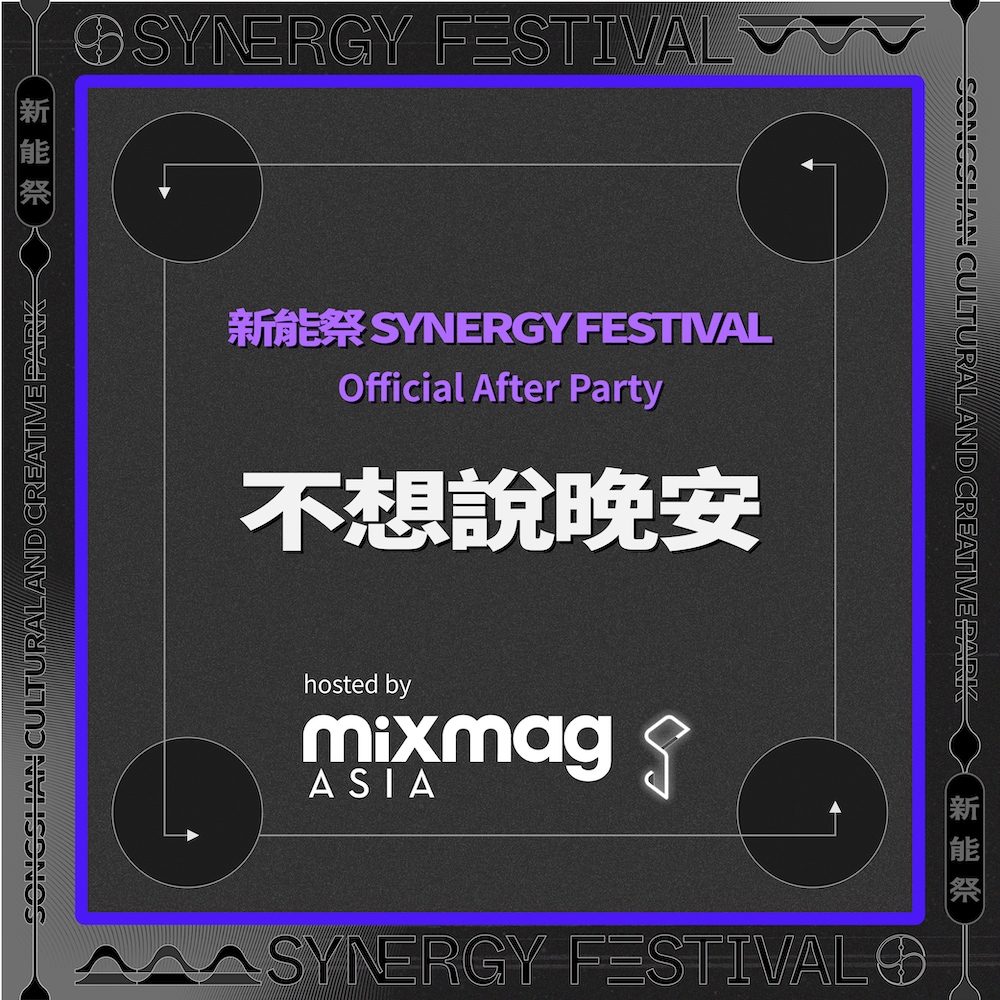 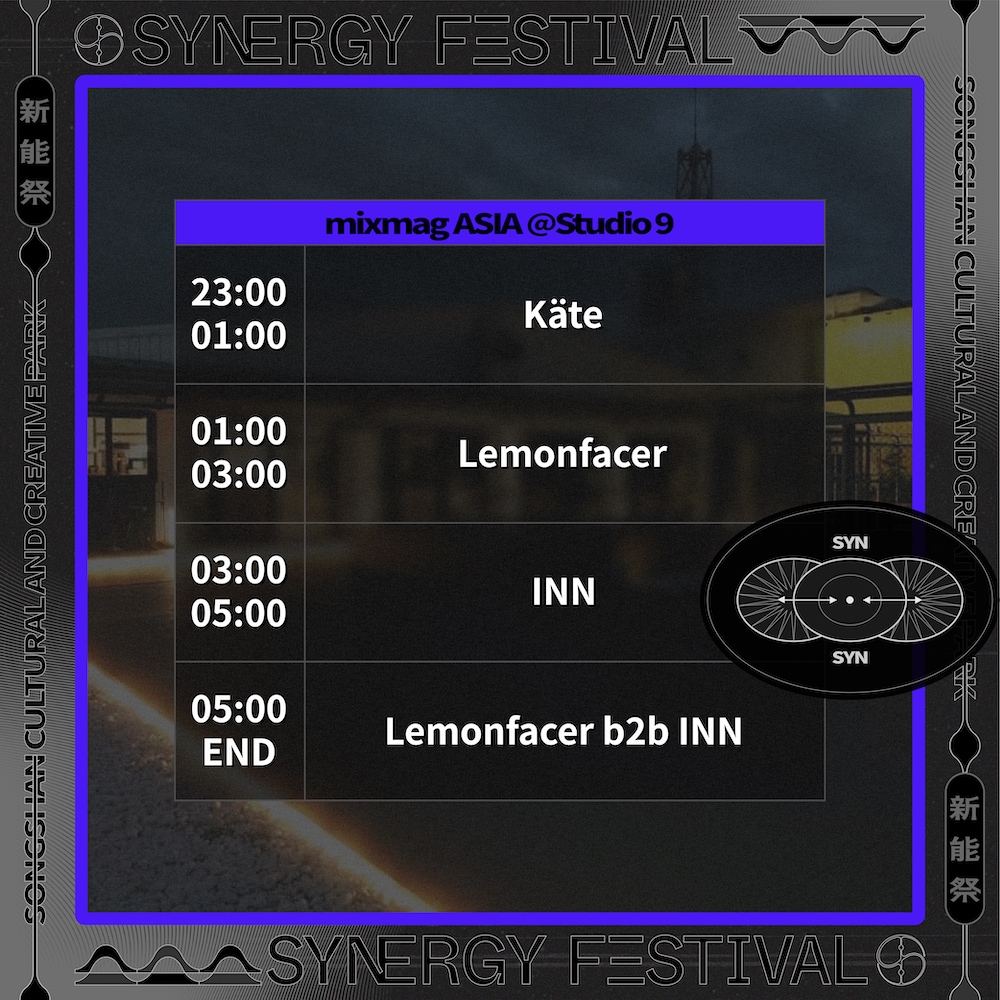