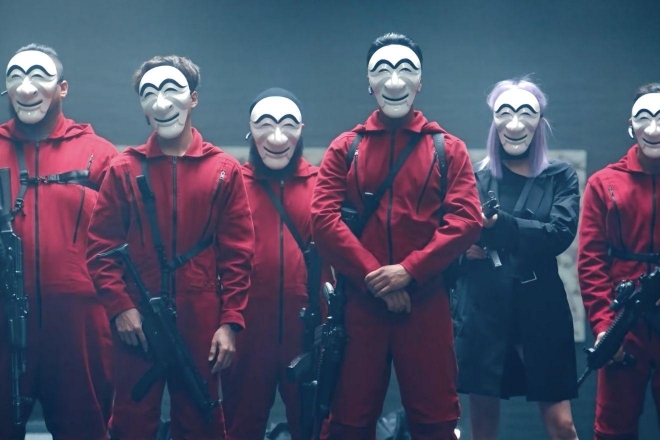 Seems like just yesterday the world bid “bella ciao” to Money Heist and its 5 grappling seasons that made us fall in love with their Spanish fictional characters and masterminds. However, this summer Netflix gifts us with a spin-off we didn’t know we needed — from both regions of Korea.

‘Money Heist: Korea – Joint Economic Area’ has been announced with a trailer that reveals the premiere is coming to our screens on June 24. The 12-episode series is set in a utopian reunification of North and South Korea as both nations prepare to print a unified currency. As with the original Money Heist, aka ‘La Casa de Papel’, the Professor rounds up a gang of outlaws from both districts in a grand larceny attempt of the Korean mint.

According to the Netflix website about the series, “Thieves overtake the mint of a unified Korea. With hostages trapped inside, the police must stop them — as well as the shadowy mastermind behind it all.”

Read this next: Netflix’s ‘Love, Death + Robots’ Season 3 returns & invites us on a digital scavenger hunt

From the trailer, fans can expect the infamous red jumpsuits and masks that have flurried costume stores and Halloween parties for the past few years. Taking an alternative route to the Salvador Dali masks, actors will be sporting Korean Hahoe-inspired ones instead. According to soompi.com, Jang Yoon-ju, who will be playing Nairobi, mentions that the “Hahoe masks capture a wide variety of facial expressions. Although they’re obviously smiling, they’re not just smiling. Within that, there’s also anger and mystery.” Squid Game star Park Hae Soo continued, “There’s also the meaning of freedom or the criticism of the classes of power.”

Read this next: Late-night revelry returns to a dark forest near Seoul at The Air House Festival