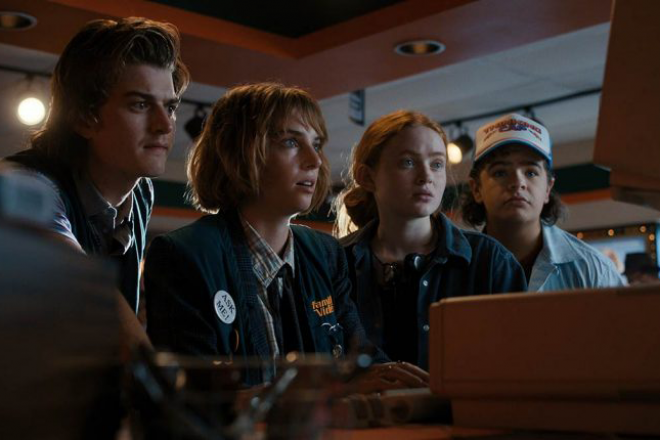 Stranger Things season 4 volume 1 was released on Friday, May 27 — and fans may have noticed a slew of recognisable 80s bangers on its soundtrack.

As expected, this season has continued to show audiences some of the most famously known timeless 80s music, as well as revealing an occasional hidden gem from the era.

The soundtrack matches the emotionally-charged storyline which follows the cliffhanger from season 3; Hopper is imprisoned in the snowy wasteland of Kamchatka, Russia, and back in the US - the teens are faced with new horrors.

The friends are separated for the first time, and they're navigating the trials of high-school life. Supernatural threats continue to creep into their world, and these teens are left to battle them.

The release of the new season has even pushed Kate Bush's 'Running Up That Hill' to hit number one on iTunes — as this track featured in pivotal and toe-curling scenes throughout this Stranger Things season.

Read this next: Meet the music producers of Stranger Things' electronic side project

Previous seasons' soundtracks saw the likes of 'Africa' by Toto, 'Should I Stay or Should I Go' by The Clash, and 'Fields of Coral' by Vangelis.

So without further ado, here is the soundtrack from Stranger Things season 4 volume 1 - by episode:

Starpoint 'Object of My Desire'

The Cramps 'I was a Teenage Warewolf'

Extreme 'Play With Me'

The Lloyd Langton Group 'Got Your Number'

Dead or Alive 'You Spin Me Round (Like A Record)'

The Interior Castle 'Diamonds and Emeralds'

Dorian Zero 'In Transit to Bermuda'

The Red Army Choir 'March of the Defenders of Moscow'

Read this next: Kyle Dixon & Michael Stein talk us through the Stranger Things 3 Soundtrack

The season is not over yet. The final two episodes are yet to drop, and they're expected to be out on Netflix on July 1.

It has been confirmed by producers that the penultimate episode is set to be 85 minutes long, while the finale of the season will be two-and-a-half hours long.

While fans eagerly speculate the outcome of the season, and what will feature on the soundtrack of the final episodes, you can listen to the Stranger Things official playlist on Spotify which contains songs from seasons 1 through 4.