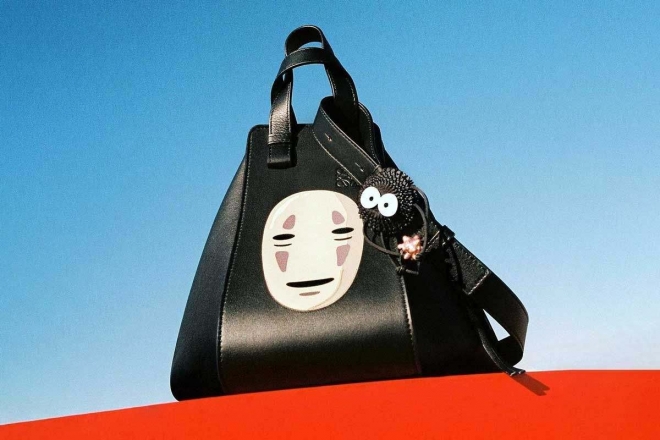 Luxury fashion brand LOEWE has released a second collaboration with Studio Ghibli, this time inspired by the epic 2001 Oscar-winning masterpiece Spirited Away by Hayao Miyazaki. The story follows 10-year-old Chihiro Ogino, who becomes trapped in a bathhouse for spirits and must rescue her parents from a curse inflicted by a sorceress and bathhouse owner Yubaba.

The film's dreamlike atmosphere has now been stamped across a capsule collection by Spanish fashion house LOEWE. It showcases the cast of the stone cold classic across a variety of whimsical and accessible wearables like graphic tees, hoodies, oversized cardigans, jumpers, culottes, denim pants and puffers.

Accessories are also abundant and are laden with characters like Chihiro and Haku, who appear on a range of bags, scarves and even blankets. Perhaps the most coveted piece of them all is a black leather handbag upon which No-Face appears floating starkly. Adorable soot sprites have also been fastened onto cardigans, handbags (including a bag that looks like a soot sprite), purse straps and even a bucket hat.

LOEWE-style craftsmanship elevates the look of the collection through jacquard, print, appliquè, leather marquetry and embroidery across the pieces. However, the brand also introduces a Japanese technique known as boro, which mends and indigo-dyes fabric scraps that are patchworked together.

Playing with the eeriness of shadows, the accompanying images were shot by renowned photographer Juergen Teller and feature artist Dua Saleh. 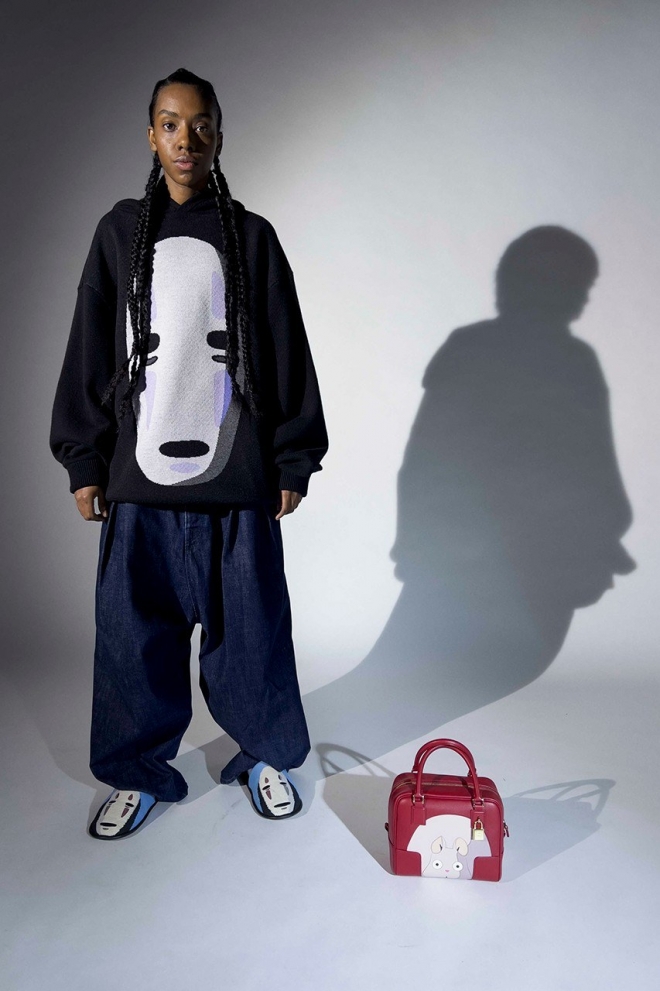 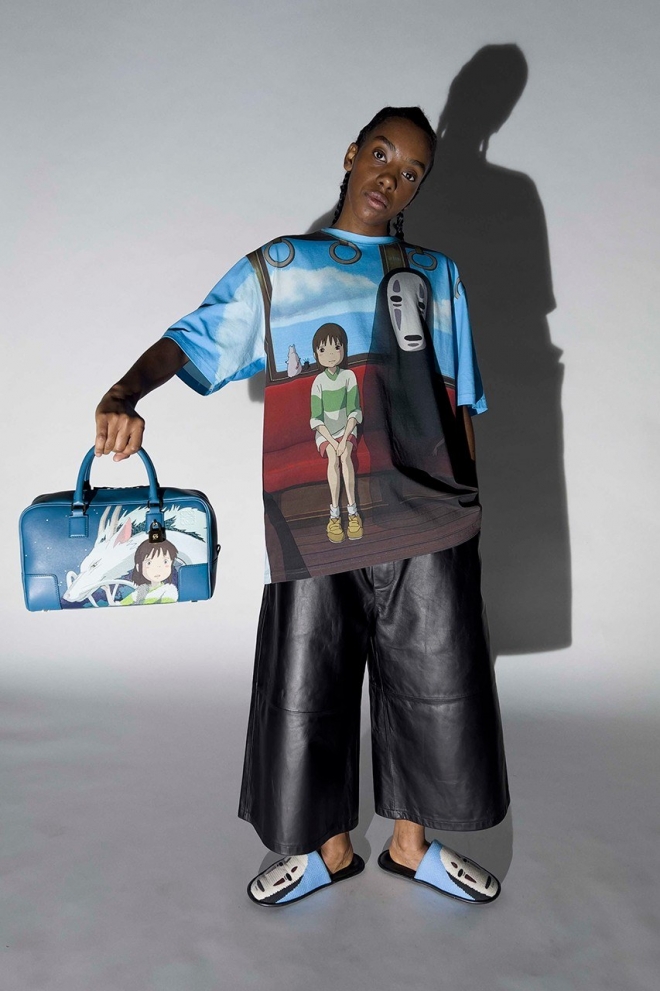 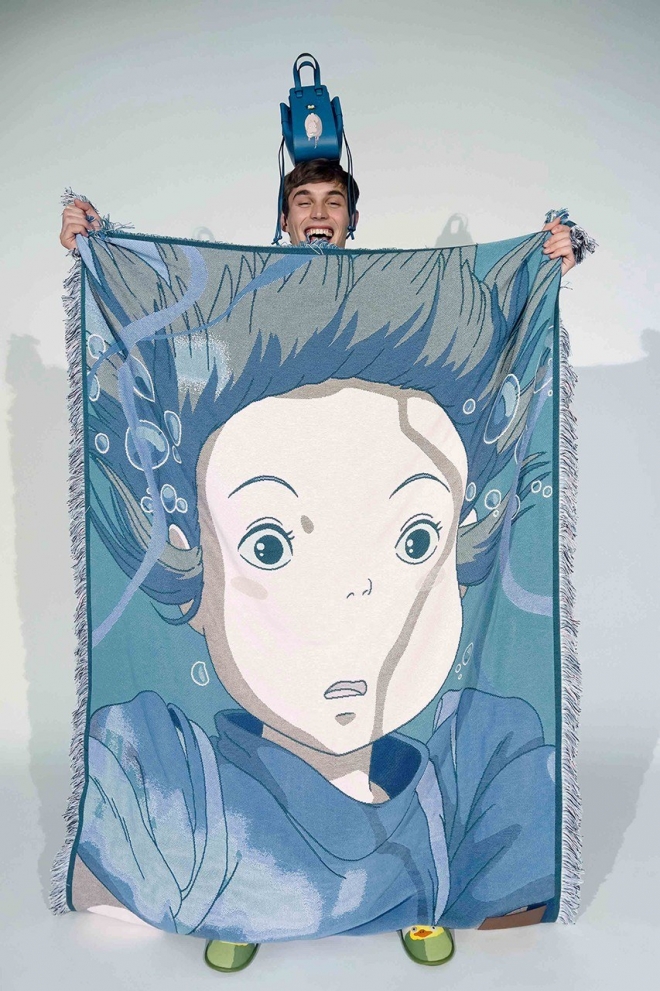 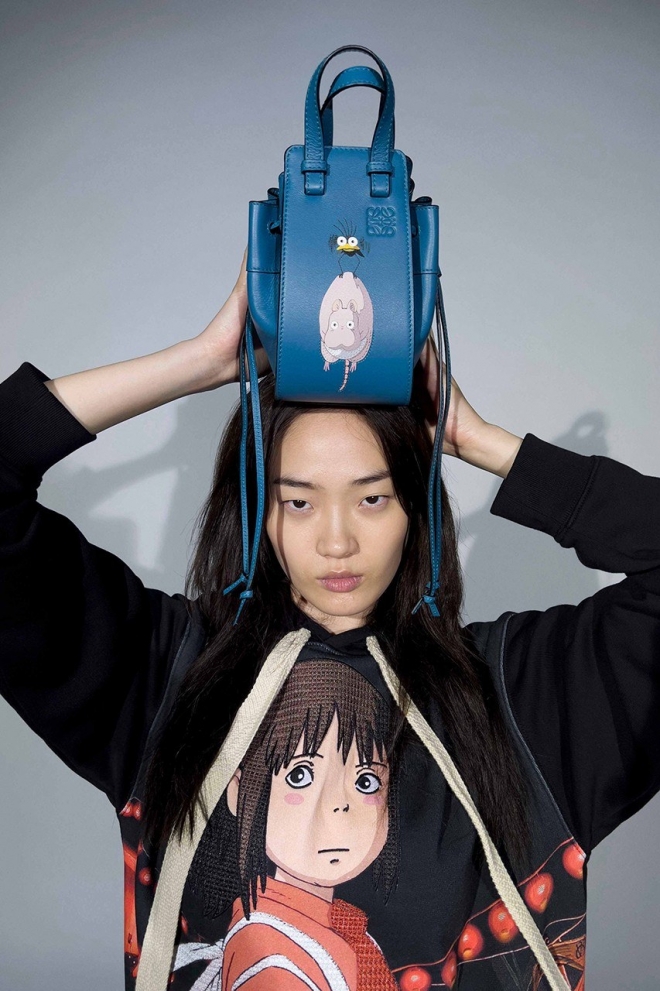 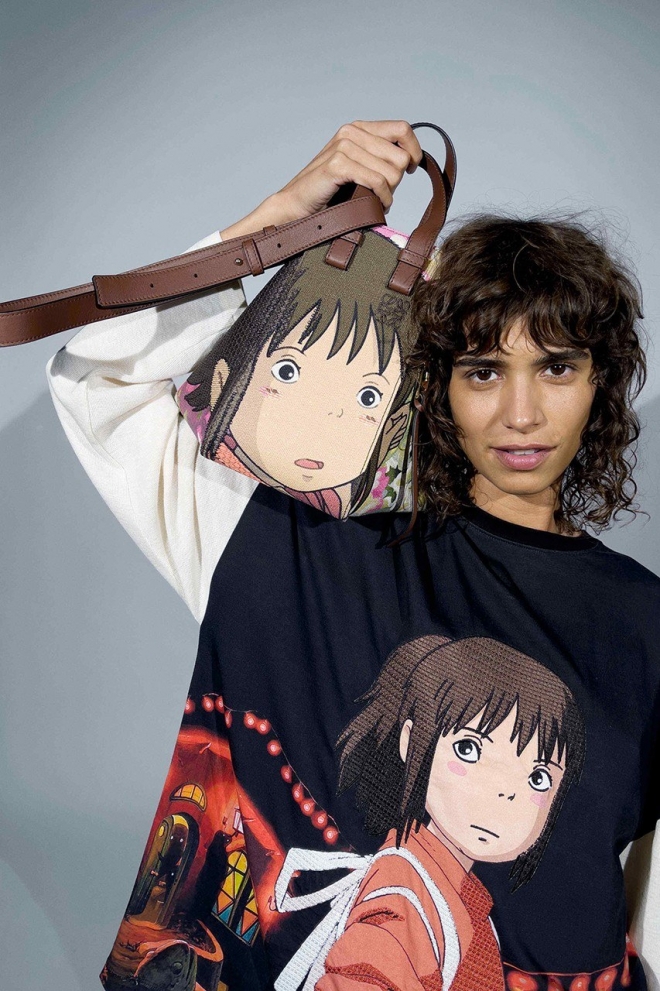 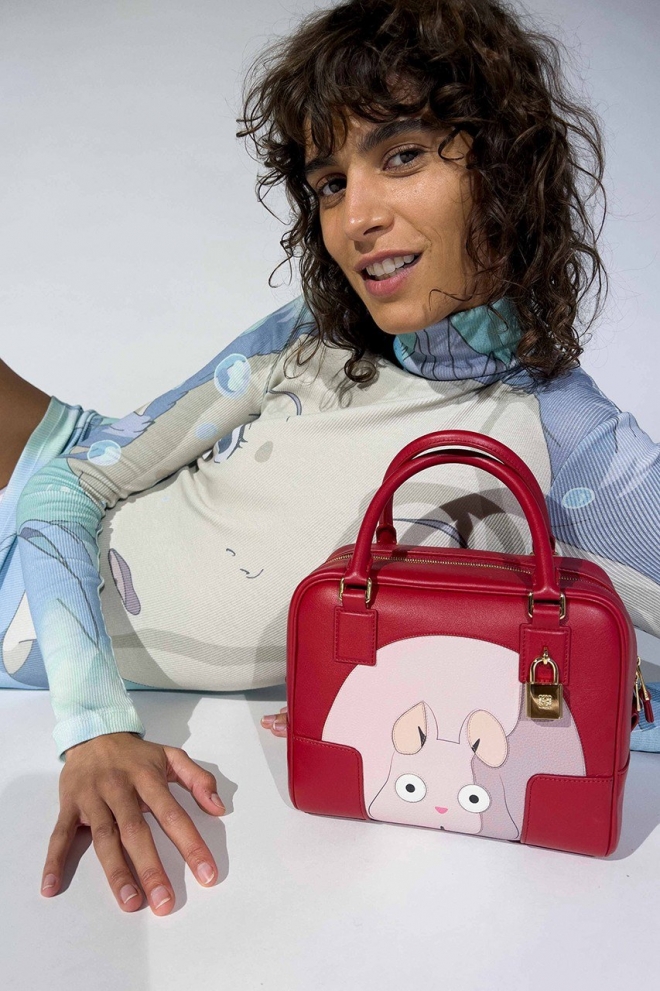 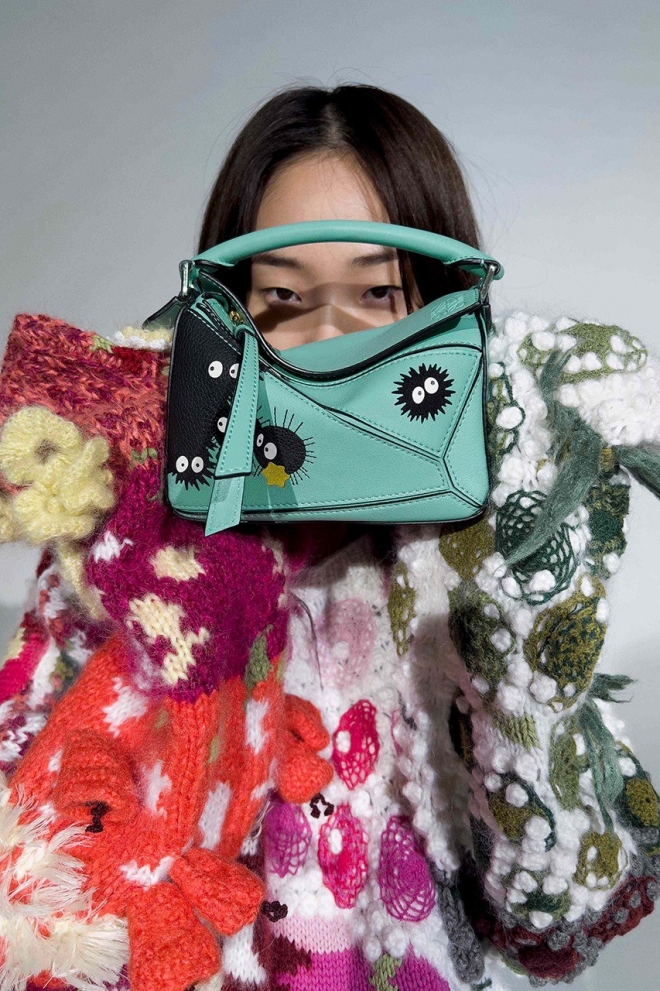 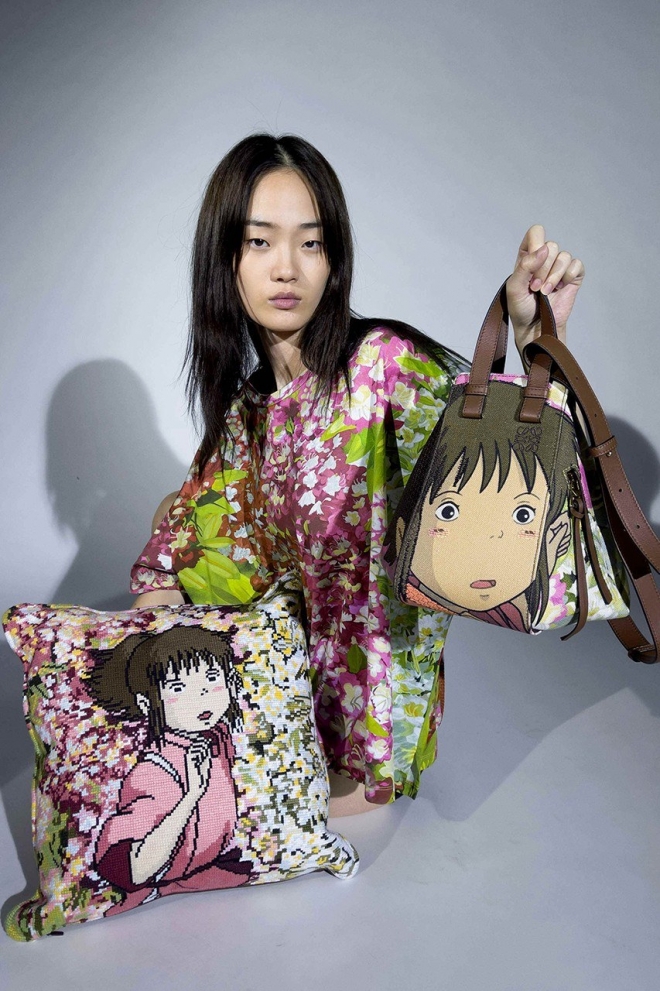 The collection is the second and the latest in a multi-year partnership between the two brands, with the first out last year and based on Studio Ghibli's 1988 film My Friend Totoro. Loewe's Creative Director Jonathan Anderson says that the animation studio is one of his all-time favourites when it comes to film.

"Studio Ghibli's exquisite storytelling is matched by a tireless dedication to craft in order to bring their enchanting films to life," Anderson said in a press release. "Such love for the possibilities of craft—and the painstaking nature of working by hand—is something we truly nurture at LOEWE. This shared commitment to the magic of handcrafted things is where our connection lies."

While it all sounds cute, with a price tag that spans $550-$6,400, a cuter experience is watching the film for free on Netflix, where the entire Studio Ghibli catalogue currently lives.

Two decades ago, Spirited Away became the highest-grossing film in Japanese history and the first hand-drawn and foreign-language film to win the Academy Award for Best Animated Feature — and is still the most fascinating rewatch from the animation house if you want our opinion.

If you're looking for something a little newer, Studio Ghibli has announced a forthcoming new film called How Do You Live? While we're still awaiting a release date, we're hoping it's everything our heart desires.