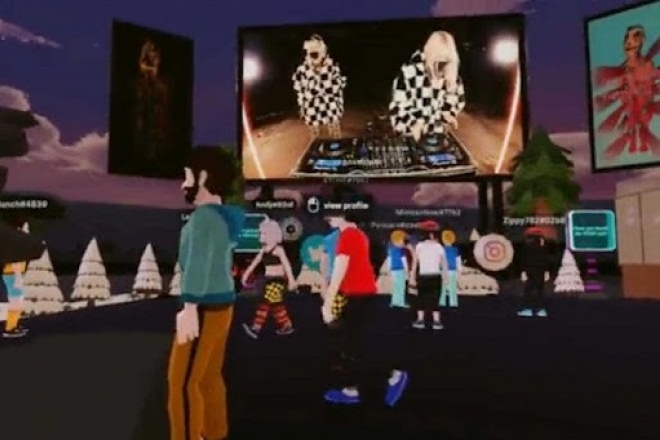 On Thursday, January 20, eager punters across the globe slipped on their best virtual party outfits for what turned out to be, potentially, the worst rave of all time.

When hundreds flocked to "decentraland" last night, the virtual world platform encouraging users to buy its "plots of land" with cryptocurrency, many were expecting a rave - or something of the sort.

“This is the metaverse” proclaimed Alex Moss on Twitter, CTO of NFTU and a self-professed NFT enthusiast, showing off a clip where tens of lifeless avatars stood still in front of a screen.

The event - hosted by both Moss and artist Bjarne Melgaard - was allegedly set up to celebrate the launch of a forthcoming NFT named ‘Lightbulbman’.

On the line-up, Prins Thomas, Lindstrøm, Might Be Twins, and more were announced, but could only be watched through a virtual screen in front of the dancefloor.

Reviews of the rave, lovingly titled "THE LIGHTBULB MAN HATEFUCK METARAVE," have since flooded in - with an overwhelming thumbs down, several even attending the event to check out just how bad it really was.

“A handful of people floated 6-10 inches off the ground, travelling above the terrain without moving their legs,” reported one attendee to VICE.

“Strings of numbers or text or perhaps just lines floated from the ground into the blue, cloud-scattered sky but did not render. I walked up a spiral staircase, through an invisible wall, and fell through the stairs back to the ground,” they reported.

On Twitter, users joked about the dull event: “The Metaverse is the worst possible incarnation of Second Life where u can either digitally shop at Wal Mart or hang out with Bored Ape bros & chat about the price of Ethereum as your avatars stand still at a 'rave' with tech house pumping in the background,” one person said.

The rave was also sniffed out by PlayStation’s creator Ken Kutaragi who snubbed the virtual platform as he asked: “You would rather be a polished avatar instead of your real self?"

“That’s essentially no different from anonymous messageboard sites,” the 71-year-old told Bloomberg News. Some even compared the virtual event to PlayStation’s golden era - over a decade ago - where PlayStation Home brought users together, in a visually similar scenario.

Bleak videos of the virtual party started to cause a stir online once outsiders caught a glimpse of what might just worryingly be the future of the rave. “NFTs and the Metaverse are such a strong demonstration that money and funding is more important for making something ‘big’,” said journalist Zito on Twitter.

“All this shit sounds and looks stupid, and no amount of presenting it as futuristic and game-changing can hide that fact,” he said. "Such an impoverished and dull vision of the future.”

NFTs and the Metaverse are such a strong demonstration that money and funding is more important for making something “big” than anything else because all this shit sounds and looks stupid, and no amount of presenting it as futuristic and game-changing can hide that fact. https://t.co/fV74SE0aD9

While some people turned their nose up to the crypto-futuristic hellhole that starts to set in, others jested about the unusual setting. "I think we need to gatekeep term ‘rave’,” joked Canadian musician Jacques Greene.

“Metaverse shit all looks like a sketchy free game you downloaded in 2004 that bricks your family's computer,” said another user, while another teased: “Even the best pinger couldn’t make this passable”.

Though the future might be bright for NFT hoarders, crypto bros and the likes - it looks like partygoers might stick to real-life clubbing for a little while longer.