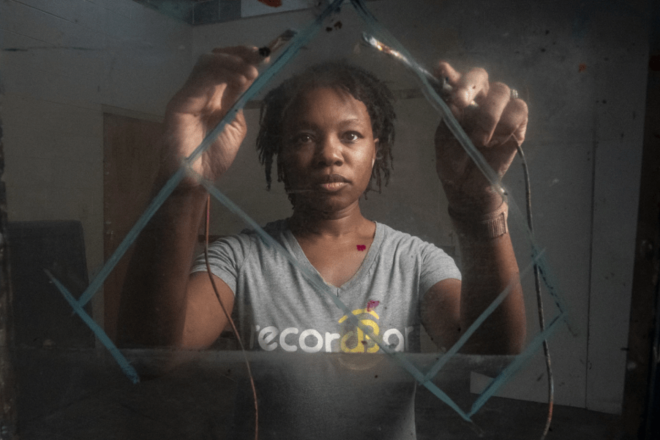 Kansas City artist Camry Ivory has created a transmedia method to literally combine the world of art and music through a self-made instrument called the Coloratura — a piece of art that writes your next song. Derived and defined in the world of music of Italian descent, Coloratura’s direct translation is an “embellishment in vocal music” from the Merriam-Webster dictionary which also means “to colour”.

Speaking from true meaning from its original use, Ivory’s instrument combines the art of painting by using electrical paintbrushes against a metal canvas that is a circuit board which then leads to a midi controller. There are a total of 12 paintbrushes, each with its own note in the musical scale. Imagine hearing what the colour blue sounds like. We’d like to think a bright yellow is linked to a happy note.

Read this next: You can now turn your Nintendo Switch into a controller

Through many deals of trial and error, the notes are based on a system developed by Steve Zieverink, allowing the end product to use notes that play together in a harmonious state. Ivory also adds that it uses music production software that allows her to loop notes while adding extra effects — which is what you’ll be able to hear in her videos below.

Being a singer/songwriter herself, Ivory has been able to use her primary piano skills to explore a new way of creating her own music through the Coloratura. According to her interview with KCUR 89.3, she mentions how "Music is definitely a beautiful art form, but it felt one-dimensional at times. I was just communicating, you know, sonically, but I wanted to add the visual elements to my work."

By creating this new avenue of sensorial exploration, she’s also tapped into those who have a unique condition called synesthesia — a cross-over in senses which allows one to see sounds or hear colours. This transmedia project has a strong therapeutic advantage that can be used to help many who aren’t able to express themselves in a way that's often labeled as "normal" in a musical or artistic manner.

Currently, Ivory has garnered local attention to raise funds for developing her instrument. Let’s hope that this reaches far and wide so we can tap into this soon here in Asia.