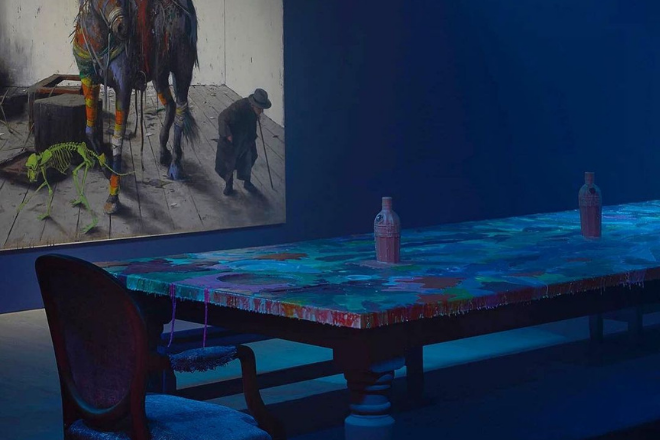 If we follow the traits of Darwin's theory of evolution, with the influx of information we digest on a daily basis — we find ourselves thirsty for something out of the ordinary. Our brains have developed an appetite for the experiential and Beyond the Road in Seoul is feeding us just what we need.

Referred to as "music you can see, smell and touch" by the Korea Times, the installation comes from the creative musical mind of James Lavelle and his British electronic band UNKLE and theatrical producers of Punchdrunk — Colin Nightingale and Stephen Dobbie. Lavelle's established history in the music industry and his dedication to the world of art since his first exhibition in 2010, coined the vision to the aesthetics for this multi-sensory world.

“It started for two reasons: firstly, purely creatively,” explains Lavelle to Elephant, a publication centred around art culture. “Secondly, because you realize how ‘disposable’ music is, as a generalization; I was intrigued about putting music into a different environment, how to make a record into an installation, and the way that people would spend time engaging with the work and its emotion.”

Beyond The Road's immersive experience focuses on all the four senses in our body to highlight one — the sense of sound, particularly music. An installation of lights, art, smells and sounds influenced by UNKLE's previous albums — The Road: Part I and The Road: Part II was the core to how Nightingale and Dobbie created this sensory adventure. Visitors are welcomed by the metaphorical artwork inside, which is loosely based on Lavelle's previous collaborations with visual artists throughout his musical journey. Along with UNKLE's music as a guiding light through the maze, its aim is to showcase a new way to experience sounds comparative to the already existing modes such as concerts and live streams.

Showcased as an interactive labyrinth, visitors choose their own journey through 33 audiovisual rooms of paintings, films, sculptures and an entrance that greets you with a dark corridor exposing a neon sign that reads: “There will be no miracles here.” 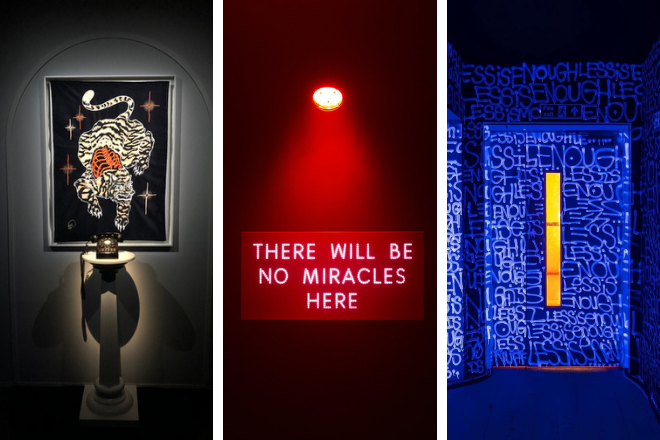 This exhibition is the second instalment from the original space created at The Saatchi Gallery in London in 2019, which only showcases 17 rooms. Another unique component of the exhibition in Seoul is the appearance of two distinctive installations of a tiger and a magpie — both culturally recognisable in Korea's ancient folk tales. "I heard that a magpie in Korea is considered as a bird of good omen," explains Colin Nightingale to Koreatimes in a recent review of the show. "In the U.K., the animal is known for its habit to collect shiny objects, and we wanted it to symbolize our creative work of collecting music."

As Seoul stamps its platform as the first city in Asia to get the first glimpse into this exhibition — we’re excited to see where it lands next.

Take a trip down the cryptic wonderland of Beyond The Road located at the Hyundai Seoul Alt 1 Gallery from now till November 28. Find more information here.