When two music heads lock into one conversation, it’s often a struggle to avoid bringing up the age-old sword-fight about the underground versus the overground — it’s an overly subjective belief system with a handful of objective values. I mean, how is underground even defined anymore? Social, economic and political pillars structure the foundation of any underground movement, but that line of crossover of when a movement becomes too large comes into question very quickly. That line is abundant with deep potholes of sticky crude that I dare not venture any further. And to my luck, in conversation with Richard, we wasted little time on the debate, both quickly agreeing that if there is one thing that defines the concept of what it means to be underground, it comes down to the level and depth of grassroots applied.

By the way, the Richard I’m referring to is Rich Price from Seoul Community Radio (SCR) — a half-British, half-Thai, pirate radio loving music fanatic that got called out for a corporate post in Seoul and ended up nurturing one of the most respected culture hubs in Asia.

And the reason I mention the underground and its ever-growing grey area is simply that the team and the values behind SCR have tread that line very successfully. From humble beginnings to humble bragging rights, it’s fair to say that Seoul Community Radio has been heralded as one of the key aggregators behind the explosion of Korean artists that have been exposed to the dance music world in more than one facet. Moreover, they’ve pinned themselves amongst the top reasons for the recent spurt of fandom for all things Korean — kimchi, Samsung, K-Pop, K-dramas like Crash Landing On You and the movement of K-house, a global term for millennial house music that’s been championed by the likes of Peggy Gou, Park-Hye Jin and Yaeji.

Although they officially launched in 2017, Rich started putting the word out to club punters about a small radio platform ready for DJs to share their sounds, but they had to learn to use a mic to present themselves — this was all new to DJs in Seoul, but it was innate to Rich as he grew up with pirate radio playing an integral part of his life. It was also around this time that local heroes like Airbear (Aaron Choe) and DJ Bowlcut (Juhwan You) were slotting in regular sets to eventually became staples on the SCR roster. Today, they are considered co-founders alongside Rich. 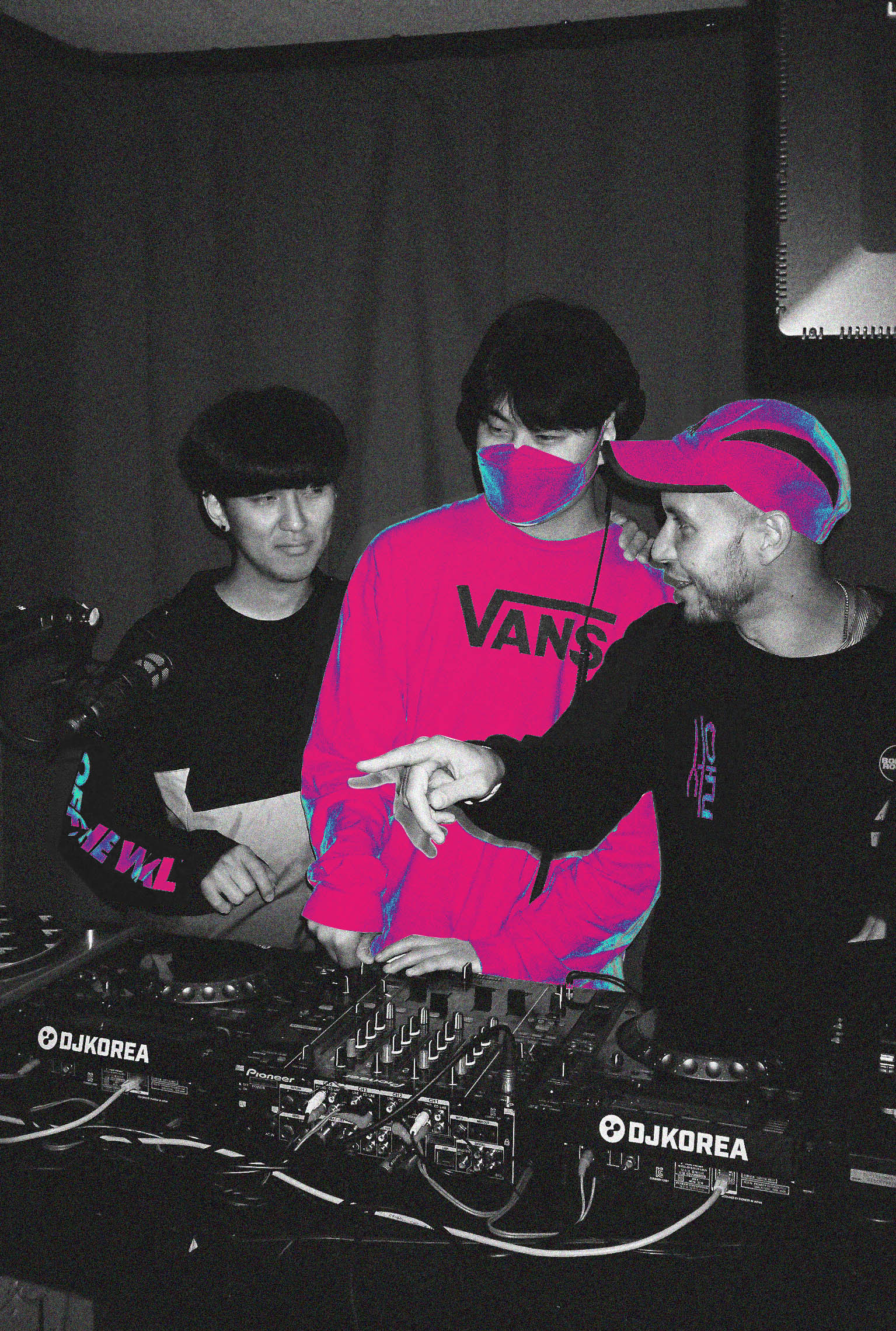 It was also at this very early point of their infancy that they were approached by Californian streetwear marque Vans — the announcement of SCRs first appearance at House of Vans Seoul was the start of a symbiotic relationship that continues to flourish today. “Our relationship with Vans goes back quite a long way...they were the first brand we worked with”, Rich tells us.

But what was it about Seoul Community Radio that appealed so intuitively to a streetwear brand that focused on skate culture and apparel, and whose musical standpoint at the time was driven by a grungier, guitar-slinging rock ‘n roller?

Grassroots check one — SCR is essentially a radio platform

...but one that proved to be ahead of its time. There was nothing else apart from a handful of clubs like Mystik (now closed) that were hosting nights for dance floor hedonists. “Mystik was a good place, like a breeding ground”, says Rich. “It helped to put Seoul on the dance music map.”

Just a few years ago, it was tough enough to tour an independent or rising artist around Asia and include a stop in Seoul, mainly due to the lack of venues but also because of the cultural crossroads that underground music and nightlife represented. No parent wanted to see their kid become a DJ, but it just so happens that it was around this time that record stores started to pop up in Seoul and DJs had more tangible connections in their hometown.

The radio grew from collecting sets from DJs and broadcasting them online, to having them recorded and broadcasted from a studio room with a green screen. Fast forward to 2020 and their most recent metamorphosis, and you have all of the aforementioned in a brand new building, equipped with a terrace, retail space, bar and a cafe. And of course, an upgraded studio space. 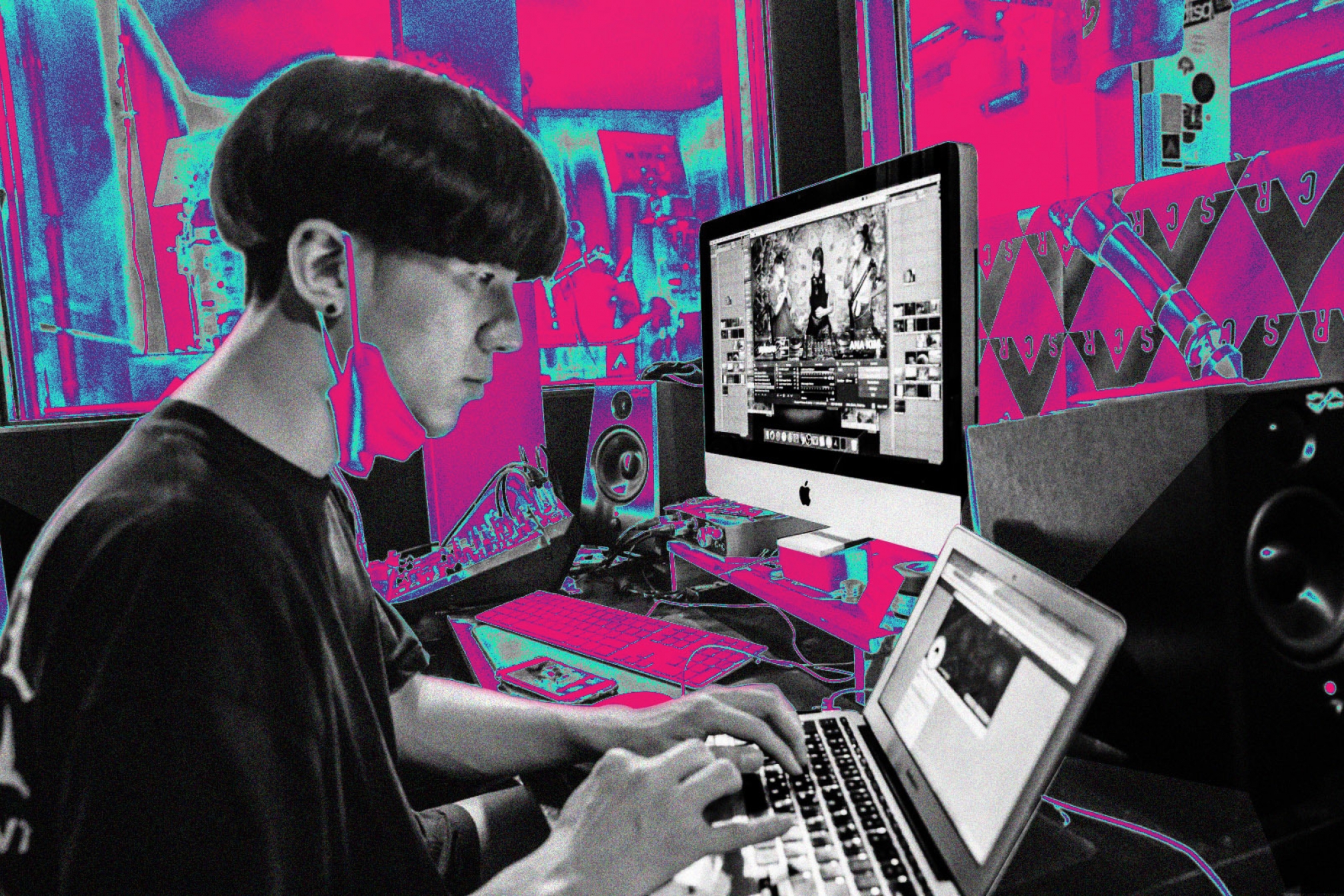 Like the Vans Musicians Wanted programme, which is a global quest to shine a light on independent artists, SCR could be easily considered a talent incubator. From an artists point of view, that is fundamentally what a good radio platform is. Some of the artists who’ve come through the studio doors of SCR are close to impossible to book again, just because of how influential and busy they became. Cataclysmic female DJs like Park-Hye Jin and Peggy Gou were regulars on the platform before blowing up. The far-out and eclectic collective Balming Tiger tamed their skills and garnered a faithful following with their ‘Joyful Delivery’ show on SCR from 2017. “I guess you you could say that we’re catching people on their way, we just hope some of them always still want to come back and hang even if not play for us.”

But before the brick and mortar were laid for their newest space in Itaewon, and budding artists and scenesters were rolling into the studio, Rich already spotted the void in what he considered to be a scene in Seoul that unfortunately wasn’t cohesive and lacked direction. “You had clubs, you had people, but there were no media covering it apart from one or two blogs.”

He elaborates further: “There were no independent spaces for people to just chill and hang out, you know… somewhere I could order a drink and just chat with my friends, or meet new people like you would at a pop-up event.”

...with its own set of egalitarian values where creative freedom reigns and just about no rules apply. As part of their new space which can accommodate intimate events of up to 60 odd groovers, SCR recently launched their latest project called Community Service where they offer their sweet abode to brands who want to connect through music and banter. “It’s all about merging”, explains the SCR co-founder. “We are an independent entity, otherwise, we are a closed shop.”

What he meant by this dichotomy is that there is a need for independents to be connected as each other, as themselves, as they come, but it’s a herculean feat to let this run even remotely like a business without some support. 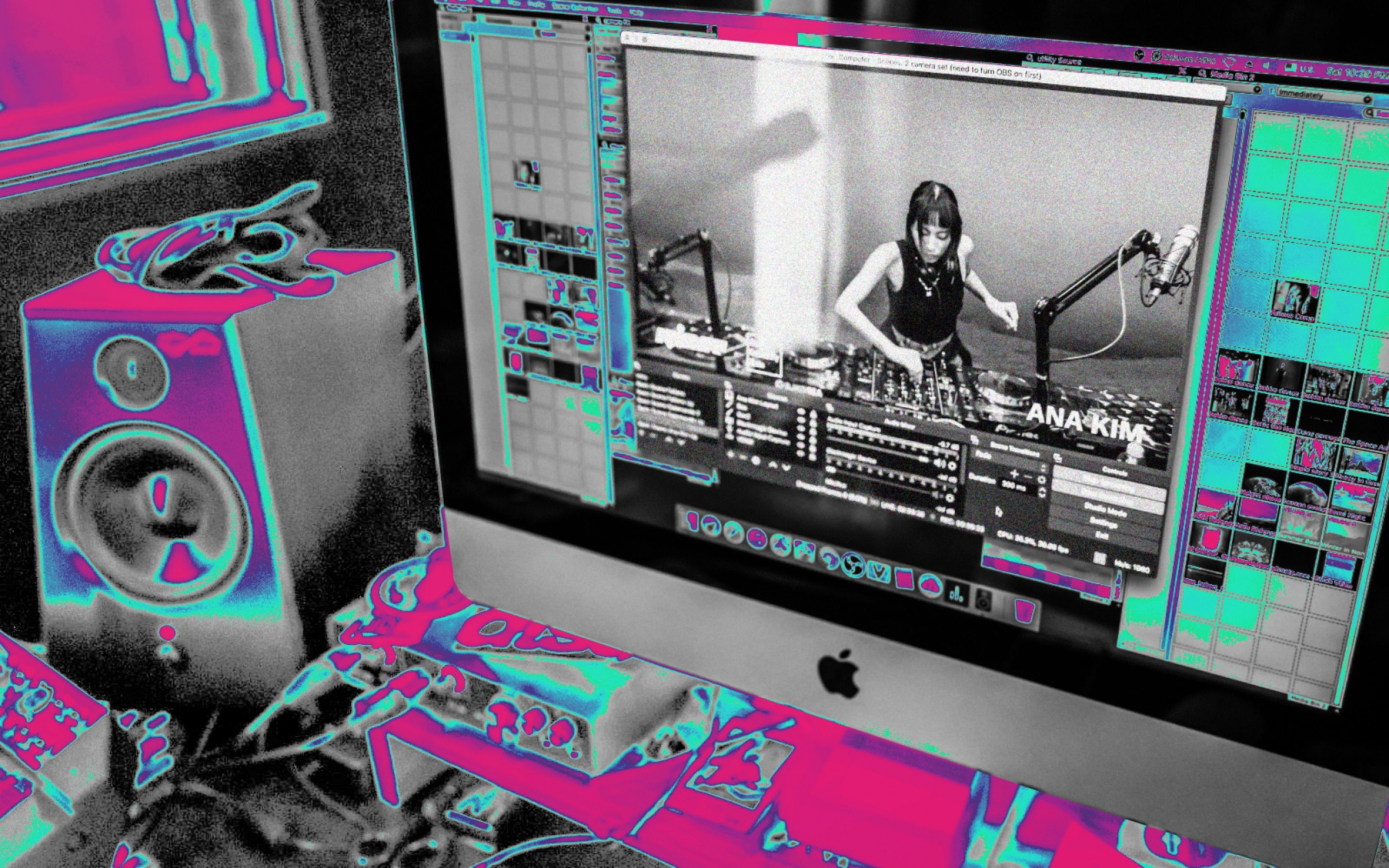 Communities, particularly those driven by subculture like SCR, also uphold aesthetic values that make them both conceptually unique and unified. Nobody likes to bring up the subject when the word underground is thrown around, but I hate to break it to you, upholding community values come with financial burdens too. It takes cash to build up a studio and kit it out. It takes time out of someone’s day (who also has his or her own bills to pay) to edit, programme and organise streams and events. But it’s all for the love of music, right? Of course, it is. The point to make here is that the price tag or cost factor doesn’t have to be a negative talking point — and this makes the SCR and Vans relationship a rather enviable one. In my opinion, they’re the kind of couple you’d take advice from, and here is my reason why.

Really good branding involves a process of humanisation — it requires commitment, communication, upholding values and most importantly, a sense of commonality. And not just because they integrate the same process in Seoul, but also, Rich agrees that "brand sponsorship is sometimes really needed, and being chosen by a brand actually says a lot. Think about it this way, who were we when Vans approached us?” By supporting SCR over the years, the notion of underground dance music from the Korean perspective took a frontside 180, and flipped the script — now the world is trying to understand Korean dance culture from a global perspective. It’s healthy, it’s positive and it’s good for everyone.

Grassroots check three — SEOUL is where the soul is for SCR

If you’ve ever visited either rendition of the SCR headquarters, one of the first things you notice is their DIY approach, just like the laissez-faire, try-not-to-care-too-much (but just enough for the things you love) attitude you find in skate culture. Skate culture doesn’t require skaters, it requires a certain attitude that when exuded, yields a result of aesthetic refinement. “Our whole vibe is very garage band like, and it always reminds me of how Vans created their Musicians Wanted platform.”

“Music is the language of SCR, no doubt, but I think now have more context to it,” Rich reiterates. "What I’ve learned to realise is that underground scenes have more in common with counterpart scenes overseas, and certainly more than within a same country or city.” And SCR has fully embraced that. For those familiar with the various Community Radios (CRs) across Asia from Bangkok — the recently revived the Singapore chapter, Hong Kong’s long-last platform, an unconventional outlet in Karachi and the Shanghai movement — none have anything to do with what Rich set up four years ago in Seoul or to do with each other, except for one thing...they are all grassroots movements that pride on connectivity through the community, and of course, through music. 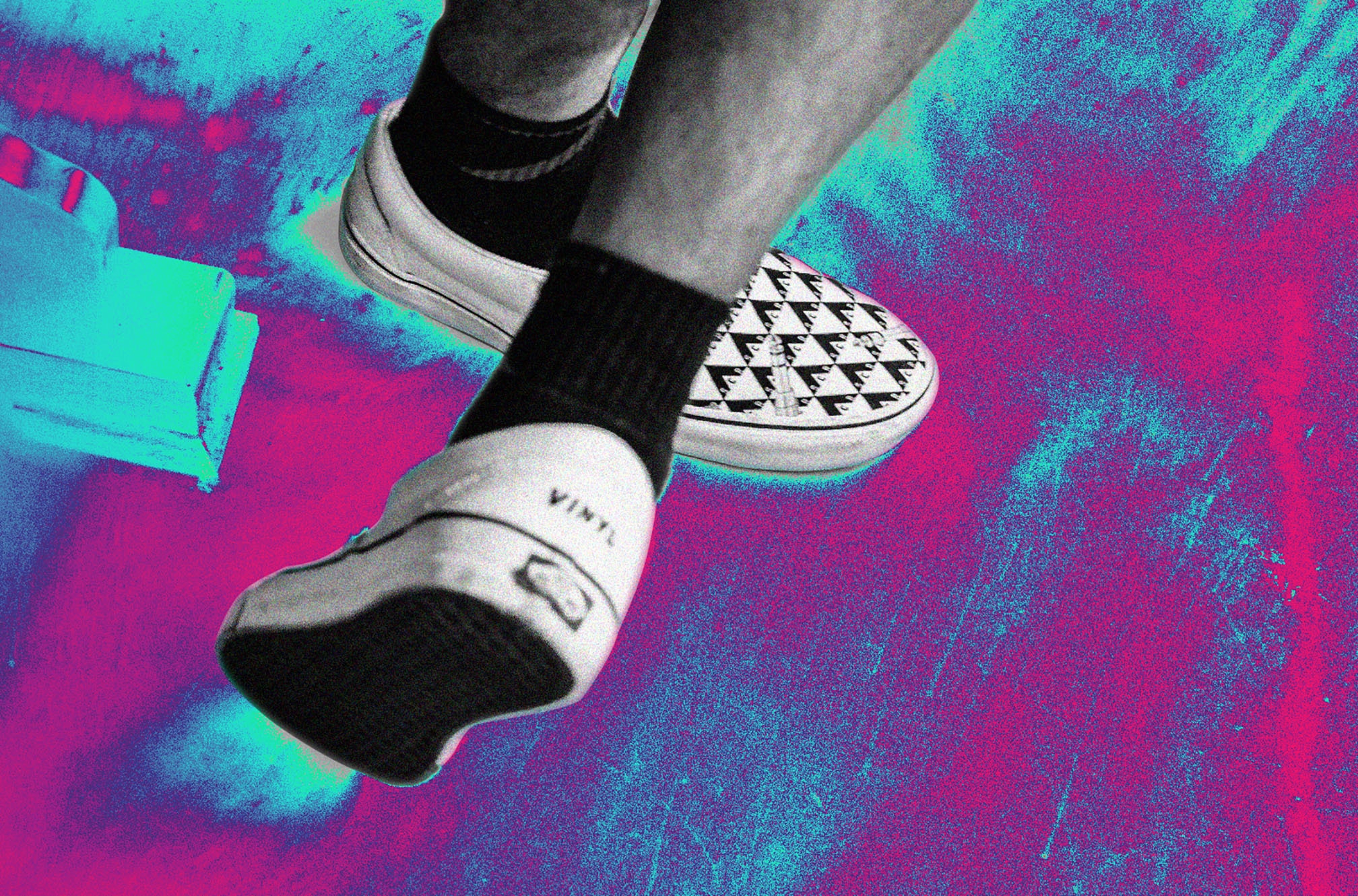 Now that they’re on a roll with a new hub, a relationship status that says married and with the world listening (they recently launched a content exchange with Rinse FM in the UK and France), Rich tells me that there’s a plethora of good stuff to come including a fresh merch drop influenced by a symbolic mural that goes up this week by Korean graffiti artist MAWZ. The phoenix he’s envisioned for their wall represents the resurgence of Korea’s nightlife after being buried by the pandemic we all faced this year. That same emblem of communal resilience will be available on a fresh merch capsule which they drop this weekend as a pop-up event with the unveiling of the phoenix, and of course, the gathering will be soundtracked by Seoul Community Radios finest DJs.