Award-winning event and collective Sunset People Project have been purveyors of monthly Sunday parties in Jakarta (and across Indonesia) for the past six years — this weekend will be no different.

Sunset People Project is run by prominent figures in the local dance music scene and was named ‘Serial Event of the Year’ by Paranoia Awards for two years straight. Commemorating six definitive years in the scene, the crew is set to hold a celebration in the capital with a line-up of esteemed names.

Taking place at Hotel Monopoli on Sunday, November 27, 2022, Sunset People Project will take over the elated rooftop space, The Moon, where both DJs and dancers can bask in the soft glow of Jakarta’s city sunset. As the day grows darker, attendees will be ushered downstairs as the crew revives the previously dormant basement venue, The Room, with a hypnotic display of LED lights. 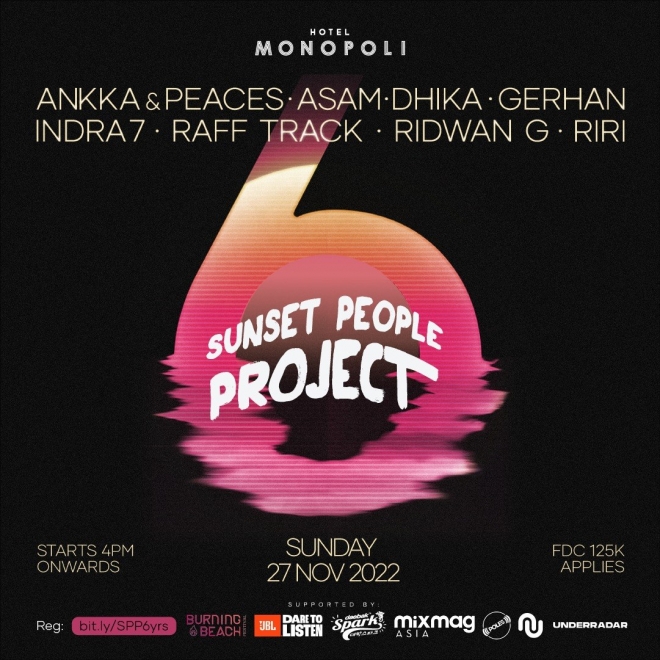 The event is sure to strengthen Sunset People Project's reputation as a sought-out platform for showcasing the fine talents of Indonesia’s electronic music industry.

Speaking of, let’s get to the good part; the line-up. Headlining the end-of-week affair is French-born, Bali-based DJ Raff Track who has made his mark in hotspots such as Vault and Mejan. Alongside him are a slew of Jakarta’s most admirable names; the established Riri Mestica, eclectic producer duo ASAM, Akamady Records founder Gerhan aka Komodo plus Salt A Way stalwarts and curators Peaces and Ankka.

Completing the list are Sunset People Project’s residents Indra7 and Dhika, along with the collective’s co-founder Ridwan G.

Haven’t got anything to do this coming Sunday? Well, now you do.

More info on Sunset Project People and their events here.