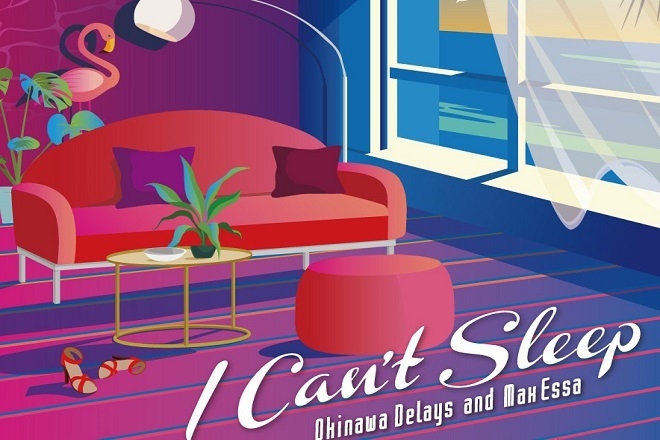 Okinawa Delays are joined by Max Essa on their third release, following on from previous outings on highly respected labels Claremont 56 and Music For Dreams.

The project was conceived by Takeo 'DJ Mizuki' Toyama who is a resident of the tropical Japanese island from which the band name is derived. Things came to life when Takeo enlisted producer and friend Max Essa to provide a remix for his collaboration with singer Satoko Ishimine, 'Nariyama Ayagu'. Max then invited Phil 'Cantoma' Mison to supply remixes – which he delivered to stunning effect – and the record was released to great acclaim on Claremont 56 back in 2017.

Now, Takeo once again joins forces with Max and Satoko to present their latest mesmerising work. “‘I Can’t Sleep’ is a song I wrote about ten years ago and demo'd but never released,” Max told Mixmag Asia. ”Takeo and I adapted it for Satoko and recorded and mixed it at my studio in Yokohama about 18 months ago." A well-known singer in Japan, Ishimine released several successful records on Toshiba EMI throughout the '90s, and her heartfelt vocal performance here radiates with an enigmatic sense of longing. “She is a fantastic singer and great to work with. We’re over the moon with the final result."

The song comes in three versions, each sharing an undeniable ocean-side feel yet suitable for subtly different moods. Max Essa's original glides along blissfully with warm pads and delicate pianos cemented by a catchy bass hook, its well-placed instrumentation leaving ample room for Satoko's vocals to take centre stage. Italian maestros Leo Mas and Fabrice offer up a hypnotic dub take in their 'Sol Levante' version – retaining the feel of the original but stripping things back and solidifying the beat for a heads-down, eyes-closed trip. Finally, disco don Pete Herbert's version is perhaps the snappiest of the three, with the prominent bass driving the groove, and the original parts used sparingly to allow space for disco guitar licks, cowbells and staccato synths to build to a floor-filling frenzy.

Okinawa Delays and Max Essa 'I Can't Sleep' is out July 17 on Archipelago Records. You can buy it here