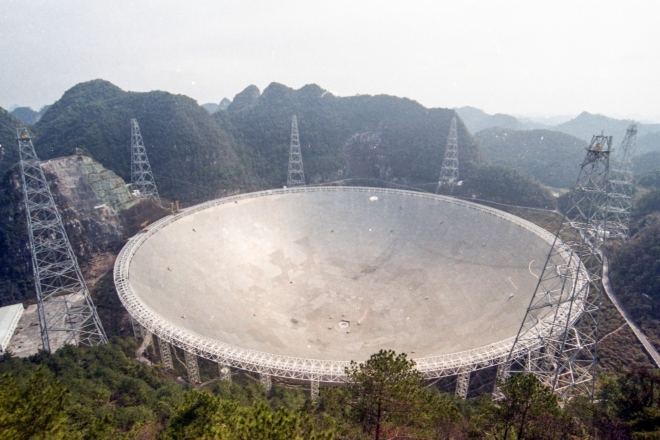 ‘Sky Eye’, the world’s largest radio telescope, detected narrow-band electromagnetic signals different from any other ones it’s captured before.

The discovery from the Five-hundred-metre Aperture Spherical radio Telescope (FAST) located in China’s southwestern Guizhou province was initially published in a report by the state-backed Science and Technology Daily. Oddly enough, the report has now been removed from their site.

The report cited Zhang Tonjie, chief scientist of an extraterrestrial civilization search team, who is reported to have mentioned the discovery of two sets of interesting signals back in 2020 while examining data gathered from the year before.

Another suspicious signal was also detected this year from observing the data of exoplanet targets.

Tonjie underlines that China’s ‘Sky Eye’ plays a crucial role in the search for alien life since it’s particularly sensitive in the low-frequency radio band.

However, Dan Werthimer, the Marilyn and Watson Alberts SETI (search for extraterrestrial intelligence) Chair in the Astronomy Department and Space Sciences Lab at the University of California, Berkeley, is quite sceptical about the signals.

"These signals are from radio interference; they are due to radio pollution from Earthlings, not from ET. The technical term we use is 'RFI' — radio frequency interference. RFI can come from cell phones, TV transmitters, radar, satellites, as well as electronics and computers near the observatory that produce weak radio transmissions," he explains.

However anticlimactic this discovery may turn out to be, there’s still hope of coming across forms of alien communication. All it takes is to venture out to the far side of the moon where radio telescopes would be shielded from all of Earth’s radio pollution.