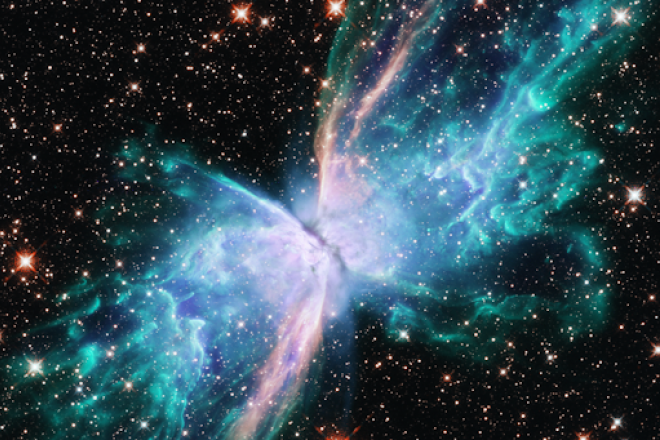 Nebula is a giant cloud of dust and gas in the Milky Way and comes from either an explosion of a dying star or the regions where new stars are beginning to form. These breathtaking interstellar clouds could be the end of something…or a new beginning. But, have you ever wondered what these fairy dust formations in the Milky Way galaxy might sound like? NASA might have the answer.

NASA, or the National Aeronautics and Space Administration, has shared a musical representation of the Butterfly Nebula via Instagram. They created the deep space sounding music through a method called data sonification — the translation of data to sound — and paired it with a wide range of instruments.

“Panning from left to right, each wavelength of light has been paired with a different family of instrument to create a symphony of soothing sounds,” said NASA on the Instagram post. “The “wings” of the butterfly are identified by strings and synthetic tones, while stars are represented by a digital harp.”

The Butterfly Nebula, also called NGC 6302, is a bright cluster and nebulae of planet Earth’s night sky. Named for its resemblance to a fluttering butterfly, it is located around 2,500 to 3,800 light-years away from Earth. The dying central star of the Butterfly Nebula has also become extremely hot, with an estimated surface temperature of about 250,000°C. The Butterfly is shining luminously in ultraviolet light but hidden from direct view by a dense torus of dust which created a pair of space cloud wings.

The close-up image NASA used for data sonification was recorded back in 2009 by Hubble Space Telescope's Wide Field Camera 3, which was installed during the final shuttle servicing mission.

Although the sound clip may not be fully accurate to what it would actually sound like in the space, as NASA said, it just gives us all the feels. Listen to the soothing symphony from below.