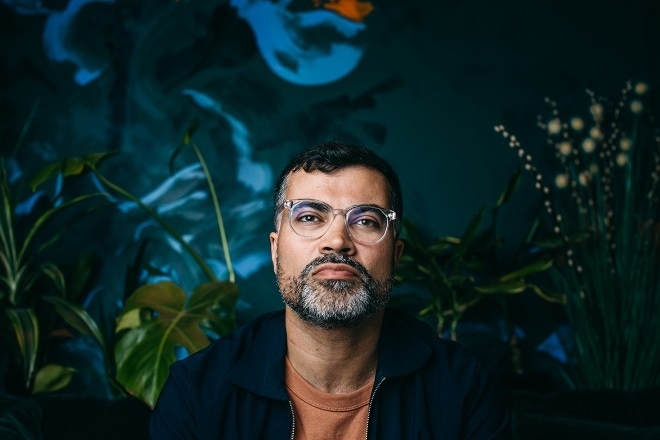 Auntie Flo has just released the spellbinding 'Bells In The DMZ', a deliciously immersive two-track EP recorded during a 2019 visit to South Korea.

Producer, DJ and award-winning sound designer Brian D'Souza – perhaps best known as Auntie Flo – has released global-facing sounds on labels including Brownswood, Kompakt, Permanent Vacation, Disco Halal, Toy Tonics, Autonomous Africa, as well as his own Highlife imprint. He broadcasts via the always-reliable Worldwide FM radio station, has played music at the world's most revered venues – both as a DJ and with his live band – and has remixed artists including Oumou Sangare and Baba Maal, Sarathy Korwar, Crystal Fighters and Chvrches.

The EP's opening track 'Peace Bells' contains field recordings captured in the DMZ 'no man's land' between North and South Korea. “Bells In The DMZ was recorded in South Korea,” says D'Souza. “The name derives from a tour I did to the demilitarized zone that divides the North and South. There is a tree there with lots of little bells on it – I took a sample of them and that formed the basis for Peace Bells.” The hypnotic instrumentation is hugely affecting, creating an eerie sense of mystery as cascading drums build a vividly dramatic feel.

The release also contains 'High Flight', a remix of a track originally recorded by D'Souza's host during his visit, American artist, Akimbo. The Tonal Unity frontman and Red Bull Academy alumnus has been enchanting audiences since making Korea his new home a few years ago, thanks to appearances on Mixmag Asia Radio, BBC Radio 1, Worldwide FM, Rinse, Boiler Room, NTS, and the Ableton blog. Here, infectious synth melodies glide over subaquatic bass as reverb-soaked percussion helps to propel the groove. Both immaculate tracks feature traditional Korean instrumentation, with the 'daegeum’ played by Seungmin Cha, and the ‘gayageum’ played by Oh Yeon Gyeong.

You can listen to 'High Flight' here:

Auntie Flo / Akimbo 'Bells In The DMZ' is out now, you can buy it here