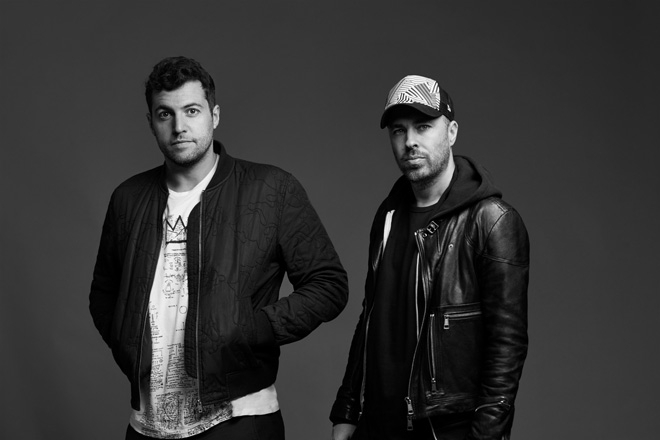 The duo of Waze & Odyssey have been quickly ascending the house music scene since their first release in 2012 and today they found a fitting new home for their first track of the year on Eats Everything's Edible imprint. 'Down With Tha' is heavy hitting house banger that's designed to melt dance floors while the secondary song 'Seizure' takes listeners on more of a space odyssey filled with bongos and a drum workout. The tune is available for purchase today here and you can also have a listen below.

Firas Waez and Serge Santiágo have also set their sights on Asia in 2017 and have answered our regular rapid fire questions so we can get to know them a little better.

Where are you answering these questions from?

Between London town and Brighton!

What's the most unique hotel you’ve ever stayed in?

Wythe in Brooklyn is very hipster but their bar has the most amazing view of Manhattan. That whole area is nuts, when we first visited in the early 2000's there was nothing going on - now it's next level.

What was the worst job you had before you were a successful touring artist?

Delivering Chinese take-out as a late teenager getting them coins in!

What's your favourite band/music right now outside of the dance music industry?

Metronomy are pretty amazing - we watched them at Glastonbury a few years ago when we DJ-ed. They were next level. To be honest have been fans since first moving to London. It's been amazing to watch their progression into the act they are now.

Do you have any pre-gig rituals or superstitions?

What's your lamest claim to fame besides deejaying?

We met Eric Cantona this morning in Shoreditch; he was with his kids so didn't want to bother him but told him I thought he was cool and he said 'Thank you' so it was a rather nice, cordial exchange.

What's the strangest cultural thing a promoter has ever taken you to do?

Got told to go to the Russian and Turkish baths (hammer) in New York's East Village; it's not the sort of thing you'd do in London, maybe Istanbul; but anyway it was amazing, you go, you sweat, you jump in cold water, you can even have a massage. There's a guy called Eddie Huang on Vice Munchies who goes on one of his TV shows online, you can take a look. It's a real NYC thing to do.

What are your hobbies besides deejaying?

Food is a big one, collecting records, computers!

The biggest regret or missed opportunity with respect to your music career?

It's pointless having regrets.

Most bizarre situation you've ever found yourself in?

Getting asked by a man and his girlfriend / wife if we wanted to go back with them.

What is the most embarrassing thing you have ever done while performing?

What's the best interview question you've ever been asked (besides this one)?

They can often be a little bland, but this one is actually quite good!

The strangest thing you've ever eaten while on tour?

If you could spend a day with anyone on the planet, who would it be?

What do you like to spend your money on?

What's the weirdest thing you've ever seen happening from the DJ booth?

Occasionally you get some very heavy petting on the dance floor.

Loving the new one from Citizenn on our label Street Tracks