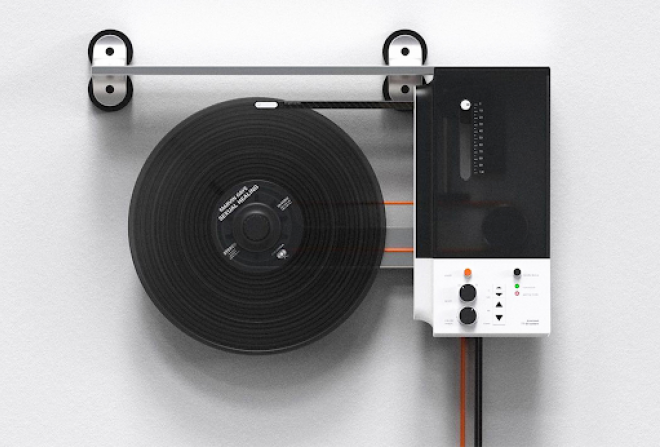 Swedish designer Oscar Olsson has designed a novel concept in the world of turntables he calls the TT-90 System. The name isn’t an arbitrary collection of letters and numbers; TT for turntable; 90 for the 90 degrees it has been rotated to attach vertically to your wall.

The project served as a bit of a practice in various design tools that ended up producing a pretty stylish result. The benefits of a wall-mounted turntable are obvious: for one, that it could be placed freely on the wall gives so many more options than being limited to the surface of a cabinet or desk; secondly, it just looks damn cool.

Olsson did his best to cover the bases of most concerns you might have for a gravity-defying turntable such as this. A rigid steel frame would offer a strong structure to the vinyl player when it hangs on the wall, while an electronically controlled, lightweight, carbon fibre arm would serve as the vehicle for the needle. To keep the vinyl disc itself from flying off the mount and recreating a scene from Will Smith’s Wild Wild West on one of your dinner guests, a threaded knob holds the disk in place during play. The designer has even gone so far as to keep music quality in mind, by attaching rubber pucks at the points where the mount attaches to the wall in order to eliminate vibrations.

All of the structural considerations aside, the design of the thing itself is very slick. According to the designer’s concept page, he wanted the record player to communicate that it is an “unusual record player”, with its deconstructed design and sleek blacks and whites with a hint of orange.

“I got inspired by pragmatic designs, driven by function, that are not afraid of exposing functional components. I believe this is a very natural way for a product to communicate how it works – function is form, and form is function. I also wanted the product to be playful, to spark interesting discussions around it.”

Olsson also wanted to explore how old and new technologies could better cooperate with each other, by having the vintage technology of a vinyl player sync to a smart device like a phone. The interface for such a device is featured as one of his designs and is as minimal as the design of the player itself.

There are three main reasons behind the creation of the vertical turntable. The demand for turntables has been increasing. At the beginning of the summer, we reported that vinyl sales have increased by 108% since the beginning of the year and 19.2 million vinyl albums were already sold in the first half of 2021. The more obvious reason is that the standard record player that we all are used to seeing does take up a lot of space and it could be a headache to think of a sweet spot for it. In addition, unlike many other devices like CD (remember those?) or mp3 players, not much has changed in terms of the appearance in the area of record players for a long while.

Head to the designer’s site to see his concept art in full. We hope the design is fully realised someday so we could throw a few up on our walls.