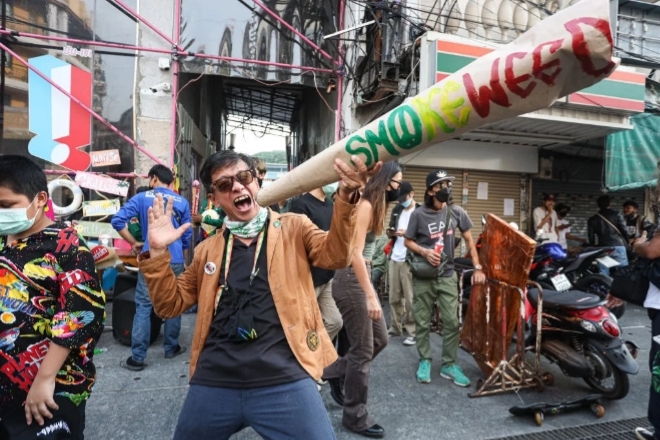 Initiated by Highland Network seven years ago, the annual Thailand 420 music festival kicks off today and is bound to go down in history. The two-day revelry marks the country’s decriminalisation of cannabis which officially happened yesterday.

‘Thailand 420: Legalaew!?’ (the Thai word for ‘legalised’) is a significant milestone in history as the nation becomes the first in Asia to legalise weed, taking it off the banned drug list effective from June 9, 2022. The festival that was scheduled for an earlier date was postponed to June 11-12 to celebrate this new government permission.

The law also states that anyone who produced, imported, exported, possessed, sold or consumed cannabis before June 9 is no longer deemed as an offender or convicts. This means more than 4,000 inmates will be released from Thailand’s prisons, adding more reason to celebrate.

The two-day festival takes place at White Sand Beach, Nakhon Pathom Province, an hour away from Bangkok. It offers not only three styles of music performances, but also 420 games, extreme sports, forums and workshops about growing your own pot and countless shops. It’s very likely that cannabis products will be sold there for the very first time.

Read this next: Snoop Dogg raises salary of his personal blunt roller due to inflation

With cannabis decriminalised, it’s expected that more artists, especially those from countries that have yet to revel in such freedom, will visit Thailand more often to organise parties and performances, shaping the country as Asia’s melting pot for creativity.

Get a glimpse of what’s in store at this year’s festival and check out their 2018 event playback video below: