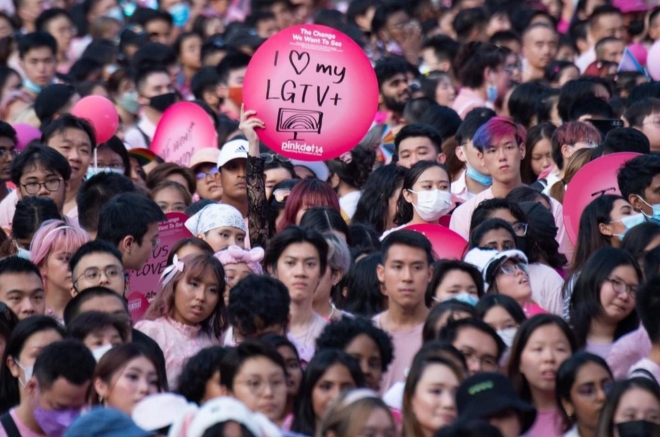 Growing support for Singapore authorities to decriminalise gay sex has been highlighted a little extra this year; from Law and Home Affairs Minister K. Shanmugam speaking to the country’s parliament in March about the discrimination faced by people from the LGBTQ+ community, to seeing the LGBTQ+ community being able to gather earlier this month at various events celebrating June as Pride Month.

The growing support to repeal Section 377A from Singapore’s penal laws was seen by thousands clad in rainbow colours and pink flags as they swarmed across the city to attend multiple pop-up events and rallies. One of the highlighted events held on June 11 was PASAR PINK, organised by Pinkfest in collaboration with Sunday Social, a pop-up market event curated by Blackout Agency, which saw over 3,000 people come through.

The event was held at Sing See Soon, a nursery in the east of Singapore, and featured over 35 vendors which included many local LGBTQ+ brands, artists, crafters, and bakers. And a good pop-up market in Singapore doesn’t go complete without DJs — curated by Zig Zach from Blackout Agency, the weekend’s line up saw KFC, Shigeki, Meraki Soul, Yujin, James Selva, Hookstyle and Zig Zach himself dishing out daytime grooves.

Read this next: Thailand shimmies closer toward marriage equality

Other events around Pinkfest that are happening throughout the month include workshops, movie screenings and even job interviews with LGBTQ+ friendly companies.

This past Saturday, 18 June, as a follow up to PASAR PINK, a rally took place in what was considered as the largest pro-LGBTQ+ rally in Singapore, where thousands gathered in Hong Lim Park for the second week in a row. This time, it was to repeal Section 377A. 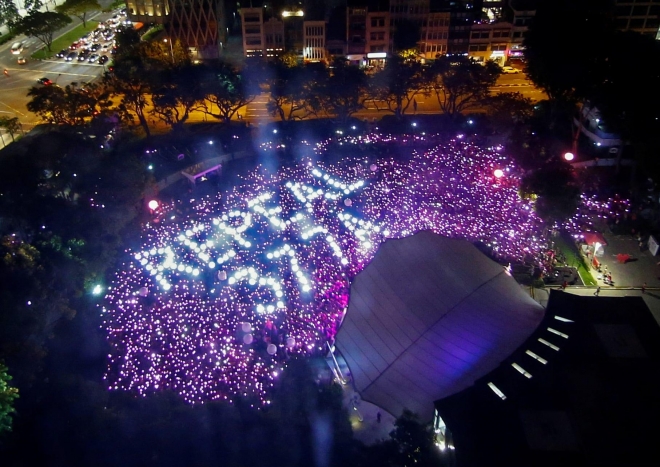 Speaking to Mixmag Asia, Pink Dot SG’s spokesperson Clement Tan said, "Our demonstration this year is a response to the government's promise to review its policies to reflect shifts in social attitudes. We invited participants to collectively envision what a more inclusive future for the LGBTQ+ community could look like, which includes not only the repeal of Section 377A, but also many other aspects of discrimination in housing, education and employment. Participants were encouraged to pen these messages down on placards, as well as in direct messages to their Members of Parliaments via postcards.”

Read this next: Cats on Crack is fighting for arts in Singapore by paying a dollar per smile

Tan continued by saying, “We're very encouraged by the turnout this year, many of whom were youths attending Pink Dot for the first time. Although the virtual events we organised in the last two years were well-received, a physical Pink Dot is always special and important for the LGBTQ+ community. This is about unapologetically taking up space. And for many of us, it is the only time that we can be our authentic selves out in the open, surrounded by a community who supports and loves us.”

Singapore officials' response has casually and continually leaned on the notion that the LGBTQ+ community are no different to any other member of society, and do not face discrimination; however even the United Nations Human Rights Council (UNHCR) has cited that Singapore's ruling from October 29, 2014, to uphold section 377A of the Penal Code violated “a host of human rights guaranteed by international law,” including the right to privacy, the right to freedom from discrimination, and the right to freedom from arbitrary arrest and detention, including protection for sexual orientation and gender equality.

Read this next: Zouk Singapore pays the price for breaching COVID-19 rules

The stringent legislation under Section 377A makes sex between men, even if consensual and in private, illegal; the law dates back to 60 years from the British colonial-era and any attempts to strike it have been meet with objection from conservative groups.

According to SCMP, talking about the latest constitutional challenge to Section 377A of the Penal Code, Minister K. Shanmugam said, “One of the things that upsets the LGBTQ+ community is that many feel that their experience of being hurt or rejected by their families, friends, schools and companies is not recognised, indeed, often denied.”

"Policies need to evolve to keep abreast of such changes in views. And legislation needs to evolve to support updated policies," said Shanmugam, who spoke up in a recent parliament session. "And if and when we decide to move, we will do so in a way that continues to balance between these different viewpoints, and avoids causing a sudden, destabilising change in social norms and public expectations."

Read this next: Help save music in Singapore by tuning into a 24-hour stream this weekend

Just last week, Singapore gave Disney-Pixar film ‘Lightyear’ a NC16 rating, making it not suitable for children under the age 16, and the film was banned in 14 Asian and Middle Eastern countries including Malaysia, Indonesia and the United Arab Emirates. The movie contains a controversial scene depicting a same-sex relationship.

In other parts of Southeast Asia, Thailand just had its first official pride parade in 16 years, which was followed by a draft law being passed to legalise same-sex marriages; four different bills were proposed and would see that similar rights were made available to same-gender marriages.