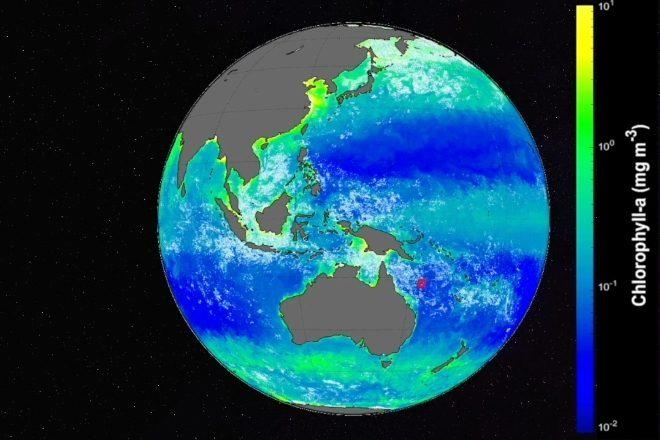 A NASA scientist and his programmer brother have created an online program that combines ocean colour and sediment data with musical notes.

The music is created by mathematically translating layers of “ocean colour” data, and every note is created using real data collected over the space of a year — the same data is used by NASA’s Goddard Space Flight Center scientists every day.

The “oceonographic symphonic experience” was created to highlight the interconnectivity and ambient nature of the ocean through the use of sound, in order for people to measure and hear for themselves.

Read this next: China may have picked up signs of extraterrestrial life

In a press statement, co-creator and NASA Goddard scientist Ryan Vandermeulen said: “We wanted to tell a story to appreciate the connectivity of our Earth’s ocean through this aural sonic experience.

“We use music because it’s engaging and dynamic and connects us across a wide variety of backgrounds.”

He explained that the idea first came when he was studying data from the Rio de la Plata, a river estuary formed by the Uruguay River and the Paraná River in South America.

He was mesmerised by the readings showing sediments swirling off in the map, and instantly thought about what the phenomenon would sound like.

He explained: “I started by extracting transactive data from satellite images. I looked at the patterns of the red, green, blue channels. Clearly, they weren’t travelling in the same direction. There was something there. The data itself, you’re listening to it as it exists. The variations are creating a natural palette for the ear.”

His brother, programmer Jon Vandermeulen, was then involved in the project to merge the ocean data with sound.

Jon created an interface that translated data to musical notes, and then extracted the data-created notes to GarageBand - which the pair used as their digital audio workstation.

Read this next: Scientists discover that scallops love “disco” lights

The pair have now created more musical interpretations of the seas - including the Bering Sea, the Indian Ocean of Northwest Australia, and the Coral Sea.

For the Coral Sea, Ryan Vandermeulen was studying the ocean’s colour- which helps scientists to gain a greater understanding of the impact of phytoplankton within water systems.

He noticed the patterns that were created by the colours observed in the sea, and thought about how these patterns would translate into sound.

“Instead of interpreting this into a picture, what if we could translate these variations into this sonic experience – something that could stimulate our brains in a different way.”

Listen to the ambient, synth-sounding sonification of the Coral Sea. The melody is made using a year’s worth of data and it uses a 32-day average of the amount of chlorophyll-a found in the water.

Find out more about these ocean sonification projects and other audio projects by NASA scientists on the NASA website here.