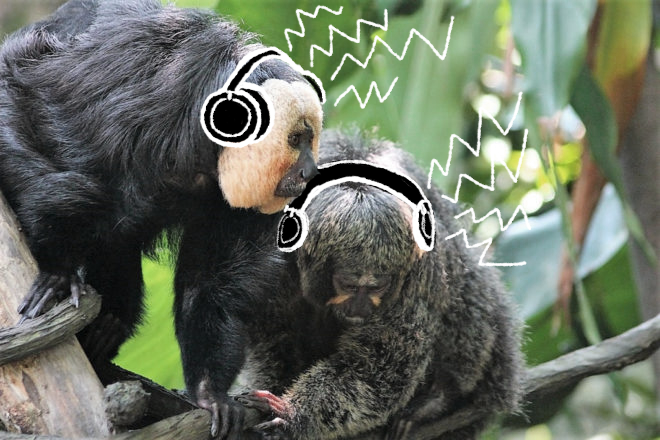 Do monkeys have free will?

A team of Finnish scientists from Aalto University’s Animal-Computer Interaction research team have developed a sound device for a group of white-faced saki monkeys at the Korkeasaari Zoo in Helsinki. Studies have shown that primates process visual information in very similar ways to humans, but little is known about how primates process audio. And what about music? Do some monkeys like d’n’b more than others?

After testing two prototypes, the sound device was built: tunnel-shaped, with a plywood base and a transparent acrylic ceiling, it was tailored for the monkeys’ habitat and could be easily switched on and off. For several months, these sound devices were placed within the monkeys’ enclosed habitat, loaded with different genres of sounds: “calm music”, “fast-paced electronic music”, rain sounds, traffic ambience, or silence. No harsh or loud sounds were embedded into these sound devices, so as to ensure the sakis’ peace of mind: these are not sounds of predators. Meanwhile, the researchers observed.

“It was essential to give animals decision-making power and independence. . . Instead of just playing music and other sounds in their living environment and seeing how it works, we gave them a system that they could approach and use themselves," stated Roosa Piitulainen, an author of Aalto University’s research paper.

It turned out that the sakis chose to use the sound devices regularly, and even began to “sleep, groom, and socialise” with other monkeys inside the device. The most popular choice of sound was… (drum roll) traffic ambience.

"I've been working with animals for a long time, and learned to keep an open mind. However, given that the sound of traffic is so unfamiliar to the sakis and not related to their normal daily life—unlike, for example, the sound of rain—it came as a surprise that they were interested in those sounds," said Ilyena Hirskyj-Douglas, a postdoctoral researcher at Aalto University. Perhaps these monkeys are manifesting their move to the city. Small monkeys, big dreams.

What’s interesting is this: another study has found that compared to monkey brains, human brains have a stronger preference for pitch. The brain of a macaque monkey does not distinguish between regular noise and harmonic tones. “Humans have a very strong bias in their cortex; their brain responds very strongly to sounds that have a pitch quality to them compared to sounds that don’t. On the other hand, monkeys don’t. Monkeys seem to respond to sounds with pitch about the same, if not a little worse, than the way their brains respond to sounds with noise,” remarks Bevil B. Conway, a neuroscientist and artist who specializes in visual perception, in a 2019 study. Although monkeys are capable of producing pitch themselves, humans are more sensitive to the pitch of the monkey calls more than the monkeys are themselves.

So what did the “fast-paced electronic music” sound like to the sakis? Are melodies lost in the ears of monkeys? What does a pitchless world sound like? Human speech is comprised of a noise component and a pitch component; to isolate the pitch component, simply imagine someone whispering. For further auditory context, we can consult monkey music. In 2009, a cellist-composer David Teie created compositions tailored to the monkey ear, based on the structural aspects of the tamarin monkey calls. While monkeys historically have not really cared for or responded to human music, they did to Teie’s compositions. David has been working successfully in the past few years in his quest to bring music to wild animals in captivity, as well as cats, dogs and horses.

In short, I’m not so sure monkeys have free will, but perhaps music can make them feel free.