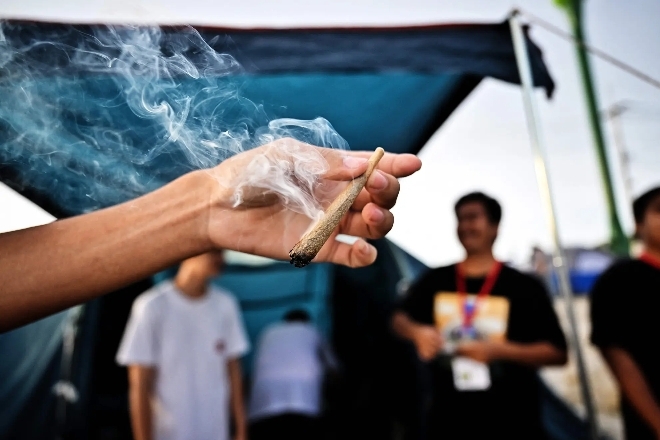 Bangkok’s ‘Cannaverse’ is set to be a one-stop entertainment center catering to those who are all about that “high” life. Planned for a February 2023 launch, the cannabis-friendly complex will take form of a private, members-only enterprise, featuring a hotel, swimming pool, spa, karaoke room and, of course, a weed dispensary.

Aric Ng, the Director of Cannaverse (yes, it’s a legit establishment) has mentioned to the media that guests over the age of 20 will be able to enter a “puff house” to smoke their joints.

When you’ve got the munchies or a case of cottonmouth, you can also head over to the restaurant where you can also, depending on your tolerance, choose either the cannabis-infused or weed-free beer.

Read this next: Thai embassies warn its citizens to keep weed within the country

“After dinner, if they don’t feel like going home, they can spend one night in one of our five hotel rooms,” Ng explains on the all-inclusive venue which will be located on Bangkok’s Sukhumvit Road.

Ng, who is the President of Malaysia’s World Digital Economy Commerce Association, has signed a joint agreement with the Thai-registered HT Global Trade, witnessed by fellow ASEAN business representatives along with Malaysia’s ambassador to Thailand, Dato’ Jojie Samuel.

Since decriminalising cannabis in June, Thailand has opened up new possibilities for national income and has now lured in international investors. Ng and his partners happen to be a part of Mycannabiz Global — the perfect target market for such investments.

However, an unexpected speed bump has come up on the high way. Just last month, the draft Cannabis-Hemp Bill was voted to be withdrawn from the House of Representatives’ agenda.

Read this next: NYC to open "House of Cannabis" weed museum

Though having already passed its first reading, opposition Members of Parliament have asked for further deliberation due to additional amendments that have altered the initial essence of the original legislation; first it had only 45 sections and now there are 69.

There’s also the matter of loopholes that would allow just about anybody to grow weed, which could lead to recreational use (instead of its initial medical purpose) and have a “negative impact on society” as mentioned by Satit Wongnongtaey of the Democrat Party.

Looks like Cannaverse will have to wait for the smoke to clear before it can allow people to light up next year.