The music industry is known for its indulgences: alcohol, afterparties and — all that's been missing is a bit of altruism to balance it all out. Fortunately more and more artists, organizers, labels and brands are beginning to look beyond revenues and towards making a difference on the planet that lends us her dance floor — and FuFu Records is one of them.

Following the launch of two successful compilations, the Hong Kong-based label returned last week with volume three of 88 – Double Happiness, a project that is aimed at elevating the profile of artists across Asia in tandem with highlighting the importance of altruism within the music industry. Vol.1 and Vol.2 explored electronic music in the region and enjoyed the support of many international artists like Move D, Soichi Terada, Kamma & Masalo, Camion Bazar, Yoshi Horino, Merve, Chida and Yu Su, and was also lauded for intersecting music with the environment via a partnership with the One Tree Planted.

One Tree Planted is an environmental non-profit with a mission to inspire global reforestation by planting trees all over the world together with their supporters — individuals, businesses and brands alike — and, while they’re at it, rebuild the habitat of critically endangered species.

Since FuFu Records released the first volume of its compilation series in March 2021, they’ve since made two donations to the NGO by donating 80% of their sales towards the $1 = 1 tree initiative (the other 20% cover the costs of design, mastering, etc). In April of 2021, $180 went toward planting 180 trees in the Philippines and then in August of 2021, another $720 was donated with 500 trees being planted in Indonesia and another 220 in Vietnam.

FuFu Records label head Florian Melinette believe it’s important for the music industry to participate in for-the-planet initiatives. “It's important to see us as part of the planet, not just as existing on the planet,” he says. “Music is an industry that has a huge impact on the environment because of international travel by artists, the production of vinyl (plastics), the use of plastic at festivals and events and even the environmental impact of the Internet.

“Our participation in supporting reforestation is one thing, but on the whole, we have to think further for the world music scene to rethink some old standards of consumption.”

Florian has long been looking at the industry through a green coloured lens. His Hong Kong-based festival Shi Fu Miz has been accelerating its green practices at top speed, and was looking forward to working with One Tree Planted until COVID hit. The festival might be on pause but Florian wanted to keep the momentum going, and applied the concept to the compilation.

“I never looked at this project with a goal of making money,” he adds. “Moreover, it would be difficult to really redistribute revenues with artists only putting forward one track. So I suggested to the artists who I approached to participate in the compilation series to donate the proceeds instead.”

The partnership with One Tree Planted will last one year and involve 32 artists across four compilations in 2021. “All of the responses from the artists have been positive and they got even more motivated for the cause.”

“I think as a living being on this planet right now, it has to be everyone's priority to do right by earth — so I'm pleased to participate in a project that is a step in the right direction,” says Pulpy Shilpy, one of the artists on the compilation. “Something to think about is carbon emissions through data streaming. Also, digital pollution has been on my mind extensively, because me — and many like me — survive by creating and streaming content. So maybe one act of regeneration just isn't enough, when the problem is me/we.”

Attis Ngo is another artist who was eager to get behind the project. “For me, participating in a project like 88 — Double Happiness is meaningful because environmental problems affect everyone on Earth, and therefore any of us doing our part to help, however small, is helping all our fellow humans. Projects like this compilation series not only give our work a unique purpose, but they form connections between the participating artists, the listeners and the common cause.”

For Florian, he was proud to see so many Asian artists believed in the collective future of not just the music industry but also the planet. “We are talking about the compilation linked to supporting reforestation but it’s not just only that. We all have to take bigger actions in our daily lives and show people that artists can do projects not only for money but also to support a more conscious way of life.

“I am happy to see all the producers who gave some amazing tracks for the compilation series, also have an interest for the planet.”

FuFu Records plans to continue this initiative each year and work with a new NGO each time around — always in Asia.

“We have for the first time of the compilation series a live band among all the producers: Batavia Collective from Indonesia,” adds Florian. “But each artist brought their own flavour to the compilation with their unique sounds and dance-worthy beats.”

Find the full tracklist below: 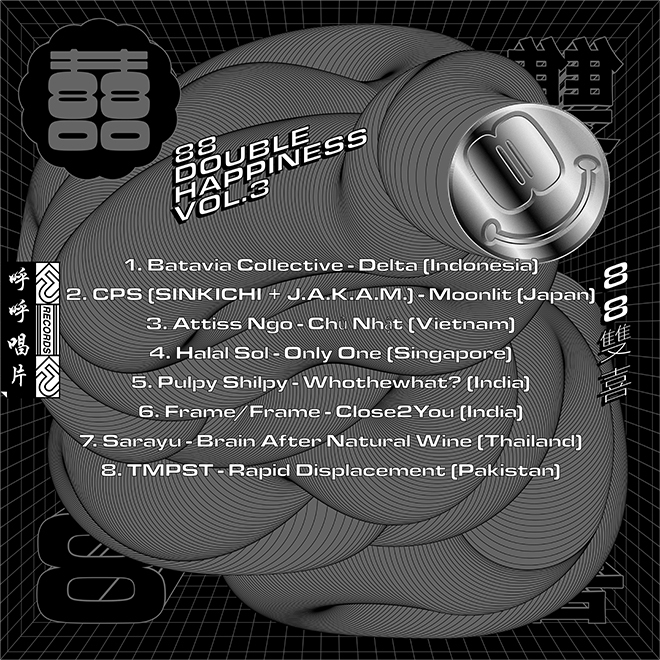 88 – Double Happiness Vol. 3 was released on September 18 on FuFu Records. Buy it here.

If you’re interested in collaborating with One Tree Planted on a project, visit their website here for more fully transparent information. Depending on where you’re located, you can choose the area you one like to concentrate on reforesting.