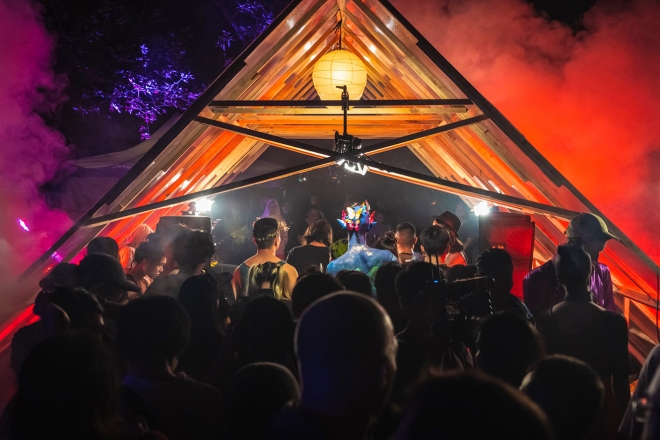 Back for its third iteration, Spectrum Formosus is the scandalous sister party to the legendary Organik Festival in Taiwan. It’s also a lot less exclusive and easier to get to that its Hualien counterpart—that's because it takes place in a tea field just outside of Taipei.

This year, the three-day event will return to the Wen-Shan tea fields as a bigger, better, more bizarre and beyond more borders kind of event. “Real, and imagined,” the event description reads. Ready for the rest?

After Taiwan famously legalized gay marriage earlier this year, it paved the way for its citizens to more openly embrace LGBT+ culture, and Spectrum Formosus are running with it. This edition will celebrate unity and shared visions while "representing the colourful diversity of Taiwan's vibrant electronic music scene, embracing and celebrating LGBTQ+ culture alongside Taiwanese traditions and local gastronomy in the mountains of Taipei."

This will be done in part through collaborations with several queer collectives like SNUG Hanoi, LGBTQ Road Chengdu, Host Hong Kong, Motorpool Tokyo, East Palace West Palace Beijing, and Pleasure Always Brings Pain. “We asked these local collectives to join forces so we can share colorful experiences, learn from each other, celebrate and build a community reaching beyond the borders of our beautiful island.”

They are also extending the invitation to everyone. “We welcome all, from across the spectrum, regardless of gender, background and sexual preference. Please feel free to join us in our celebration and represent the spectrum of Taiwan.”

With Smoke Machine at the helm, the musical programme will be forward-thinking from techno, house, disco, ambient, experimental and back—essentially the full spectrum (full line-up below).

Best of all is the event’s extended program—which has been gloriously advertised as "workshops, an outdoor cinema, vogueing catwalks, drag shows, and numerous outreach activities.”

The organizers also want to remind festivalgoers to “enjoy, love and live in the shadows of the dome of pleasure and to drink the milk of paradise." Whatever that means but we love it still...

Spectrum Formosus takes place at the Wen-Shan tea fields just outside of Taipei near Xindian Station on the MRT Green Line on November 2-3. Head to the Facebook page for more racy details. Peep the funky teaser below: