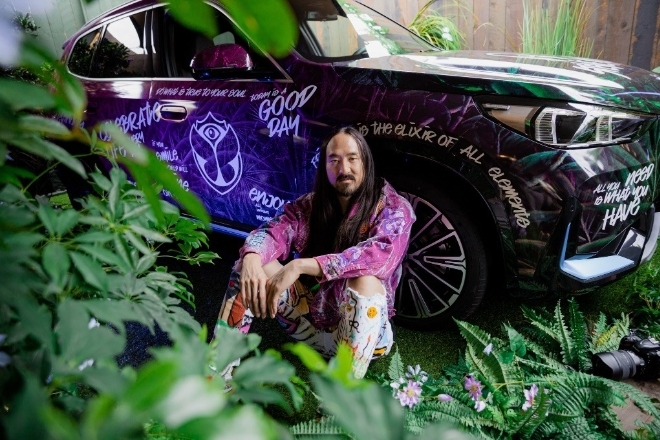 In line with Tomorrowland’s theme ‘The Reflection of Love’, Grammy-nominated producer Steve Aoki puts on his designer hat and debuted the BMW iX1 x Steve Aoki during the three weekends of the festival.

Nestled between the greens of Tomorrowland’s “Magical Forest of Joy”, the uniquely designed wrap that covered the car was co-designed by Aoki himself. The whole setup was set to encapsulate the integration of nature, technology and positive vibes… Plus perhaps to provide another object for tripped-out ravers to stare at.

Read this next: How classic cars and soundsystems connect Southall residents to their Indian roots 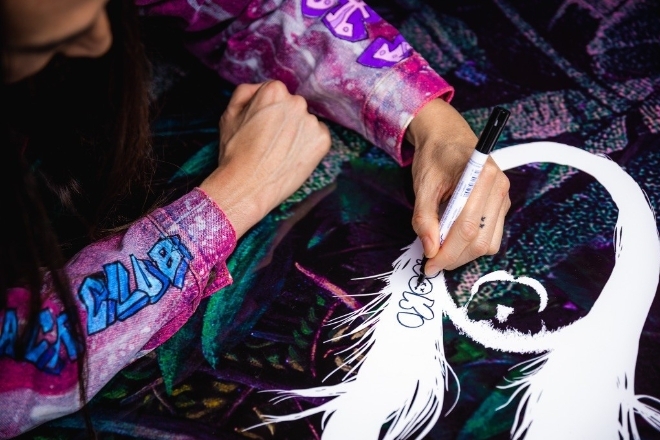 BMW apparently joined forces with Tomorrowland to launch the #UnitedInJoy campaign, creating a dedicated website for festival attendees to share their personal “Messages of Joy”. Several of those sentences then adorned the chromatic car wrap, adding onto the euphoric feel of the festival’s comeback after almost two years of slumber.

Aoki is notorious for expanding his reach outside the world of electronic music; his eclectic and ever-growing Dim Mak apparel label is just one of many testaments to his visually creative side. However, as tech becomes more and more fused with music, he continues to plant his flag in both territories and raking up the riches that come with it.

Earlier this year, he ventured into the world of Web3 and launched ‘A0KIVERSE’ as a “tokenized social club”. This was probably a follow-up to his successful run in the world of NFTs as well.

Read this next: How NFTs are shaking up the music industry — for the good of both fans and artists

“As music NFTs become more of a part of how we integrate and support artists, the labels will have to do more than just add the song on a playlist,” Aoki told Fortune in February.

The DJ mentioned that he gained more dollars in one NFT drop than he did via his six previous albums spanning 10 years of making music. No wonder he claims to be a firm believer in crypto.

So what’s next for this hyperactively creative individual? Whatever takes the cake, we guess.