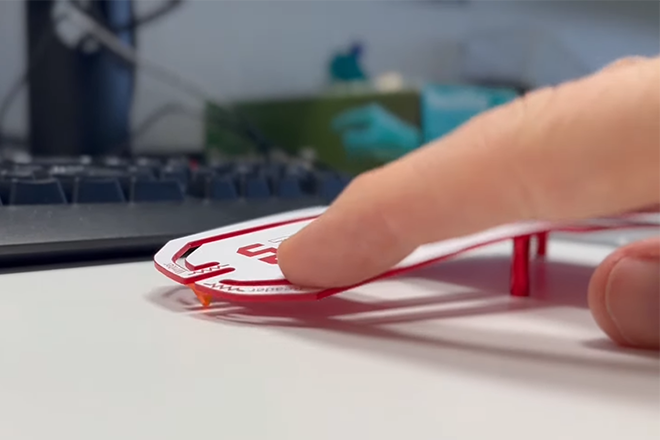 Scientists in Denmark have created the world’s smallest “vinyl” record, which is so tiny that it can barely be seen by the naked human eye.

Measuring just 15x15 micrometres, with grooves of a depth of just 65 nanometres – the tiny record plays 25 seconds of ‘Rockin’ Around The Christmas Tree’ in stereo, per EDM.

In a YouTube video demonstrating the making process, Postdoc Nolan Lassaline at DTU Physics at the Technical University of Denmark explained that the record was “so small that the entire thing we’re patterning can fit within one single groove of a regular vinyl record”.

It uses DTU Physics’s Nanofrazer Scholar 3D lithography system, and prints the grooves of the record into polymer film.

Professor Peter Nøggild explained that although they are unlikely to be mass-producing minute music anytime soon, the technology could be critical in future scientific research. He said: “While this record is of course a little bit of Christmas fun, it’s also a very serious exercise for something that is important to our research.

“While we make these kinds of grooves here with nanometre precision, we can transfer these to a number of other materials, where that will fundamentally allow us to manipulate material properties on a nanoscale,” he continued.

“We are doing something that we have never really been able to do in physics and material science before now.

“Another thing that also we would use this for is to make tiny magnetic field sensors that allows us to measure the currents in the brain, and for that we are hoping in the long term to create some affordable technology that would allow us to answer questions pertaining to Parkinson’s Disease and Alzheimer’s.”

DTU Physics’s work is not the only example of people experimenting with the decades-old technology of vinyl records. Last year (November 2022), two Korean artists created a record player that plays music from discarded plastic.