Two close friends who are bound by music perpetuated an idea that was more than likely conjured up by graceful amounts of sake. The friendly duo were hosting regular house parties that involved sake, good food, great friends — all encapsulated by a refined selection of music, it only made sense to them to transport those amicable vibes and make more friends in a space they could call their own.

The idea started rolling at the end of 2019, and I’m more than sure that over the last two and half years, Minh Anh Quach aka MAQman and Takayuki were probably relieved their idea didn’t pull through back then. They rode out the pandemic and fast forward to September 2022, Taka and MAQman launched Kanpai — a sake and sushi place modelled around a Japanese style listening bar.

Located in Saigon’s affluent and art-influenced area, District 2, Kanpai bellows out warmth, friendliness and quality all at once, all in sync. I got a chance to attend one of the nights during a string of opening get-togethers that took place in early September. Kanpai’s warm decor is accentuated by just about the entire place being made of cosmic-latte-coloured cedar while subdued lighting animates the squared space for raised levels of intimacy. And needless to say, the itamae and mixologist do everything in their might to leave your inhibitions at the door. Their magic certainly worked on me.

And the sound? MAQman, an avid collector, DJ and producer, set up vintage JBLs that are tucked into a modest vinyl wall, which he has filled from Justin Hurst aka Starchild's collection, who recently left Vietnam and was generous enough to let him borrow his records. In addition to the ‘now playing’ record sleeve shelf installed behind the booth, what struck me was how perfectly contained Kanpai’s sound output was given that they were nestled in a quiet neighbourhood.

I caught up with MAQman who spared a few minutes to let us find out a little bit more about Saigon’s newest and most graciously quiet music space. 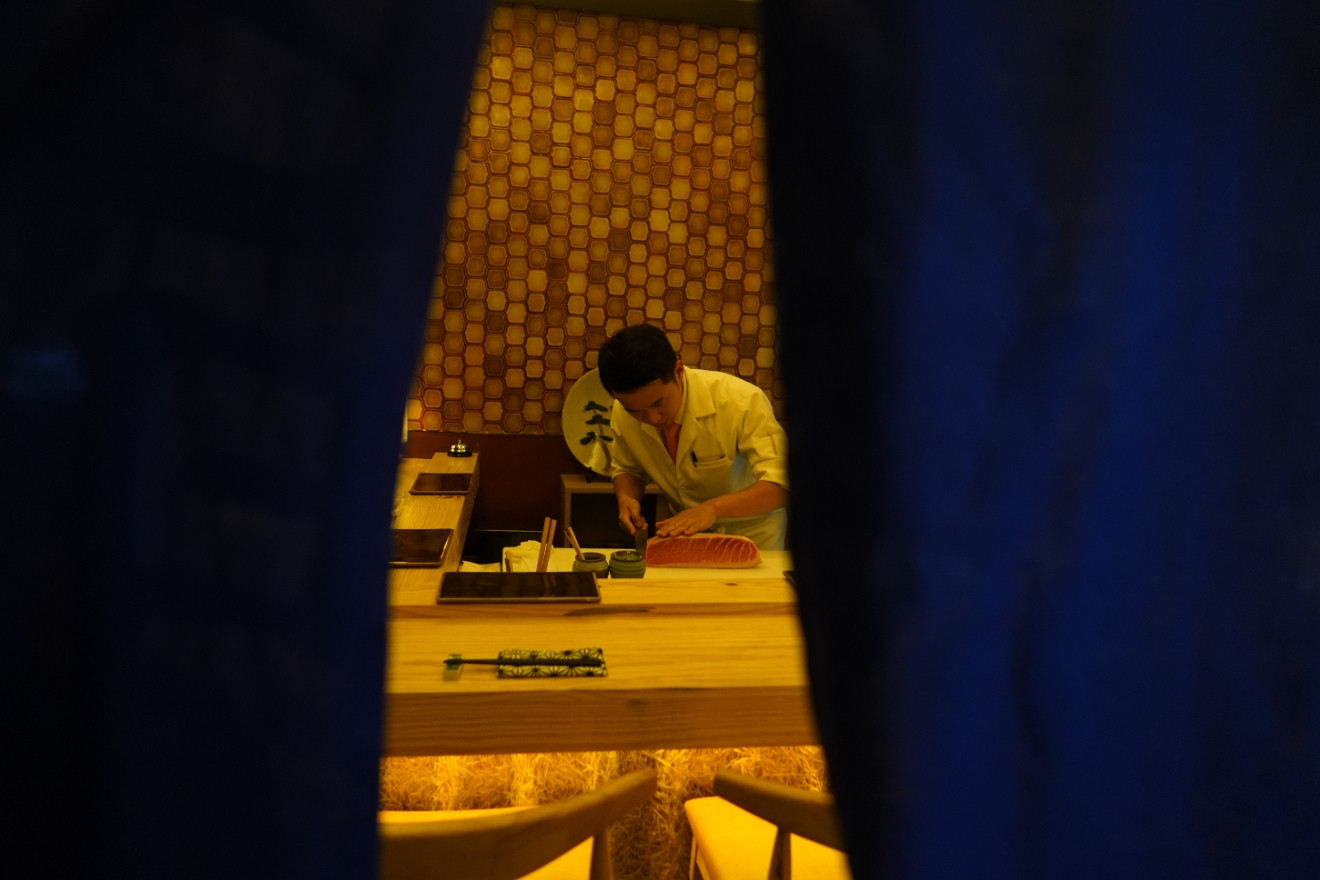 Where did the idea for Kanpai come from?

Taka and I are both vinyl records collectors who love to have a get together. Taka enjoys cooking food while I bring the drinks and play the records from his collection. Mine is still in Switzerland. After many parties, we started to talk about opening a business with a similar concept and vibe.

How did you and Taka meet?

I was a resident DJ at a venue he used to own.

Is the listening bar concept new for Vietnam?

We are not the very first one, but the concept is pretty new, yes.

How have guests reacted to the place so far?

Most of the guests have been very expressive and showed amazement by the overall concept and we are very thankful for that. The audio shelf is probably the most attractive feature for photo taking for the ‘gram, it seems. Some have said “the food alone is worth a visit”. The cocktail drinkers have praised the bartender's skills. Again, we are very happy about all this. 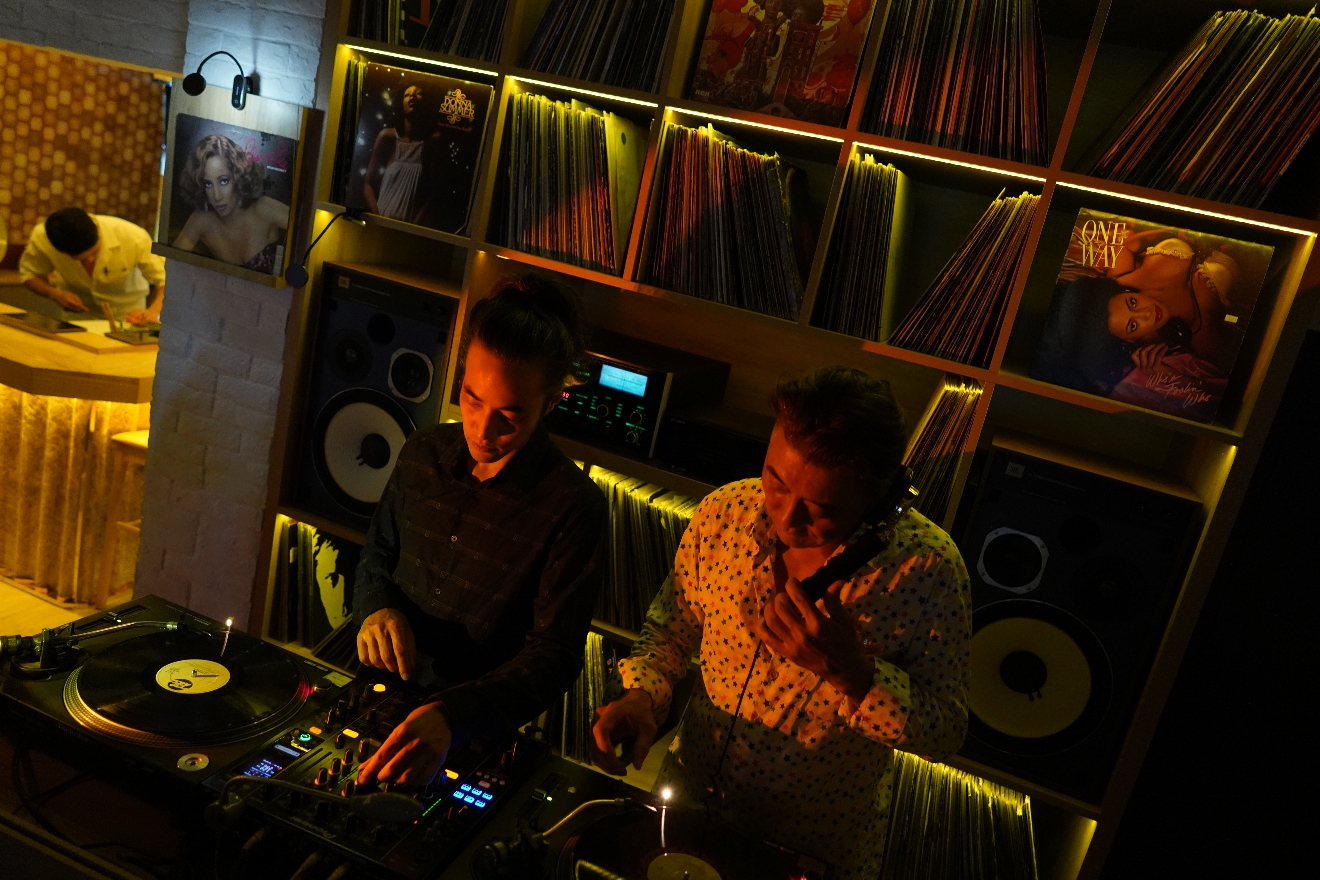 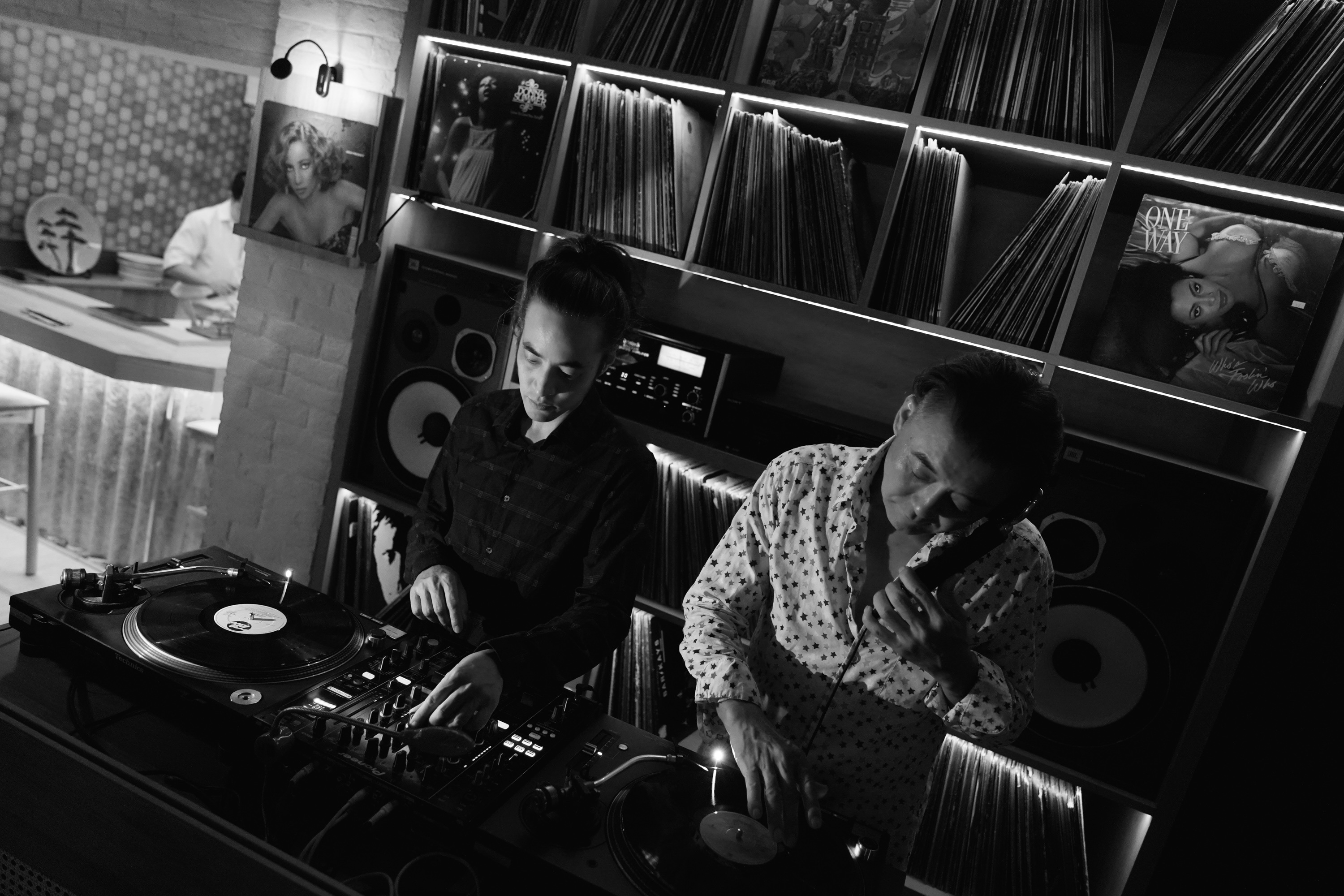 Will you have guest DJs coming to play at Kanpai?

We already had Alan Ritchie AKA Soul Jazz Funksters. And we will have others as well. It is essential for dynamics.

I noticed you display the sleeve of the record up on the wall while you’re playing it. Have guests taken notice of the music sharing message you’re putting out there?

Very few, but they have, yes. Some find it as a good idea, some get surprised by listening to the original song of something they know. They will then get interested in the cover and credits.

What’s the most cherished record in your collection at Kanpai?

Can you tell us about the gear and speakers you’ve used to kit out the space?

Taka brought a pair of JBL 4312 mk2 speakers and a Macintosh MX6800 amplifier. I added a Klipsch sub for warmth. The DJ equipment is a standard DJM and Technics SL1200mk2 decks set up, but we'd like to have a rotary mixer in the future. I treated the venue's room acoustic as much as I could. 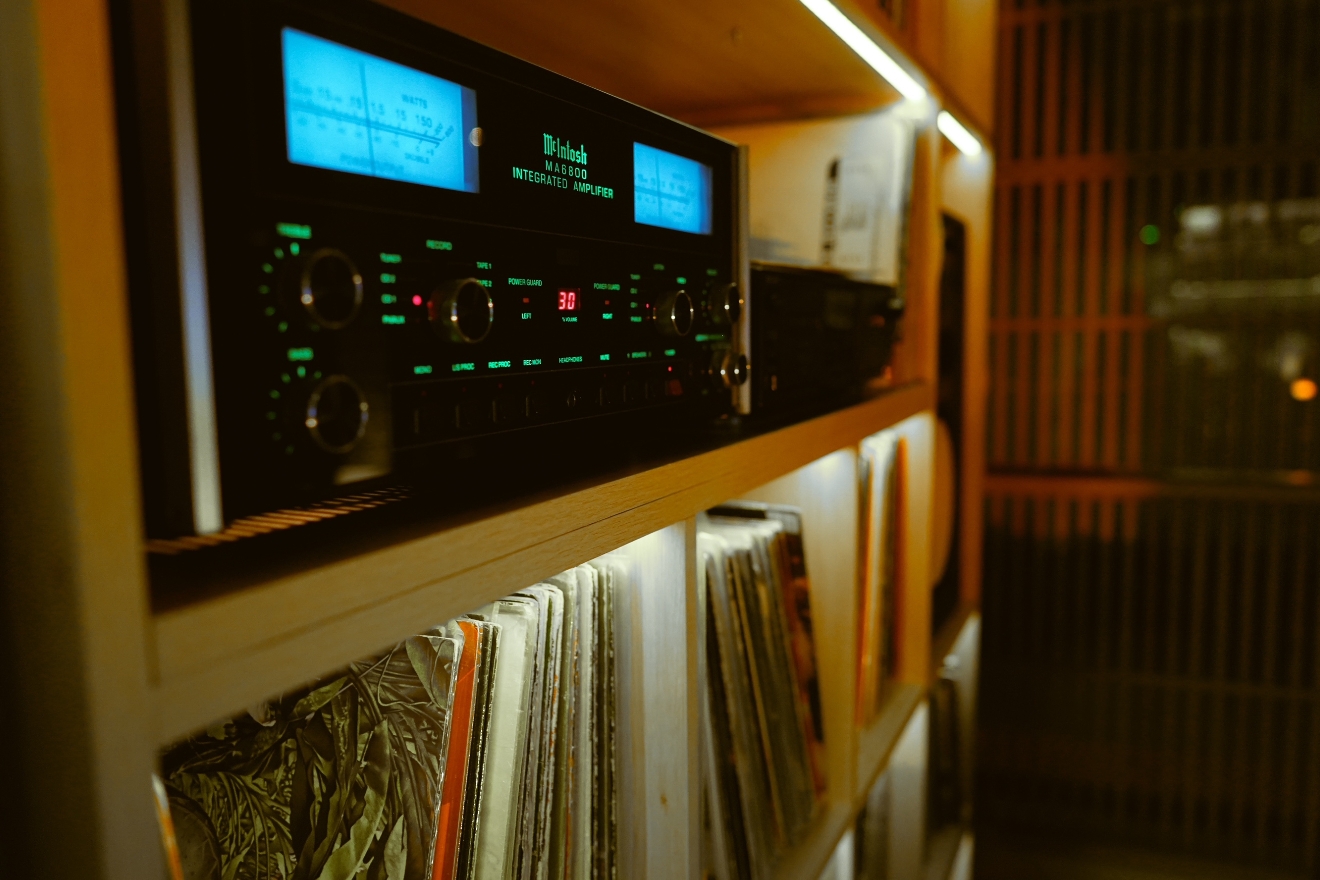 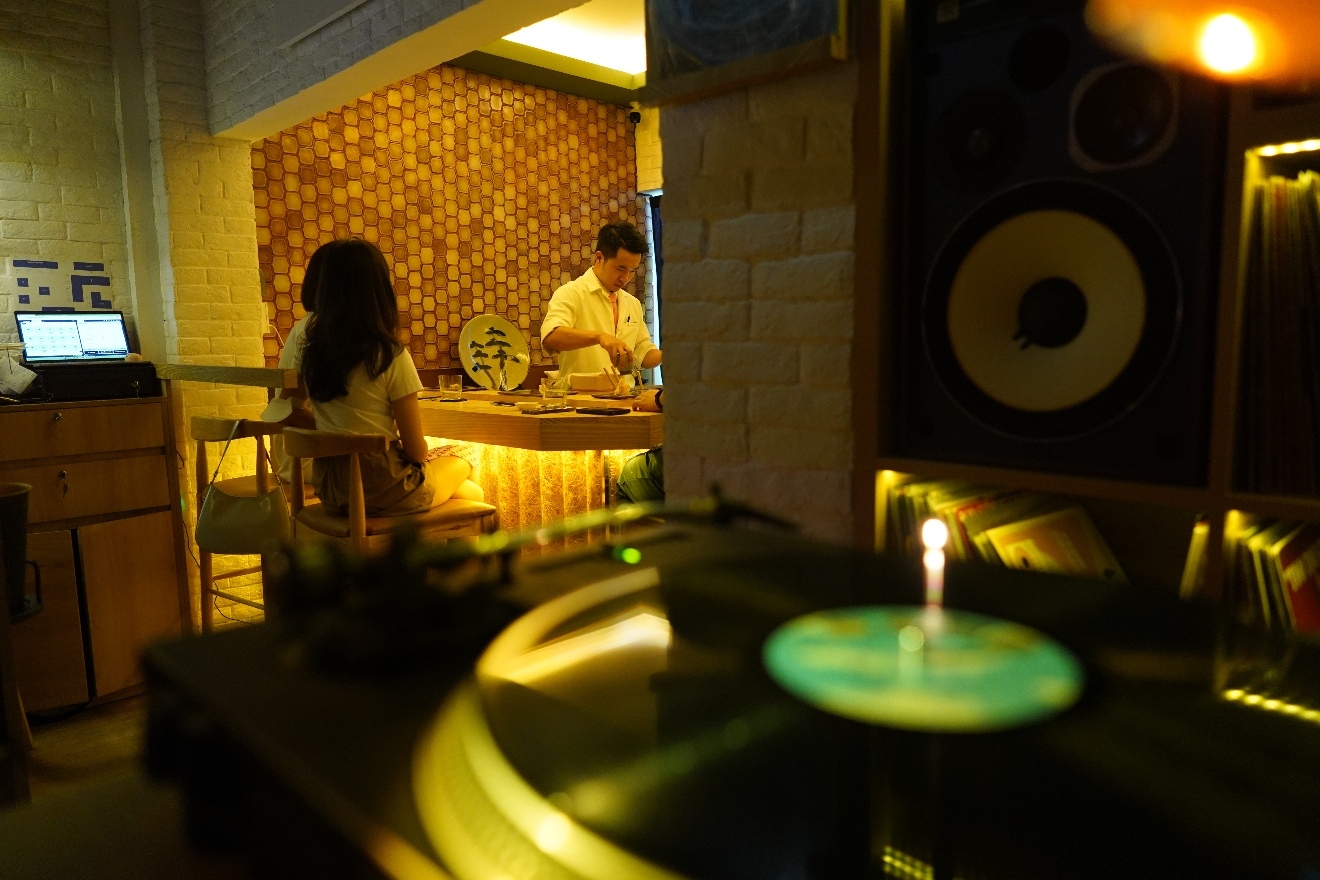 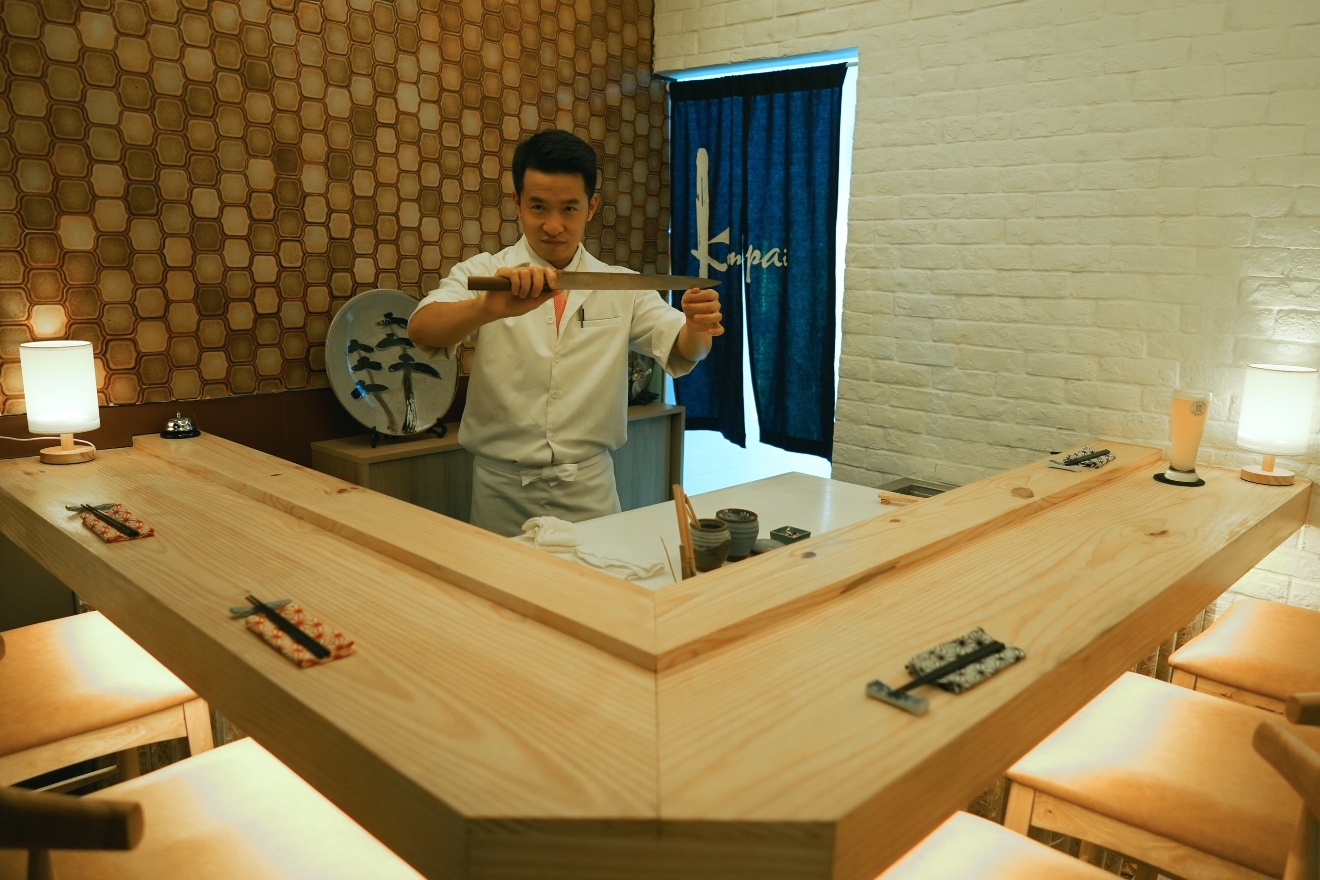 Let’s play musical omakase — surprise us with a track and sushi pairing?

It depends if it's on weekdays or weekends. Let's say "Sun Goddess" from Ramsey Lewis and Earth, Wind & Fire, released in 1974 from the same titled album. Combine this song with the king of sushi fish, our raw Bluefin tuna from Japan. Guaranteed to melt in your mouth and ooze your soul.

Which sake should we wash down that with?

Masumi Sake, which is our House Sake. It is smooth and not too dry nor too fruity. In our opinion, it is ideal for drinking on its own or to be paired with food.

Is Vietnam ready for vinyl and audiophile culture to grow?

Slowly, but yes it is. There are more and more places with that vinyl vintage concept opening. Record shops, cafes etc. The main issue is importing the records, which makes it an expensive hobby, to be a record collector in Vietnam.

*this article was updated on Monday, 24 October; paragraph 4