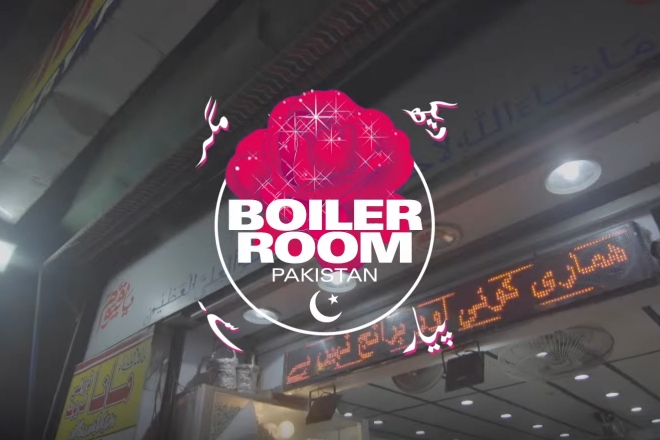 Early last week, the Boiler Room Instagram account was met with enthusiastic comments from Netizens responding to what seems to be an event teaser poster. “Boiler Room Pakistan” it read, adorned with a glistening rose above the white nation’s symbolic crescent and star, with the Urdu words “dekh magar pyaar se” spread out to each corner of the image. Translation: watch, but with love.

Fast-forward a couple of days and the official e-flyer gets posted. Boiler Room Pakistan was officially announced. Presenting a line-up that showcases the country’s native heritage of live performance and top names in dance music, the event debuted online on June 20, 2022, starting 7pm local time. 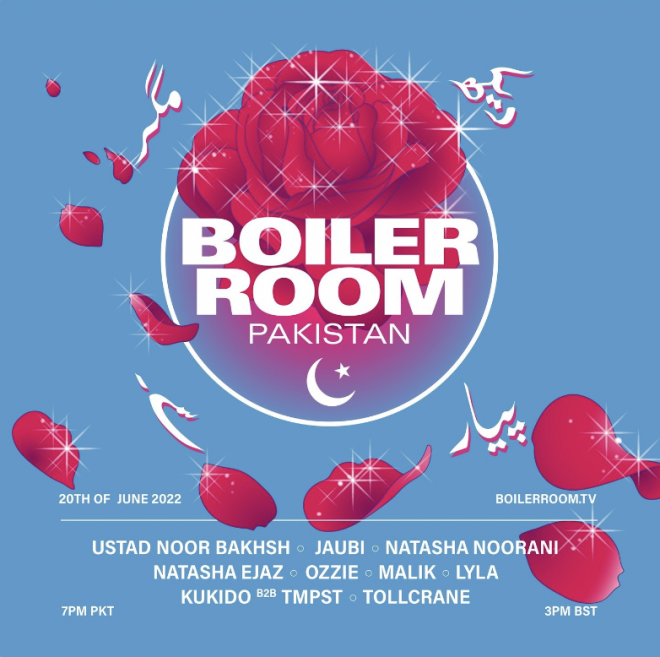 As with previous Boiler Room programmes, the performances were recorded prior to the Monday night stream. Filmed in Karachi, the sessions were a collaborative effort put together by the British Council, Dialled In, Karachi Community Radio, and Cape Monze Records, a Karachi-based label specifically spotlighting indie and electronic music.

The stream started off by showcasing a line-up of musicians that represent traditional Pakistani music. Ustad Noor Bakhsh displayed his impressive skill in playing the Balochi benjo, followed by a performance from the Lahore-based quartet Jaubi and the elaborate sounds of their qawwali instruments. Both Natasha Noorani and Natasha Ejaz effortlessly demanded attention with their stellar singing abilities, as they expertly fiddle with their minimalist setup on stage.

As the stream continued, the atmosphere then shifted to shine the spotlight on the local dance floor stalwarts. Ozzie starts off the DJ line-up with his breakbeat-heavy set, followed by MALIK who glides through a number of crowd-hyping genres in his energetic performance.

Next up is Lyla, who displays her apt for compiling jaunty house tunes. As the night went on, the funk-filled techno-infused set from Kukido b2b TMPST and Tollcrane’s chaotically hypnotic song selection permeated the dance floor, ending the stream on a high note.

Read this next: Lapgan dishes out 21 tracks of beats & samples via Pakistan’s Lollywood

In line with the first-ever Boiler Room broadcast out of the country, a limited edition t-shirt has been released to help gather funds for Karachi Community Radio. Considered a fundamental establishment for aspiring musicians in the country, they are in need of audio and recording equipment which is hard to come by in Pakistan. Adorning the t-shirt’s front left side is the event’s logo, with an enlarged version emblazoning the entire back.

Watch all the sessions from Boiler Room: Pakistan here.