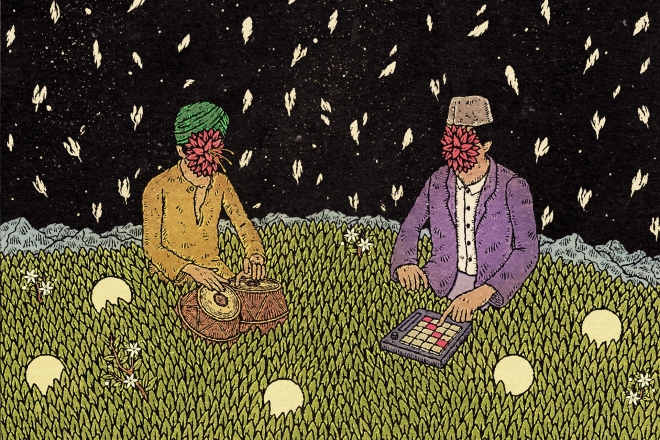 I’ve been knocking back doses of musical offerings from the South Asian diaspora, and I have no intention to hold back on my appetite anytime soon.

This time, we dig into unfamiliar sounds from Lollywood — Lahore, or Pakistan’s, film industry, by way of Chicago-based artists Lapgan.

Lapgan is a Indian beat-maker based out of Chicago, and his interests are piqued by existentialism and universality, while also getting his kicks from beats and classic Bollywood. ‘Duniya Kya Hai’, which loosely translates to ‘What is this World?’, is a 21-track beat-tape, and is the fourth release in the X-Series by Mauritius-based creative agency and label, electrocaïne.

Although we set out to premiere one song of the 21-track mixtape, ‘Holy’ vibrantly nests amongst the rest of the spicy mix. Just add some chutney and you’re ready to go.

There’s some deep and historical thought behind Lapgan's foray into Lollywood. With ‘Duniya Kya Hai’, his imagination attempts to create a world where the lands around the boarder between India and Pakistan would have no conflict, where people would coexist peacefully and in turn, amalgamate their shared cultures and pursuit of harmony.

That imagination was driven by a simple historic fact however — during the times of military conflict over the Kashmiri partition, officials would dispose or ban the country’s films and media. Since the 60s and 70s, films were the primary source and place for music in India and Pakistan. There’s shared language between Urdu and Hindi as well. Lapgan’s attempt with his Lolly-beat-mixtape can be characterised by his understanding of the past to what he dreams of in the future.