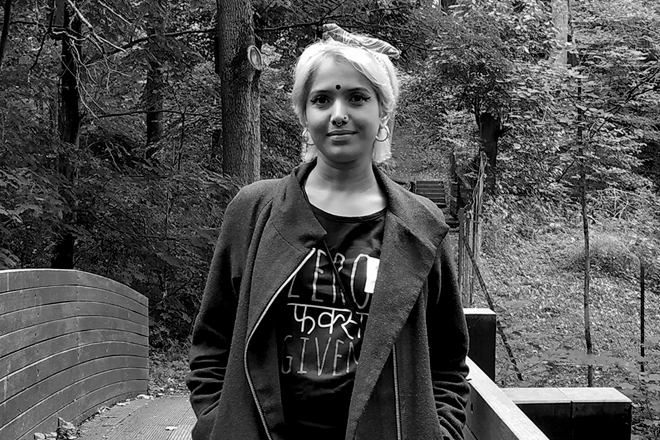 Pooja B’s journey has taken her exactly where she wants to be — she’s carved and steered her trajectory as a DJ by a natural flight of desire, which took off in the Chennai scene through commercial sounds in 2009, and by way of Dubai, eventually landed in Berlin.

Speaking to Mixmag Asia, Pooja Bangad explains her rise in music, “As a girl DJing in India back then, there wasn’t really an avenue to do much else. Over the years, my flight attendant job allowed me to explore nightlife all over the world and I was inspired to bring back and play this music that I discovered. A turning point was my first trip to Berlin in 2016, and my sound has more less been rooted in driving techno & some industrial-ish sounding stuff since.”

Read this next: Listen while helping: Pooja B curates a global Indian compilation 'We The People'

Once she found her footing in Berlin, Pooja only looked forward, towards an industrial side of things that warmed her heart, in her own righteous space of Ikigai — Pooja affirms, "I’m a four-to-the-floor techno slut most times".

ikigai also happens to be her production alias, whereby her raison d’etre is to make people dance. ikigai’s releases can be found on Sonata Music, Underdub Records, Fabrik Music, SMR Underground, Fehlr Musik, 22.2 as well as three self-released outputs on her Bandcamp.

“I recently completed a year of living in Berlin”, continues Pooja, “and I've been reflecting on how dance floors post-pandemic demanded a certain amount of rage and how that affected my sound, but hypnotic trippy stuff is really what resonates with me the most. I've tried to capture that range of sound in this mix.”

Through her music, ikigai expresses her firm stance against core humanitarian issues such as racism and sexism, whilst fighting for environmental issues too. Her sense of activism sounds futuristic with awareness of a brooding Dystopia — but while a dark club that bathes in industrial sounds is where Pooja, and ikigai, find their sentiments of home sweet home, needless to say Pooja’s tacticity behind the decks allows her to be an adaptive artist no matter her environment.

Read this next: Daytimers announce 2nd compilation to raise funds for India

Successful music-backed projects like the 'We The People' COVID relief fundraiser compilation that Pooja curated, and her co-founding The EQ Way collective in India which led to setting The EQ Way radio show on Flux Music in Berlin, are just a few bits of living proof of her efforts at gathering artist-focused community for great and greater causes.

When asked about what inspired her to do this mix, Pooja responded, “I wanted to project all the things close to my heart right in this mix. I've used tracks by Ukrainian artists, labels and compilations which support humanitarian work; an inclusive mix with tracks from producers who identify as women, POC or are part of the LGBTQ community along with other favourites."

Tune in to Mixmag Asia Radio 095 with Pooja B from Berlin by hitting play below.