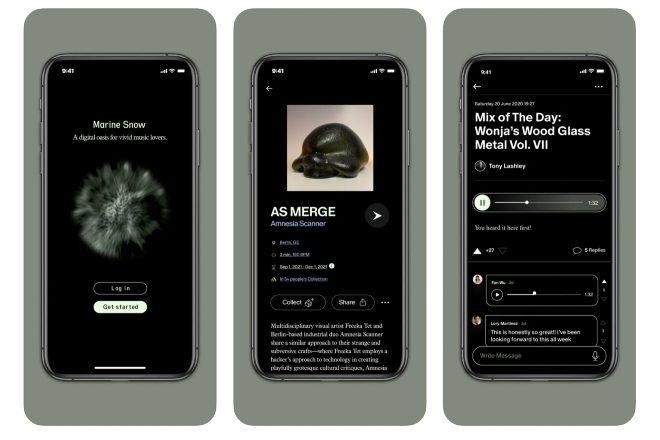 Marine Snow, a new music streaming platform, is introducing a gamified method to music discovery — as well as a system that compensates musicians the equivalent of "500,000 Spotify plays" upfront.

The app, which is available for free on the App Store, features a 90-day cycle of unique tracks. This concept enables the platform to pay contributing artists a set fee regardless of the number of streams they receive.

Marine Snow went live on June 2 but has been running a beta version of the app since September 2021.

Read this next: Bandcamp could see delayed payments to artists over court battle to keep Android payment system

Music by Oliver Coates, Amnesia Scanner, ABADIR, Palmistry, and others is now available on the app. Previously, there was music from DJ Earl as well as a collaborative piece from AceMo and DJ SWISHA.

Explaining how the fees and payment system works on the streaming app, founder Tony Lashley told RA: "The median artist we are working with receives about 100,000 streams on their median song on Spotify over the lifetime of the song, meaning that for 90 days we are paying 2.5x the lifetime revenue of their median song.

"This multiple is even higher for artists in the Global South and the developing world, where per-stream rates are normally lower.

"A local artist in Indonesia for example is making 14x in 90 days what they would make over the lifetime of their median song on other platforms."

Read this next: DVS1 launches service that will see producers paid for DJ set plays

The platform also lets users collect ‘capsules’ that contain a random track and collect ‘gem shards’ by reading song blurbs and listening to music. These 'gem shards' can then be combined to make new capsules in order to keep the reward cycle flowing.

There's also a search option, but you have to know what you're looking for, as the app emphasizes. Users can interact with one another in the Roundtable area and win awards in the process.

Lashley also spoke about the social element of the app, saying: "We go to concerts to feel a sense of kinship with others, to affirm our identities, and witness moments of greatness, yet today’s music streaming services capture none of that magic."

The app plans to offer a "gift shop" and "auction house" for songs that reach the 90-day mark in the future, allowing musicians to sell their tunes as downloaded editions and one-of-a-kind NFT - embracing the famous Web3 trend, which is being adopted by big labels and artists all over the world.

Read this next: SoundCloud has bought AI tech startup Musiio