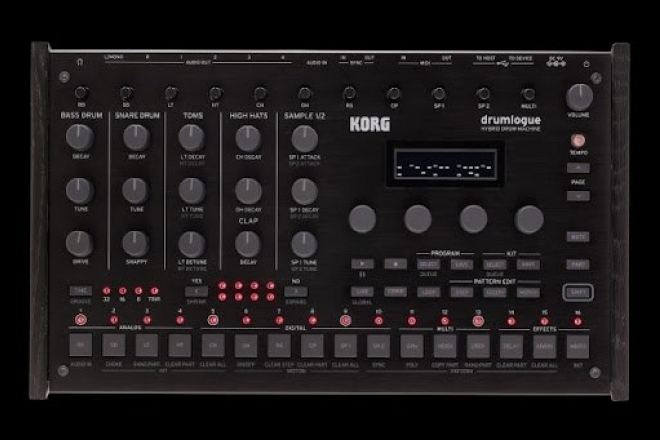 Korg has finally unveiled its new hybrid drum machine, the Drumlogue, which also doubles as a synth.

The long-awaited music gear flaunts a bit of everything, from its analog drums to digital synths, and has been marketed as the “first analog/digital hybrid” from Korg.

The Drumlogue was created by Korg engineer Junichi Ikeuchi, and is said to feature “completely new analogue circuitry” with new circuits for bass, snare, and low and high tom drums.

The new gear from Korg features seven new digital parts - six of which are sample-based and one multi-engine. Pre-loaded PCM samples and user-downloaded samples can be imported onto the Drumlogue, which can be done by connecting the drum machine to a PC through USB connection.

First announced more than a year ago, Korg’s Drumlogue was finally unveiled for the first time in photos and a range of demo sounds last week on September 15.

The multi-engine addition previously used on gear including Korg’s Minilogue XD reappears on the Drumlogue, and is said to be “even more powerful”.

Read this next: Eurorack synth manufacturer Hexinverter to close in 2023 due to global supply issues

The Drumlogue also doubles as a synthesiser and adds custom synth voices along with built-in filters, LFOs and MIDI-controlled polyphony.

The Drumlogue will be available by the end of the year, according to Korg, priced at US$599. Find out more about the hybrid drum machine here.