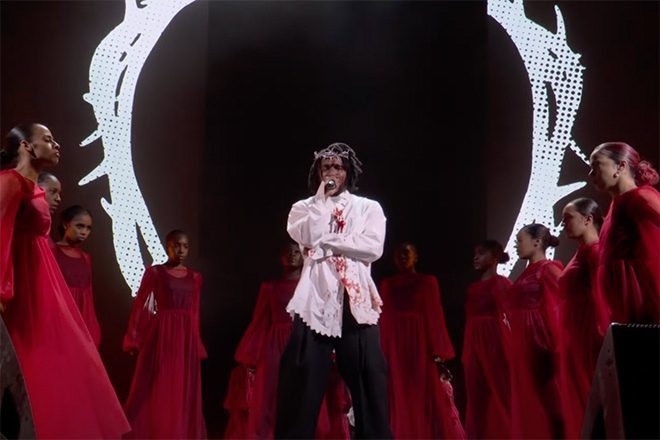 Kendrick Lamar headlines the last night of Glastonbury ending with a women’s right chant in reference to US abortion rights.

Wearing a diamond encrusted crown of thorns with blood pouring down his face, Lamar repeated: "Godspeed for women's rights. They judge you, they judge Christ."

Each time the rapper repeated the line he would add more volume until he eventually stopped mid-sentence and threw the microphone before walking off stage.

Read this next: New print celebrates seminal hip hop albums from the past 40 years

Lamar’s chant was referring to the US Supreme Court recent ruling that there shall no longer be a constitutional right to have an abortion in the United States, therefore overruling the nearly 50-years-old Roe v Wade case.

Since this ruling, multiple states such as Utah have accepted the ban on abortion with others such as Washington D.C. declaring itself as “a pro-choice city”.

This news has caused many artists not just Lamar speak out whilst at Glastonbury including Billie Eilish, Lorde and Phoebe Bridgers also publicly speaking on abortion laws.

On Saturday night at Glastonbury, pop star Olivia Rodrigo brought out Lily Allen to perform her hit ‘Fuck You’ in response to the Supreme Court’s decision.

In Lamar's headlining performance he also mentioned themes of social injustice, faith, greed, loyalty and prejudice with his choreography whilst performing tracks from his new album ‘Mr. Morale & the Big Steppers’ including ‘N95’ and ‘United in Grief’ as well as some of his past classics, ‘Humble’ and ‘Swimming Pools (Drank)’.

The dramatic blood began to pour down his face moments before his chant. His crown of thorns that features on the cover art of ‘Mr. Morale & the Big Steppers’ is said by British Vogue to have been made by Tiffany and Co and features 8,000 diamonds.