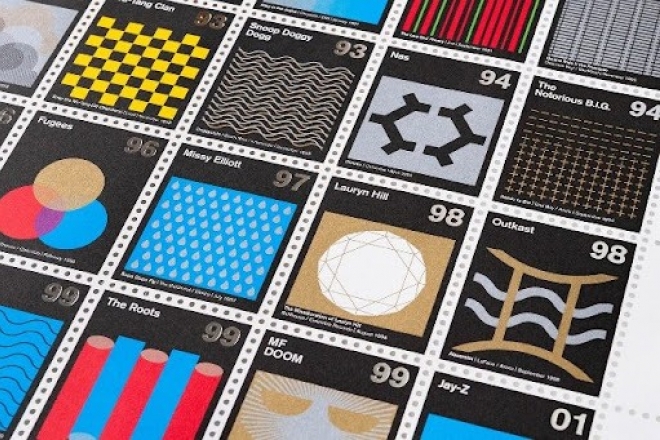 A new "stamp card" print celebrates over 40 seminal hip hop albums from 1982 right up to 2020 by featuring a stamp commemorating each one, the artist it is by and the year that it was released.

Made by UK-based Creative studio Dorothy, these prints are "like a mini hip hop history lesson" which highlights the vast history and range that the genre has.

Read this next: 20 of the best early-90s hip hop samples

There are 42 stamps which make up the stamp card, all of which display the date of release, the label it was released on and its running time. The artwork on each of the stamps is either inspired by the original album or by one of the tracks featured on it.

'The Message' by Grandmaster Flash and The Furious Five, released in 1982, serves as the opening stamp. Other classics albums featured in this print include Run-1984 DMC's self-titled album, 'Paid in Ful'l by Eric B. & Rakim, Public Enemy's 'It Takes a Nation of Millions to Hold Us Back', De La Soul's '3 Feet High & Rising', the Beastie Boys' 'Paul's Boutique', and A Tribe Called Quest's 'The Low End Theory'.

The albums of some of the biggest hip-hop icons who have shaped the way we view the genre feature on this print too, including Missy Elliott, Lauryn Hill and Snoop Dogg.

Read this next: Beyoncé’s new single features a sample from Robin S.’ ‘Show Me Love’

Also on this print is music by stars who rose to fame in the 20th century; from Kanye West, to Eminem, to Kendrick Lamar.

The prints, which are 80 cm x 60 cm in size are litho printed in six unique colours and include an extra silver foil that resembles a perforation.

These prints are part of Dorothy's Stamp Collection, which is a series of prints paying tribute to seminal pieces of work from different genres, from post-punk to electronic.

Read this next: Louis Theroux says his children think his ‘Jiggle Jiggle’ rap song is “cringe”

You can buy the hip hop "stamp card" print here.