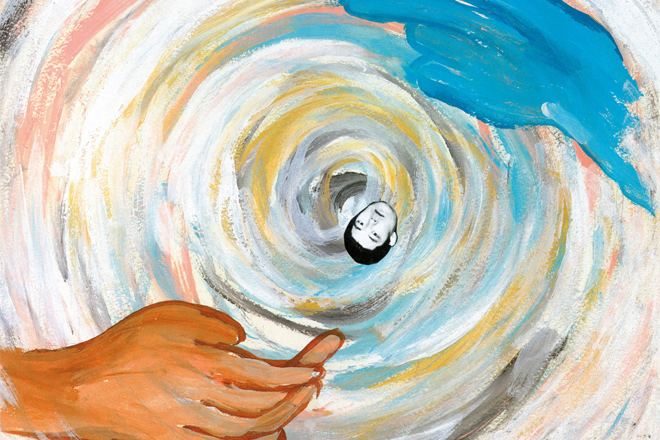 Mule Musiq has been doing the work of music archaeologists. Their latest excavation is a reissue of taiko drum master Eitetsu Hayashi (林英哲)’s EP ‘Kaze No Shisha’ (風の使者). Originally released in 1983 on the Japanese subsidiary of Victor, the EP consists of six compositions that were recorded in Tokyo at Sunrise Studio and Victor Aoyama Studio. The hypnotic, trance-like rhythms and timbres of taiko, koto, piano, gayageum zither, janggu, marimba and synths weave in and out of each other, creating complex, unearthly layers of folk melancholia. The record captures the dramatic air of a theatrical performance; in the dynamic and emotive trajectory of each recording, there is a sense of drama, a sense of a myth. After all, the taiko discipline is rooted in Japanese folklore and religious traditions.

Eitetsu Hayashi is one of taiko’s most prominent names: he was an essential part of the internationally renowned taiko drumming troupes Ondekoza (鬼太鼓座) ("demon drum group") and Kodō (鼓童) — he joined the first and led the latter; he was the first taiko performer at Carnegie Hall; he’s played with the American Symphony Orchestra, the Berlin Philharmonic and the Boston Symphony Orchestra, and he’s won awards from Japan’s Ministry of Education and Japan Art Foundation. Free jazz pianists and contemporary composers alike have written music for Hayashi to stage and perform on the taiko.

Shortly after forming Kodō in 1981, Hayashi left the group to launch his own solo career. ‘Kaze No Shisha’ (Messenger of the Wind) was his first release. He’s known for pioneering the O-Daiko solo style, which — birthed during his Ondekoza days — narrowed the spotlight to one performer, backed by minimal percussion. His pool of inspiration is diverse: photographer Man Ray, 18th-century painter Ito Jakuchu, printmaker Léonard Tsuguharu Foujita, nature. While it is understood that the taiko drum has been in Japan as early as the 6th century and has been employed historically for incoming storm warnings, war signals, religious ceremonies, etc., he reminds us that kumi-daiko (group drumming) is not an old tradition. Kumi-daiko was established formally after WWII, and Hayashi’s work with Ondekoza and Kodō were further evolutions of that. Wadaiko is what it’s called.

In the similar spirit of revival and renewal, a lot of wamono (vintage Japanese groove music) from the 70s and 80s have also been excavated recently. Surely, though, danceable music — funk, disco, pop — must have entered the mainstream more easily than taiko music. But the era of the Japanese economic miracle had a lot of room for creative experimentation...so Hiyashi was invited to perform at unusual places outside of the theatre: temples, shrine grounds, in front of the Great Buddha of Kamakura, for example.

In an interview with The Japan Foundation, Eitetsu Hayashi reflects on his consistent and intentional desire to continue experimenting: “Being a taiko drummer requires physical capacity close to that of an athlete, but taiko is not an area where success is measured in terms of minutes and seconds. Artistic expression is not measured in numbers, such as how many decibels your sound used to be and how many it is now. Since this is something that I began, there are no predecessors to be compared with as in the traditional arts, and although I have apprentices of sorts, they will decide their own futures and the future of their art. As for myself, I am still at this age trying to do things that no one has done before, using myself as an experiment, so to speak.”

Mule Musiq's opened a new hi-fi listening bar in Shibuya Studio Mule last year, and has been consistently proving themselves to be standard-bearers for the underground scene.