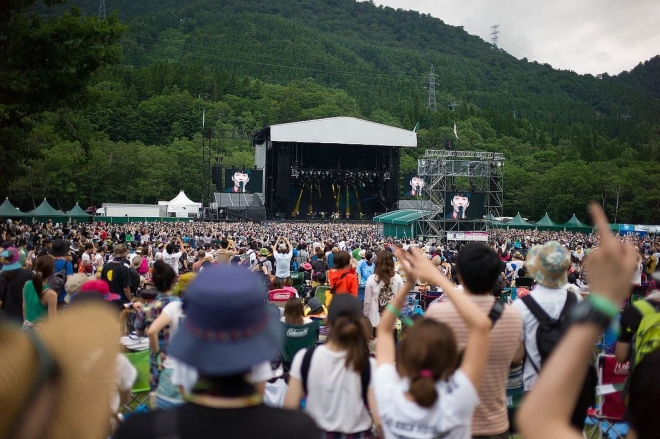 Japan’s biggest outdoor music festival is planning to kick off its three-day festivities once more this summer. Scheduled for the last weekend of July, Fuji Rock Festival recently announced its first phase line-up of performers, which now includes international artists.

The headliners that have been published are Vampire Weekend, Jack White, Halsey and Tom Misch. Prominent names in dance music continue to make the list – Bonobo, Mura Masa and Jonas Blue being the ones announced so far. Representing the region of Asia, Night Tempo and D.A.N. are sure to bring forth their electronic music virtuosity on stage. Altın Gün, Bloodywood and The HU who will also perform on behalf of Turkey, India and Mongolia respectively.

Fuji Rock Festival has boasted a number of top-notch names across all music genres that have graced its seven stages since it first came out in 1997. It also never forgets to spotlight the appeal of electronic music through the previous performances of The Chemical Brothers, Chvrches, Aphex Twin, The Prodigy, Skrillex, Röyksopp and Fatboy Slim to name a few.

Read this next: Nintendo's old HQ in Kyoto is now the Marufukuro hotel designed by Tadao Ando

After being called off in 2020 due to the pandemic, Smash Japan – the festival’s organiser – managed to carry out an all-local line-up event in late August of 2021. With an attendance of roughly 35,000 people, this was a far cry from the previous 130,000 large audience in 2019 – before COVID-19 restrictions, needless to say.

Advance tickets ranging from around US$156 to US$360 are already up for grabs on Fuji Rock Festival’s official website. They’ve been known to sell out notably fast in past years, and are most likely expected to do so this time around as more names fill up the roster.

Located at Naeba Ski Resort in the Niigata prefecture, Fuji Rock Festival’s grounds are a haven for music, nature and camping lovers alike. Its comeback is hoped to revive tourism activity in the region known for its breathtaking landscape, year-round hot springs and skiing activities in winter.

Though travel restrictions for tourists are still in place during the time this article was written, it’s been forecasted that Japan will undergo a gradual reopening towards tourism starting mid 2022. Fingers crossed.

In the meantime, keep an eye out for more performers to be announced here.