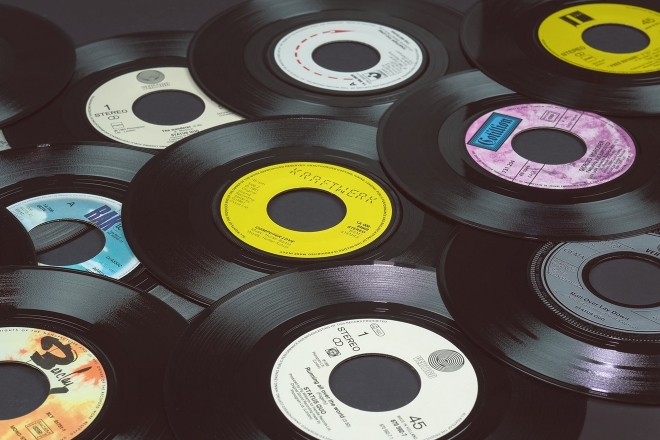 We always think about what the future will look like; but while you were thinking, the future already arrived. Civilians are headed for the moon and Mars isn’t too far behind, the Metaverse is here and the digital world is wild (that’s in equal parts good and very, very bad), and the planet is, according to scientists, doomed. But a couple of smart people are innovating and doomsday might be somewhat mitigated by all the lovely people who are instead focusing on Earth Day. Today we’re referring to the team at Evolution Music, who have just unveiled what they are calling their flagship product: a bioplastic vinyl record.

What is being touted as the world’s first-ever bioplastic LP, the vinyl claims to be a sustainable and low impact solution to the toxic impacts of producing PVC vinyl, which Greenpeace called “the most environmentally damaging plastic”. PVC, or polyvinyl chloride, is the common material that records are made from and has a pretty bad wrap for producing an enormous amount of wasteful pollutants being that production is fossil fuel-based.

The Guardian did a deep dive into the environmental impact of vinyl, referring to records themselves as relics since the technological principles of record pressing have not changed for a century, a time when we didn’t yet know how badly we were fucking up our planet with the speed at which humans were inventing and innovating. Interestingly, more than half of the PVC used by record manufacturers in the US comes Asia, Bangkok to be specific. And with the vinyl industry seeing a huge revival in sales and global production sitting at around 180 million LPs a year, which equates to 30,000 tonnes of PVC a year according to Evolution Music, it’s about time someone came up with an environmentally friendly alternative.

That said, vinyl records are much loved for their superior sound quality, and audio aficionados will raise an eyebrow at their bioplastic successor until they are sold on performance. But according to test runs by the National Physical Laboratory, there is no sacrificing the kind of sound quality that we love its legacy version for. In fact, the bioplastic record is said to elevat the listening experience thanks to its “improved anti-static properties”.

Marc Carey of Evolution Music said, "We see this product as the first in a new wave of solutions that will help to address some of the most important issues of our time. Having support and advocacy from leaders in the music industry, particularly those at the forefront tackling environmental and social issues, proves there’s a serious demand to move things forward, to turn around the huge impacts of the music industry, and quickly."

Read this next: Jack White calls out major labels to press vinyl in their own plants

Peter Quicke of Ninja Tunes and the AIM Climate Action Group adds: “Vinyl is such an important part of our experience of music, it’s brilliant (and a relief to be honest!) that we now have a non-toxic and sustainable solution to pressing records...”

The project was announced during Music Declares Emergency’s Turn Up The Volume Week 2022, an annual weeklong initiative meant to enhance the music industry's sustainability credentials. The 2022 edition ran from April 18 to 24. The first LP is expected to launch this summer following a crowdfunding initiative and hopes to use circular economy principles to replace the harmful production and use of single-use plastics and minimise waste in the music industry.

“We make it easy for labels and artists to make the change by producing bioplastic LPs (instead of PVC) using the record pressing plants’ existing machinery and production processes,” reads a statement on their website.

Read this next: Above & Beyond have cinematically scored climate documentary The Last Glaciers