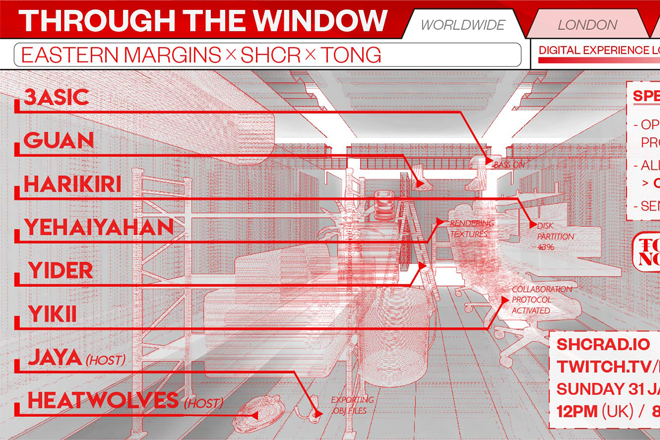 Eastern Margins is starting the year with ambition. The London-based collective/label has teamed up with Shanghai Community Radio for a highly experimental, communal music production session that will be livestreamed via SHCR’s Twitch channel at the end of January. The ambition is unsurprising: the Eastern Margins collective have been throwing parties since 2017, releasing music since early 2020, and has never strayed a step away from their devotion to the underground communities in the margins of East and Southeast Asia.

On January 31, hosts Heatwolves 热浪 and Jaya will be chatting to six artists across China and the diaspora about their creative processes. The label has also extended the invite to you, to participate in this radical, experimental collaboration by contributing suggestions and samples. The event page states that due to technical constraints regarding time zones and China’s internet firewall, it is much easier to join the production session if you are based in China. It’s true—there is a new, giant wave of bold and uncompromising artists in China’s underground music scene.

Who are the artists involved? There’s 3ASiC, a Shenzhen-based producer and sound designer who has produced work for Native Instruments in China. There’s Shanghai-based vocalist and producer Yehaiyahan, whose iconic and eternal metamorphosis we’ve covered last year. There’s Chengdu-based HARIKIRI, who is considered one of the founders of China's current wave of rap music and boasts production credits for music by Higher Brothers, Bohan Phoenix, MC Hotdog and more. There’s experimental electronic artist YIKII, known for her juxtaposition of an angelic falsetto and heavier, more jarring production. There’s also Mongolia-raised, Beijing-based Yider who blends Eastern poetry with psychedelic electronic music, and co-founded Nomad City Records. Lastly, there is Hangzhou-based producer GUAN, who mixes the aesthetics of punk with techno and synth music.

And what exactly does open-sourced, decentralized music sound like? What were the goals behind the project? We reached out to Eastern Margins founder David Zhou (Lumi) and Stefan Nigam (ST三F) with hopes to fill our book margins with their reflections.

Mixmag Asia: What inspired this event, specifically for it to be communal and open-sourced? Did the idea come together from all the artists involved?

Lumi: The last ~12 months have really made it clear to us how creative communities are more collaborative and interdependent than ever before. The circumstances have really galvanized us into experimenting to overcome the restrictions on live events - and try to connect with our community through any means possible.

We’ve been super inspired by other initiatives across Asia — China really set the blueprint for livestream experimentation at the start of the pandemic, so it's fitting that this event has a focus on China. Likewise — more recently Senyawa’s decentralised album and Tohji's Goku Vibes remix experiment have been inspirational in validating new, experimental paradigms for music distribution and experimentation.

ST三F: From our Eastern Margins Ceremonies live-stream series, we’ve really seen first hand how the experimental music scene and community we operate in is a really global one, operating at the hyper-local and hyper-global levels, whether you’re based in London, Shanghai, or New York.

To build in this vein, and to push the boundaries of the degrees of collaboration we can achieve through a live-streamed event, we reached out to our friends at Shanghai Community Radio (SHCR) and came up with the concept of Through the Window - a world of possibilities we can see. We wanted to explore the future possibilities of truly global cultural and musical collaboration, and by that token wanted the project to be communal and open-sourced to ensure the conversation is as diverse and informed as possible.

We’re really lucky that we’ve had collaborators, SHCR and TONG, who understood the vision and wanted to similarly push into the Margins and make a unique contribution to the cross-cultural soundwaves between China and the world.

What does an "open-sourced, decentralized" piece of music mean? What was the goal of the event?

Lumi: We wanted to draw on the ethos of open-source software - development through open collaboration, with a framework that's open and transparent to anyone anywhere. We want participants to explore the mindset that music can be made openly available for others to build on. With the decentralised component, we want to encourage the idea that music is not always bound up in moments of individual creativity, but is rather often the result of a community.

ST三F: Our hope for the event is to explore the possibilities of truly global and limitless cultural collaboration with the help of incredible artists and creatives from China and the diaspora, including 3ASiC, GUAN, HARIKIRI, Yehaiyahan, Yider and YIKII, who form the core team kicking off the process.

During the event, our artists will take turns producing segments of music which will feed into an overall piece. The only direction that has been provided is the theme, ‘Through the Window’ and a limited music sample pack - the rest is completely in the hands of the producers and the creative suggestions of the audience.

The entire production process will be livestreamed and so we hope this will be a great opportunity for our audience to meet some incredible creatives, understand their process and be inspired to collaborate as well. After the event, we plan to make the finished music publicly available for future participants to continue the contribution.

Is the electronic music scene in China (both artist and audience) open to experimental events/collaborations like this?

ST三F: From our perspective (having admittedly not been in China for over a year now), the hunger for experimentation and the openness to new music forms is what makes the electronic music scene in China, so exciting to us. Maybe because electronic music is a newer phenomenon in China, which meant that multiple genres came into China simultaneously, or maybe because it’s still comparatively underground, China’s electronic music scene is still relatively open to cross-pollination. At clubs across China, like OIL in Shenzhen, Loopy in Hangzhou or ALL in Shanghai, you might find the same faces in different nights dedicated to trance, gabber, bass, techno or industrial. You might even hear all those influences within the space of one night, or even one set!

Just taking some of the core line-up to illustrate, Yehaiyahan, under various aliases has been part of the legendary bass collective Uprooted Sunshine, while collaborating with the underground Chinese hip-hop scene and jungle and d'n'b producers like Kode 9. In the same vein, FunctionLab co-founder GUAN’s electronic techno productions continue to be influenced by his past-life in a punk rock band, while Yider’s sound blends Eastern poetry and traditional instruments with psychedelic electronic sound fields.

With this background, along with SHCR’s connections in the community, we had a good feeling that we would be able to draw on some serious talent for Through the Window. We’re super happy with this talented line-up of core producers and seriously excited with the quality of artists responding to our open call.

Is there a new wave of electronic music artists in China since the pandemic? Is there a new collective direction that artists seem to be taking?

ST三F: From what we’ve seen and heard, the pandemic has impacted artists in China just as it has taken its toll on artists worldwide. In effect, the stability of their livelihoods was uprooted at the beginning of 2020 with the closure of clubs and the inability to perform - even though China has been able to return to a semblance of normalcy much sooner than the west, the reality on the ground is that clubs and parties are still shaking off the effects.

As a result, we’ve seen a powerful surge of new productions from Chinese artists and labels, including SVBKVLT and FunctionLab, as online music sales became one of the few revenue streams available. We’ve also seen an increased interest in overseas collaboration through record releases and livestreams. For example, it was amazing to be able to release the debut EP from Hong Kong’s very own hentai idol QQBBG, while working with DDR-innovator Jiafeng 高嘉丰 and China’s answer to Soundcloud rap Billionhappy for our live-streamed Ceremony series. If the status-quo hadn’t been completely upturned by the pandemic, we may still have been limited in our collaborations by the practicalities of Artists’ tour schedules and when they happened to be in Europe.

Lumi: I think the pandemic (and the subsequent travel embargo) has made music scenes, especially club scenes, in China look inwardly towards the breadth of talent at its own doorsteps. Circumstances have demanded a lot of domestic-heavy line-ups in a live/club context for example. Hopefully this will be a catalyst for organic acceleration within the scenes. Watch this space I guess!

SHCR x Eastern Margins: 通过窗口 Through The Window will be live on 31 January, 8pm to 11pm CHN (12pm to 1pm UKT), via Twitch.tv/Easternmargins & SHCRAD.IO. The event is in collaboration with Chinese digital media agency Tong Digital. The open call ends Wednesday 27 January; to sign up, click here. For more info on the overall event, click here.