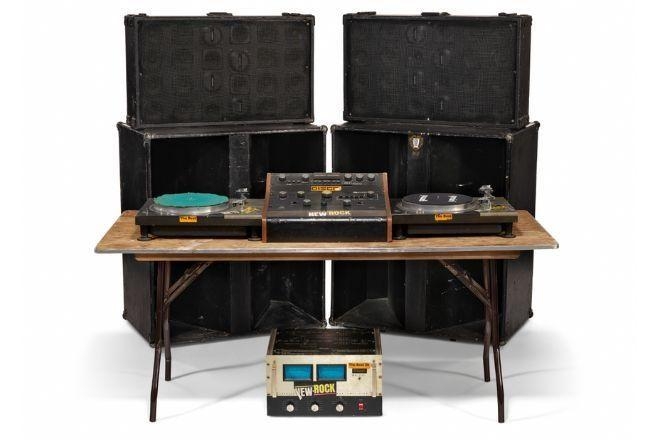 The soundystem was sold in The Christie's auction which took place last Thursday (August 18). It sold for more than $50,000 more than it was originally thought to be valued.

Other items that once belonged to hip hop icon DJ Kool Herc, real name Clive Campbell, and numerous artefacts connected to the history of the genre were also sold during the auction.

Read this next: New documentary explores the early days of drum ‘n’ bass

Kool Herc used the auctioned soundsystem as his "main working soundsystem" from the middle of the 1970s through the 1980s.

Christie’s item description says: "Following his purchase of the Acoustic PA System in 1973, he continued to build his soundsystem, adding additional components over the years.

"Perhaps the most significant early addition was the GLI 3880 mixer, which replaced the eight-channel acoustic mixer, allowing Herc to more easily switch between his two turntables (rather than using two hands to manually switch channels).

"The 300 Watt McIntosh amplifier provided sufficient power to fill a room, playground, basketball court or a park with sound — solidifying its reputation as one of the most dominant soundsystems in the Bronx during the 1970s."

Read this next: Limited vinyl edition version of Eric Prydz’ ‘Opus’ has sold for $2000 on Discogs

The Jamaican-American DJ is credited for helping push the origins of hip hop and the genre's culture in the Bronx through his "merry-go-round" style. Hip hop music's foundation was laid by his innovative breakbeat DJing, which featured creative drum solos.

People like Grandmaster Flash rapidly adopted his DJ style. Kool Herc has also featured on The Chemical Brothers' track ‘Elektrobank’ from their sophomore album ‘Dig Your Own Hole’.

While reminiscing on the soundsystem’s legacy, he is quoted as saying: "That thing cost a lot of money and pumped a lot of juice. It was 300 watts per channel. As the juice start coming man, the lights start dimming. And the turntables, I had the Technics 1100A, the big ones, so it wouldn't turn."

Other products auctioned off include a mixer, a disco ball from Sedgwick Avenue, sneakers worn by Kool Herc, and various images from the early hip-hop heyday of the 1970s and 1980s.

Read this next: Theo Parrish teases his upcoming album with a new single 'This is for you'