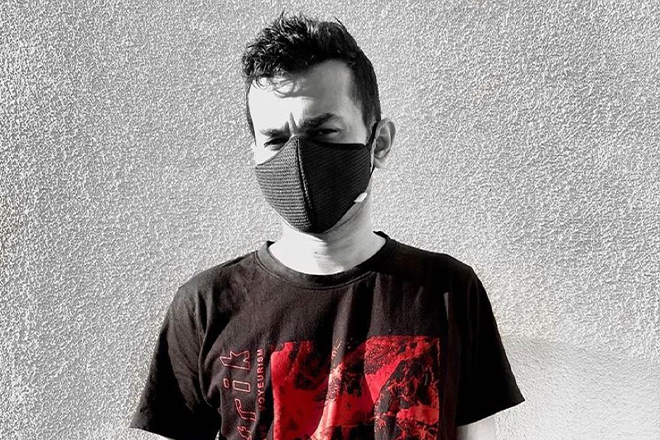 India’s techno pioneer Arjun Vagale has returned with a new four-track release under his moniker AsymetriK. ‘Asymetrik003’ is a heavy, harsh, uncompromising techno record, inspired by broken beat, EBM and industrial music. Following Vagale’s second release under AsymetriK earlier in late March this year, this record includes a co-production (on ‘Wollstonecrft’) and a remix from Southern California-based techno producer Emmanuel Andreas Santamarina, aka EAS (‘Before Dawn’). This third instalment is distributed by Triple Vision NL and is available as 12” vinyl and digital formats.

"Very few things come close to that feeling of holding your music physically (for us producers at least) — extremely proud & excited to finally have Asymetrik003 on wax & in my hands," the artist said via Instagram. "It’s a true DIY passion project, from creating & designing the artwork to making the actual music & everything else in between ... love the way it’s come out & it sounds SO damn PHAT."
⁣
"It’s extraordinarily challenging to put out music on vinyl in these crazy times, so I appreciate everyone supporting this release — for those who haven’t yet, please go ahead & grab a copy, we’ve got a limited amount of records in India too, available via Bandcamp." ⁣⁣

As one of the most celebrated figures of the underground music scene in India, Arjun Vagale has been keeping his head down and preoccupied with a wide range of entrepreneurial moves within and around the periphery of the electronic music market. His brother and he founded I Love Music Academy, a cutting-edge electronic music school that teaches music production, audio engineering and DJing. He also co-founded UnMute, a music management and events agency that centers the electronic music scene in India. He was also the first South Asian to release on Adam Beyer’s Drumcode, one of the world’s most respected and prolific techno labels. He’s headlined Vh1 Supersonic Awakenings, and played at Tresor, Verboten, Baum, Womb, and more. The list goes on to prove that Vagale’s bold and experimental alias is only one of his many groundbreaking endeavours.

Like we said, the list does go on: the artist-DJ-producer-label head has paired his album release with a limited edition merch drop: two black tees—titled ‘Modular003’ and ‘Hungry Like The Wolf’—with aggressive, abstract, dystopian graphics printed in red and white. The designs were rendered from images taken from his previous gigs, and the shirts are being sold in collaboration with Acid Moons, an India-based manufacturing company.