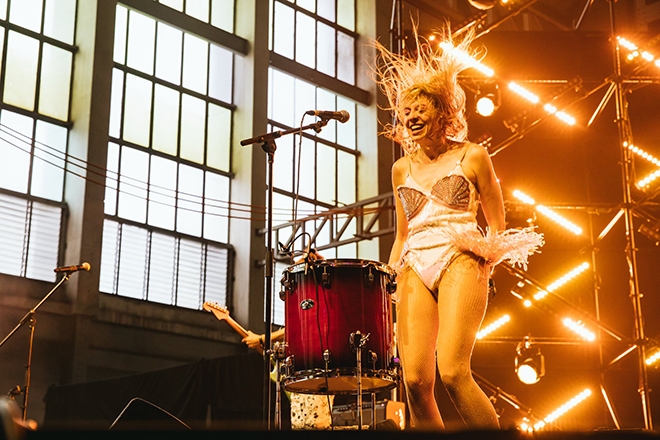 A new business collective based in the Lion City came together to put on an immersive art and music festival this past weekend. The 24OWLS team is made up of the same liberal minds who produced the last five editions of Laneway Festival Singapore, which focuses heavily on showcasing new and undiscovered talent.

The event which took place at a disused power plant, the Pasir Panjang Power Station, over this past Saturday, and featured an ‘idiosyncratic and strong female-fronted lineup studded with international and Singaporean acts’. Some of the acts included Mercury Prize winner Cate Le Bon, the all-female London group Goat Girl, to Ladies of LCD Soundsystem — the synth queens behind Grammy-winning dance-punk icons LCD Soundsystem, and LÉON, the Swedish pop-princess who just announced cancelling her Hong Kong show tonight via social media.

Musically, the line-up embraced an infinite melange of sounds and styles that covered R&B, electronica, pop, rock, synth, and all sorts. And what a breath of funky-fresh air it was last Saturday, as music and art lovers, industry folk and more turned up to witness the freeform expression that stemmed for the organiser’s spontaneity. It’s quite rare for us to witness such a diverse genre-spectrum in Asia, and we certainly welcome more of it.

And as we mentioned earlier, the team’s goal is about sensory exploration and they nailed that core pillar by focusing four female visual artists from around South East Asia, who are also a part of their inaugural Artists-In-Residence programme, a concept which inspires the artists to work in and embrace the studio space and the festival. The four visual artists featured are Mange from Malaysia, Diela Maharanie from Indonesia, OHFUTON from Thailand and locally-based Aeropalmics from Singapore.

Earlier this year, a group of like-minded souls, who proclaim themselves as ‘lovers of culture and all things related to music’, launched 24OWLS, a progressive and liberal, productive think-tank that wants to break the boundaries of sensory exploration, firstly, in their home town of Singapore. Their goal is to create a yin-yang balance against what they call ‘shunning sharp, mechanised music events.’

[Via The Alex Charlie Blake Sessions]