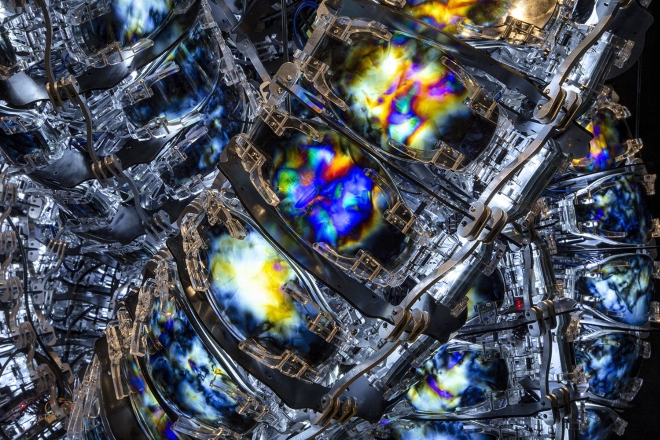 Artist and electronic music composer Yunchul Kim has creatively reconstructed the Korean Pavilion at Venice Art Biennale 2022 into an otherworldly labyrinth. Currently permeating the space are five of his large-scale kinetic sculptures and a site-specific wall drawing.

The presented series titled ‘Gyre’ is inspired by The Second Coming — a poem by William Butler Yeats from the year 1919. Through the written piece, the poet expresses his philosophy of history and the glorious future return of Christ, resonating with Kim's theme of the continuous cycle of beginnings and endings.

The 59th Venice Biennale will showcase Kim’s sculptures that are interconnected along with monumental installations that are powered by imperceptible matter (muon particles) from outer space. In addition, the sole drawing unit of the series illustrates the interaction and co-existing of matter, time, objects and beings in an interlaced world.

Read this next: Singapore’s communal space keeps the arts alive in ‘Approachable’ collab

“In the infinite cycles of creation and extinction, the world and its matter constantly gyrate and descends. ‘Gyre’ explores the world as a labyrinth where ‘mattereality’ matters rather than materiality, embracing non-human objects and material reality,” the Korean artist illuminates.

“I consider my artworks as living beings — bodies that are intra-acting (a Barbadian term) and self-organising like the resurrected ‘actors’ from Raymond Roussel’s surrealist novel ‘Locus Solus’,” Kim explains to ArtReview.

Alternating bases between Berlin and Seoul, Kim is the founder of Studio Locus Solus and a member of the art and science project group Fluid Skies. Other than working as a visual artist, Kim also works on researching ultrafine particles, magnetic fields, lead and mercury in the hope of finding a middle ground between science and art.

The 59th Venice Biennale runs from April 23 until November 27 2022 and you can enter Yunchul Kim’s world of entanglement from the video below.