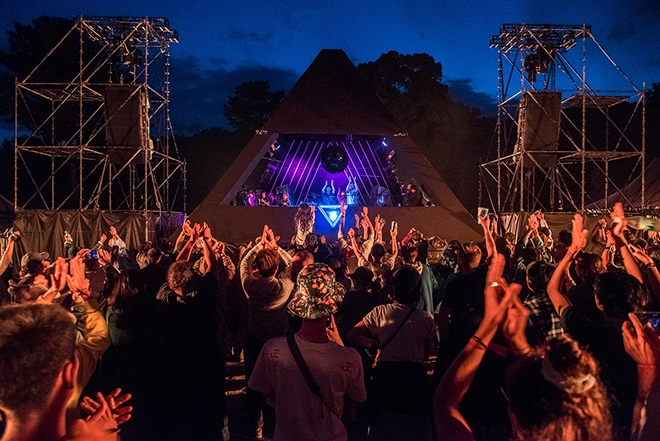 This article was updated on March 14. Anything not listed here is still moving forward as planned and we'll update this article regularly. The show must go on!

It is with such a heavy heart that we write this article, but as COVID-19 sweeps through the world at light speed and leaves the music industry in crumbles, it's our duty to keep you informed. We hope our friends and families at clubs and festivals all around Asia and beyond stay safe and bounce back asap.

Marquee in Singapore has suspended operations until further notice. With several countries now limiting events to around a few hundred people, festivals are no longer the only events affected in the music industry as at least one club so far has shuttered its doors. Marquee in Singapore at Marina Bay Sands announced yesterday that it would be ceasing operations as a result of COVID-19 with Laidback Luke's show scheduled for the same day cancelled (the artist wasn't able to fly as a result of the United States travel ban from Europe). See the statement below.

Rainbow Disco Club in Japan is cancelled. While Japanese events had largely seemed unaffected and the number of infections in the country stands at 734 as of writing, which is significantly less than neighbouring countries, it would appear that the COVID-19 backlash is leaving its mark. Rainbow Disco Club due to take place April 17 - 19 with Moodyman, Motor City Drum Ensemble, DJ Nobu, Antal, Hunee and more. See the full statement below.

S2O in Bangkok has been cancelled. We saw this one coming as Thailand's government has announced that it would be curtailing Songkran celebrations across the country to prevent the spread of COVID-19. Water fights were also to be halted. So it came as no surprise when S2O, one of Thailand's largest Songkran festivals, announced on Friday that it would be cancelling this year's event only to return in 2021. The festival was due to take place over April 11-13 2020. See the full statement below.

Organik Festival in Taiwan is cancelled. Organisers announced today via Facebook that they were left with no choice but to cancel the three day festival that was set to take place on the eastern coast of Taiwan on April 24 - 27. "We understand there are many music fans and our beloved Organik followers who look forward to this yearly event. We are deeply sorry for any inconvenience this decision may have caused and hope that you understand the reasons for which it has been taken. We also hope the situation surrounding the virus gets resolved as soon as possible."

Wanderland has been postponed. With only three days left to the show, Wanderland has announced its rescheduling as the directive of the City Government of Muntinlupa discouraged to hold the event due to "the recent advisory of the World Health Organization (WHO) upgrading the risk assessment of the COVID-19 virus to the highest level". Originally scheduled this weekend from March 7 - 8 in Manila, Philippines with big headliners FOALS, Nick Murphy and Joji and Niki from 88rising performing, postponement of Wanderland is certainly unexpected as they are still counting down yesterday on socials with a video showing a fully-built and decorated stage. Read the full statement here:

Ultra Music Festival in Abu Dhabi has officially been cancelled. The news comes just ahead of its inaugural edition this weekend. A statement reads: “The decision has been taken due to the travel restrictions imposed by some countries and airlines for individuals and airlines for individuals and groups.” The event was originally scheduled for March 5-6 in the DU Arena in Abu Dhabi with Alesso, Eric Prydz, DJ Snake, Major Lazer, and Zedd, amongst many others slated the play. A new date is expected to be announced.

DJ Mag Middle East has been cancelled. While most major events in the UAE have announced they will carry on, including the annual Middle East Film and Comic Con and (for the first time) Ultra Music Festival Abu Dhabi, a major music conference has decided to pull out of it's commitment. DJ Mag Middle East was scheduled as a lead-up to UMF Abu Dhabi at W Hotel Abu Dhabi Yas Island, however conference organisers announced that due to the hotel being under quarantine. Refunds are expected for ticket holders. UMF Abu Dhabi is expected to attract several thousand dancers, and extra medical, health and safety precautions are being put into place in lieu of the COVID-19 outbreak.

Hydeout Festival has announced that it would be postponed to October. The Festival was scheduled to debut in Singapore this April with a line-up that included DJ Snake, Rita Ora, Martin Garrix, A$AP Rocky, Gucci Mane, Yellow Claw, Alison Wonderland, and more. The new festival dates are October 9, 10, 16 and 17 and the event will still take place at The Meadow, Gardens By The Bay. Find a detailed FAQ regarding the postponement here and read the full statement below.

Garden Beats festival in Singapore announces it will continue despite four artists cancelling. Aside from Sabrina Caludio, the latest artist drop-out comes from Blond:ish, who has cancelled their entire tour of Asia. The line-up might be shy of one or two international favourites, but that's no reason to stop supporting your local scene. Tickets and more information for the Singapore event are available here.

Malasimbo Festival in the Philippines has also vowed to keep it's boutique tropical weekender running, and ensuring that health and safety concerns are met at the highest standard, meeting all requirements from both the Department of Health and the Department of Tourism. Grab your tickets for a weekend of music and art here.

WANDERLAND Music and Arts Festival announces it will continue despite four artists cancelling. Nova Amor, Sabrina Claudio, Ari Lennox and Raveena have pulled out of their debut performances at the Filipino festival, but organisers are not shy to continue running the eight year old event, in the hopes that people will escape the atmospheric lull created by the COVID-19 media hype and come out to enjoy great music in a safe and fun environment. 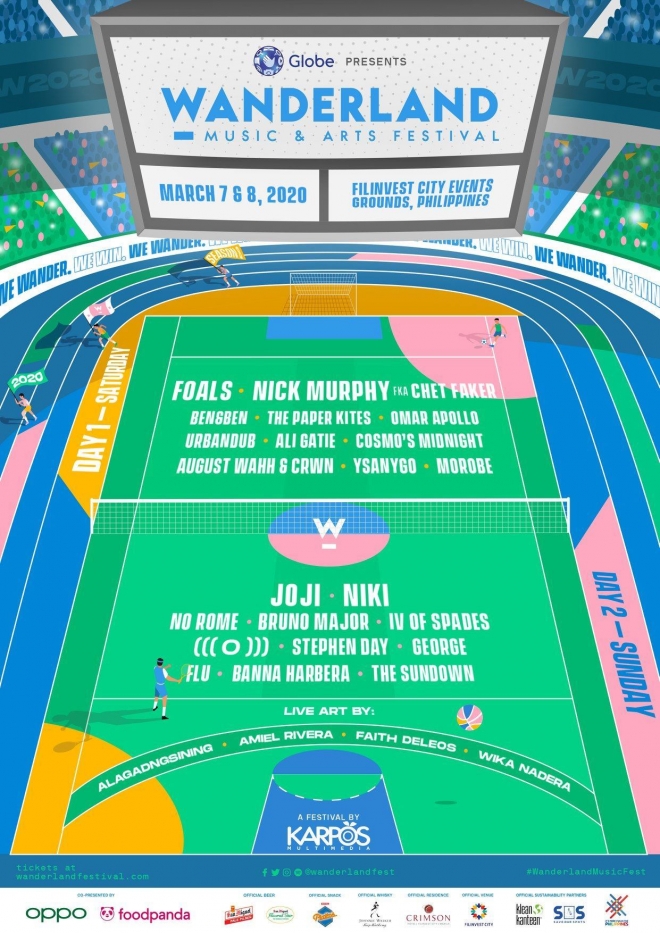 STORMZY's Asia tour has been postponed. Collective Minds has announced that Stormzy's upcoming Heavy Is The Head tour that was to stop in Shanghai, Kuala Lumpur and Singapore will move from March to November, while stops in Tokyo and Seoul Korea remain unaffected. Read the full details below:

Sónar Hong Kong has been postponed. Scheduled for March 28 with Stormzy confirmed to play, the festival will move to a later date in light of the virus. See the full statement below: 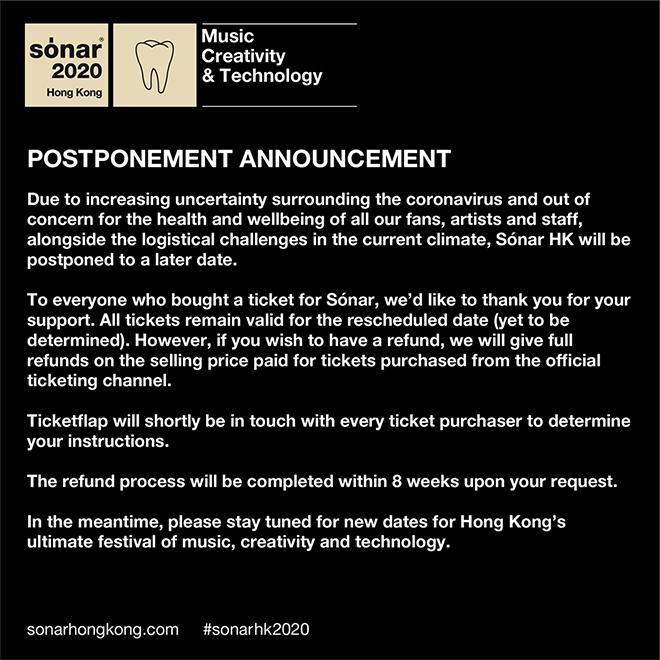 Unknwn Fiesta in Manila has been cancelled. The festival was set to debut on February 22 with headliners like Hot Chip, Friendly Fires, Hercules & Love Affair, Louisahhh and more. Find the full statement below with refund information. We hope their return will be bigger and better. #MakeManilaDanceAgain

Important: The Giles Peterson show scheduled for Friday, February 14 at 222 Arts Club in Singapore will go on as planned. “We hope that as a community, we each do our part to commit to conscious and sanitised hygiene practices. Your health and safety is very important to us. Be well!”

Art Basel in Hong Kong has been cancelled. The art festival, which drew 88,000 people in 2019, has been called off in what is said to have been a very difficult decision. The SCMP reported that “overseas art dealers had urged the fair’s cancellation, and organisers say the unfolding virus outbreak left them with no choice.”