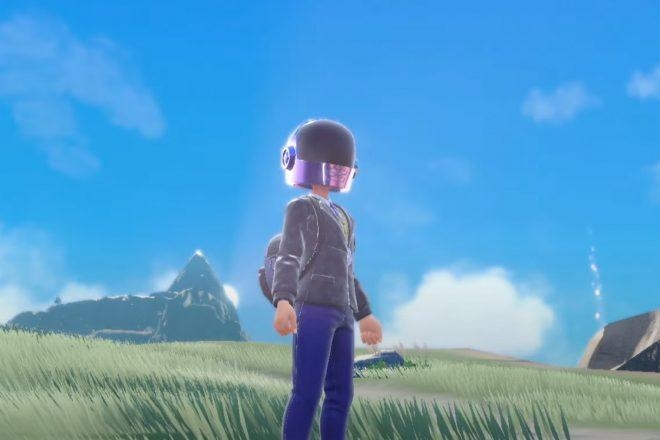 The newest pair of games in the Pokémon series, Pokémon Scarlet and Pokémon Violet, have just dropped on the Switch — and eagle eyed electronic fans have noticed an unlikely tribute to music's favourite robots in the game.

Dedicated players who are willing to put the man hours in exploring the series-first open world map, can find a helmet suspiciously similar to Daft Punk's iconic robot headgear.

The helmet available as part of the games’ character customisation is almost identical to the one worn by Daft Punk’s Guy-Manuel de Homem-Christo with its metallic gold sides and bold black front — and it's said the helmet is pretty easy to catch.

Read this next: You can now turn your Nintendo Switch into a controller

According to hypertext, to get the helmet players must: “Go to Cascarrafa on the West side of the map. Locate the Seguro Style store, it’s near the Cascarrafa Gym building. Navigate to the headwear section of the store. Buy the Cool Helmet in gold. Pay 4 000 in cash or League Points.”

The helmet titled ‘Cool Helmet’ is also available in a range of colours besides the iconic gold.

Last month, Daft Punk joined TikTok with their first post - which featured a fast-paced look at some of their most iconic moments such as 'Homework' to 'Get Lucky' - got over one million views in just 24 hours.

Followers quickly flooded to the page, posting comments enquiring: “What does this mean?” The official account doesn’t provide much hope of a reunion as the bio reads: “Daft Punk (1993 - 2021)”.

Their second video shows a quick clip from the Spike Jonze-directed 1997 video of the track ‘Da Funk’ which has since been anaylsed by Jonze himself which you can watch here.